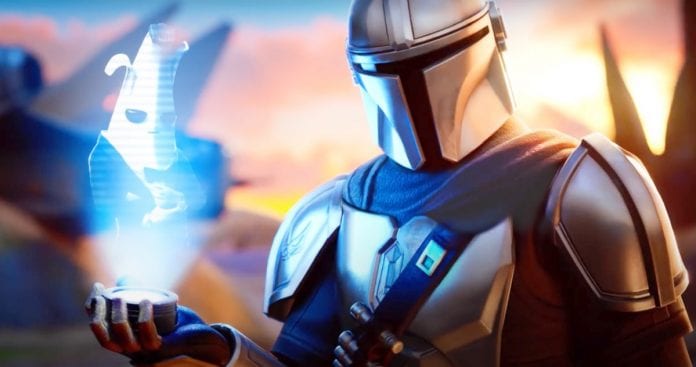 The additions to FORTNITE over the last few seasons have been amazing, but one of the top for me was the addition of The Mandalorian. The great thing was not just getting the skin, it was also being able to take on the Mando himself in the game and get hit jetpack and rifle (which is something you can still do this season).

To my surprise, EPIC Games released a new event themed around The Mandalorian and this one is looking to be a lot of fun! In this game mode, you can play solo, dues, trios, or with a squad and collect galactic credits by taking down bounties or any other opponent you see. You have three lives and must have the most point and take down the Mandalorian as well to win the match.

Something else that is great about this update is the new location added to the desert. This is not just a ship or some small location, this is a recreation of the cantina from Star Wars and I can’t wait to dive in and start checking it out for myself! By playing this mode you will also earn yourself and cool Mando Themed Umbrella to drop into the island with! This right is here is the exact reason I got back into Fortnite after all these years, constant updates to the game, more content every time you log in, say what you will about it…Epic Games is holding it down like none other! Below, you can find the event trailer and full details about the event!

It’s one thing to be the best bounty hunter on the Island, it’s another to be the best in the galaxy. In the new Mando’s Bounty LTM, compete to out-hunt all your opponents — but watch out: if you’re in the lead, you’re the bounty of The Mandalorian himself.

Overcome your opponents — and Mando — to receive a very special reward. Much better than receiving guild rates, we’re talking about a specially-forged Beskar Umbrella.

Playing Solo or with others, collect galactic credits by eliminating the target on your Bounty Puck or any opponent you see. The first to reach the credit goal wins the match (assuming they can prove themselves against Mando first, of course). All players start out with three lives. This is the way.

Want a tip? The Island-dwelling Hunters targeting you and other players are holding the best loot, so take them out to build up your credits AND arsenal.

Need a break from the hunt? Stop by Kit’s new cantina on the Island, located in the desert. Your name is already legendary there.

There’s more than just one Victory Umbrella this Season. As mentioned earlier, for getting a Victory Royale in Mando’s Bounty, you’ll unlock the commemorative Beskar Umbrella. Forged by the ancestral artisans of its alloy metal, this Umbrella bears the signet of a clan of two.

Now more than ever, you are both hunter and prey. Mando’s Bounty is available from today, February 2, to February 9 at 9 AM ET!