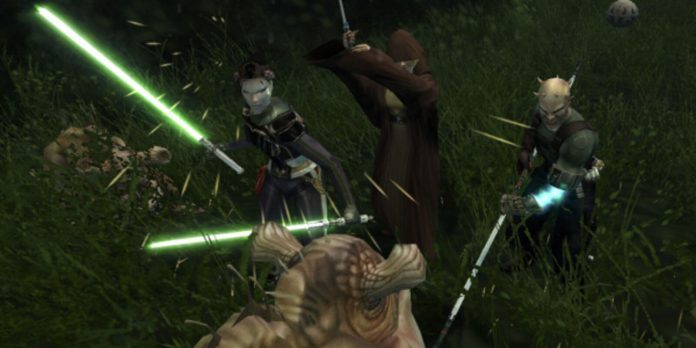 During Star Wars Celebration, Aspyr announced a remaster of Knights of the Old Republic II: The Sith Lords is launching for the Nintendo Switch!

Last year, on top of announcing a Knights of the Old Republic Remake (confirming our reports), they also released a remaster of the original game on the Nintendo Switch. During Star Wars Celebration, the developers revealed you’ll be able to play the sequel on the console very soon!

The game hits Nintendo Switch on June 8th (less than two weeks from now!), and will even bring The Sith Lords Restored Content DLC via a FREE post-launch release in eShop.

“We’re really grateful that we get to work on such amazing and beloved titles for fans of the original game and new ones exploring these experiences for the first time,” says Michael Blair, senior director of Business Development at Aspyr. “With the resolution updates, performance optimizations, and The Sith Lords Restored Content DLC coming post-launch, we hope gamers will see this becoming one of the ideal platforms to dive into the galaxy showcased in Star Wars: Knights of the Old Republic II: The Sith Lords.”

In KOTOR II, you’ll choose your own destiny, with each decision impacting the story. The game features three different classes of Jedi — each with access to specific Force powers and customization options — from which to select, while you command a party of diverse crew mates. But will you choose the light side and save the galaxy, or follow the dark side and destroy it?

Will you be downloading this next month?