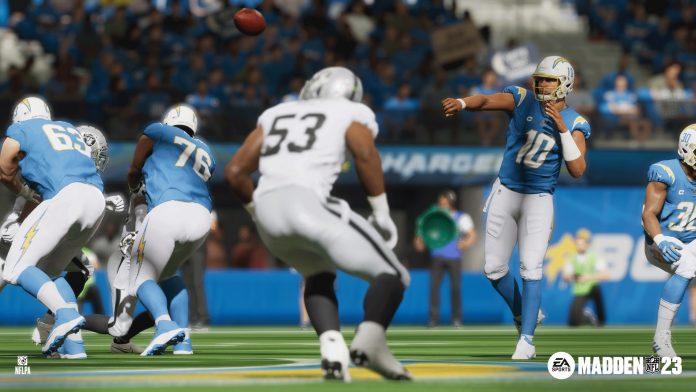 Well, we didn’t have to wait long to get more information on Madden 23, as this morning brings eager players the first trailer for the game:

Not only that, but we also have details on the new gameplay features coming to the title this year:

Through new technology and mechanics, FieldSENSE delivers a gameplay flow with realistic outcomes on the field. FieldSENSE leverages animation branching technology to enable Hit Everything, which redefines the physical interactions during the play allowing players to fight for every inch and change the outcome of tackles – whether mid-air or on the ground. It also provides new mechanics such as 360 Cuts, giving players the ability to change direction on a dime while controlling ball-carriers, and Skill Based Passing, a new way to pass that offers players the ultimate control to place the ball exactly where they want, with the power they want.

FieldSENSE Gameplay System – Players will have more control in their hands at all positions in every part of the game through FieldSENSE, which delivers a gameplay flow with realistic outcomes on the field for PlayStation 5 and Xbox Series X|S versions.

FieldSENSE uses animation branching technology to enable Hit Everything, which redefines physical interactions during play, as well as provides new user mechanics such as 360 cuts, giving players the ability to change direction on a dime while controlling ball-carriers. FieldSENSE also includes Skill Based Passing, a new way for players to have the ultimate control when passing, placing the ball exactly where they want, with the power they want.

Foundational Football: Multiple core gameplay systems have been improved this year, based on feedback from the community, with a focus on three primary areas of foundational football: Pass Coverage, Pass Rush, and Containing mobile quarterbacks