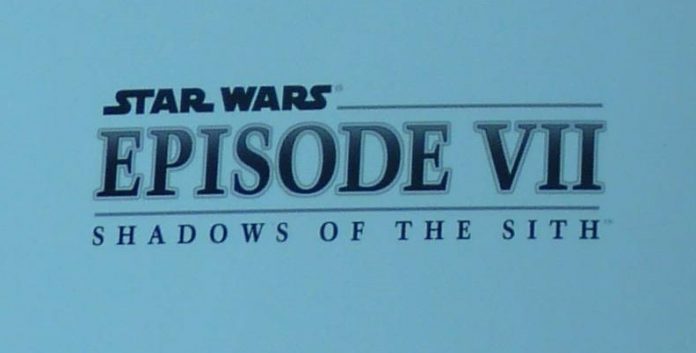 Over the last few months, I’ve had the good fortune to chat with former LucasArts developers about Star Wars games we all enjoyed. Even more exciting, however, has been the fact that they’ve revealed some never before heard details on Star Wars games that never saw the light of day. It’s been a bittersweet process (as some of these would have been amazing to play), but very enlightening as to the goings on within LucasArts at the time.

Rogue Leaders: The Story of LucasArts released in 2008 and revealed some logos for various games that never developed beyond initial ideas/pitches (though it didn’t get a bunch of attention until more recently). As I’ve been digging more and more into Star Wars games which never saw the light of day, I was intrigued specifically by one title: Star Wars Episode VII: Shadows of the Sith.

Obviously this was an idea long before the reality of a seventh Star Wars movie was established. Nonetheless, I was curious to know more about how the developers wanted to tackle the idea. Since there’s been no real information (aside from the logo) released, I reached out to former LucasArts creative director Haden Blackman to see if he could shed some light on the game:

“I know everything about it, since it was my basic concept.  In late 2004, we were focus testing/developing a ton of different concepts — over two dozen in all over about a 6 month period. To focus test, I basically just wrote up a ‘one-sheet’ — a brief description of the game, with a bit of concept art and a logo added.

“We developed a bunch of logos for this exercise, and sometimes used similar names for slight variations in setting or features so we could do A/B testing (does a concept test better when it’s called out that it’s M-rated? Does the time period make a difference if all other features at the same? etc.). Ultimately, it was a good motivation to generate a ton of different ideas in a short amount of time, but it really just validated what we already knew — the vast majority of gamers wanted to be a Jedi/Force wielder, and the setting, story, even the core features were secondary to that.”

This certainly explains all those logos we’ve seen and is an interesting look at how LucasArts was developing ideas for future Star Wars games. The timeframe here is also interesting, meaning the initial idea for Shadows of the Sith came about BEFORE Revenge of the Sith hit theaters. Back then, of course, George Lucas was adamant that Star Wars movies would end with the Prequels, so the game would have served as the sequel fans wanted (hence the Episode VII title).  What would it have been about though?

“Episode VII: Shadows of the Sith would have put you in the role of an adult Ben Skywalker,” Haden explained, “who was walking the line between the light and dark sides of the Force, unleashing new Force powers never-before-seen in games or movies as he investigated a new threat to the galaxy (a Solo…).”

If you hadn’t read the previous Star Wars Expanded Universe books, Ben Skywalker was Luke’s son with Mara Jade, who was born during the New Jedi Order book series. His first appearance/birth happened in Edge of Victory: Rebirth (2001) and he became a more central character in the galaxy in subsequent books. Shadows of the Sith, then, would have tied into the books AND movies while still forging its own path. It’s also interesting that the villain would have been an Solo child, something that eventually happened in the books and even within Star Wars: The Force Awakens.  I guess Lucasfilm just has it out for the Solo children….

Since the idea was thought up in 2004, long before the Disney merger was even a thought, how come it never happened? Blackman explained:

“Again, most of these were just short, on-paper pitches, which I wrote. The only one that had more traction — dozens of design documents, concept art, and even a few prototypes and pre-vis videos — was Scum and Villainy, a bounty hunter game.

“Eventually, I ended up pulling elements from several of the pitches to craft the pitch for The Force Unleashed. As we wrapped up TFU, I started working on some new concepts and revisited the far-future concept under the name “Shadow of the Sith.” The Darth Maul idea was also briefly resurrected after TFU2, and different versions of 1313 reused either the Underworld or Scum & Villainy codenames.”

Basically, the ideas of using new Force powers and balancing between the Light and Dark was folded into The Force Unleashed games. By the time he was revisiting the idea, it was too late.  Not to mention the fact that Haden left LucasArts shortly before Force Unleashed 2 released.

For fans of the Expanded Universe who read all the books (like me), it would have been very neat to play around in a game starring a character who’d only been in the books so far.  I would have loved the opportunity, but considering the state of things now, it’s probably for the best it never came to pass. Regardless, it’s yet another Star Wars game we can add to the massive list of titles we never got the chance to see.  What do you guys think about this idea? Is it something you would have enjoyed playing?

Once again, huge thanks to Haden Blackman taking time out of his schedule to chat with me.  If you missed his previous conversation with us on the site, be sure to check it out.