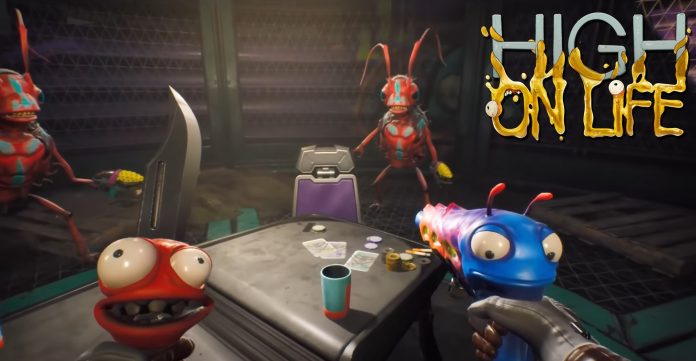 One of the craziest games we saw announced this summer is Squanch Games High on Life. If you didn’t know Squanch Games is a studio started by Justin Roiland, co-creator of Adult Swim’s Rick & Morty / Hulu’s Solar Opposites, and Tanya Watson, Games Industry Vet / Current COO of Bad Robot Game.

Recently, Squanch Games did an in-house interview with their Narrative Director Alec Robbins to talk about the wild universe were about to explore this October. Below is the interview via the Squanch Games Website:

WHO ARE YOU!? What are you working on to create the wild-ass story that is High On Life?

I’m the Narrative Director, which means I’m basically trying to hold the story together and make sure the game’s funny. If the game isn’t funny, you have my full permission to yell at me online.

Let’s set the record straight: An alien cartel is using humans as drugs. How does a story like this come to life?

Justin had already had this idea in his head for years before I came on board, so it’s his baby and I’m just raising it. Basically, in this metaphor, I married Justin and I’m helping him raise this game as my step-child. Now I just kind of babysit our step-child and teach them how to talk better and swear more.

What is it about High On Life that makes it so squanchy? The “squanch-factor” if you will.

The premise of the game itself is already a pretty high-concept sci-fi story, and we love sci-fi at Squanch because it kinda gives you carte-blanche to do whatever you want. Literally anything. For example, I could say there’s a planet of aliens who don’t know how to pee, so they just die from bladder atrophy and sepsis. And you have to believe me because we don’t know everything about space. That planet’s not in the game but it could be if we wanted it to be.

Those talking guns…we can’t get enough of ’em. How do weapons weave into the High On Life story?

In real life, I’m very scared of weapons. If I saw a real gun I’d faint. But in our game, the guns can talk and they’re your friends. Every weapon you use in the game is alive and it can yell at you if it wants to. Not only are they your main tool during combat, but the talking guns are also necessary for navigating the story of High On Life – you’ll use them to converse with alien NPC’s across the galaxy. They each have a different personality voiced by amazing comedians and you can swap ’em around at will whenever you feel like it.

What’s a player up to throughout High On Life anyway?

You’ll play as an aimless human teenager who suddenly finds themselves teaming up with a talking alien gun to take down an evil alien drug cartel. A classic Bildungsroman.

You’re in a recording session with some of the awesome voice talents behind the High On Life characters? What’s going on behind the scenes with these absolute vocal legends?

We did almost all of the voice records remotely because of COVID, so you’d see me at home in my underwear saying things like “That was great, can you give me one more as an option?” or “Wow, did you know you also do the voice of Bugs Bunny and now you’re in our insane game?” – but really, I’m such a huge fan of animation and getting to meet so many amazing voiceover artists one after the other was a dream come true for me. They’re amazing.

Maybe a play is familiar with one of our other (really F#£@%!& awesome) games like Trover Saves the Universe? How does High On Life compare?

Trover is great, but the fact of the matter is that this game is just bigger in basically every way imaginable. You can really feel how much the team wanted to spread their wings and aim higher with this one.

Hard-hitting questions right here: Out of everything you’ve dipped your toes into from Day 1, what’s been your favorite part of the game to watch come alive? Anything people need to keep their eyes peeled for during gameplay?

We have such an amazing team working on this game and it never stops being amazing when I see different aspects of the writing finally come to life, like getting to see a character animated and voiced in-game, or seeing what the final art for a planet looks like, or getting to actually jump in and play through the levels we meticulously planned out together. That’s always my favorite part. Oh, and I got to do some voices and that was fun, too.

As Squanch’s entrusted Narrative Director extraordinaire, what are a few features that have to make their way into the game for optimal squanchy experience?

One of my favorite things in game design – and I’m lucky because this is very much the Squanch house style – is when I try something weird in-game and the game has somehow accounted for that. Like, a mundane example is how in Mario Odyssey, you can sometimes climb up “out of bounds” and you think you’re pulling one over on Nintendo but then you see they left you a pile of coins up there as a little wink. Like a “good work, but we’re still in control” sort of thing. And we like to do that sort of thing but with jokes. We obviously can’t catch everything, and this sort of thing is always the first to get cut because it’s “extraneous” or “not funny enough” or “an insane idea that would be a waste of development time” but we try to surprise the player as much as possible.

Why is High On Life so weird and bizarre and cool and important to add to people’s game libraries?

It’s not. This story is not important. Who told you it was important.

So, from what it seems High on Life will be just as crazy as their previous titles. This game is set to be released October 25th for Xbox and PC and I can only hope we get some weird collectors edition of the game with a replica talking gun! Check back here soon for more news on the game.