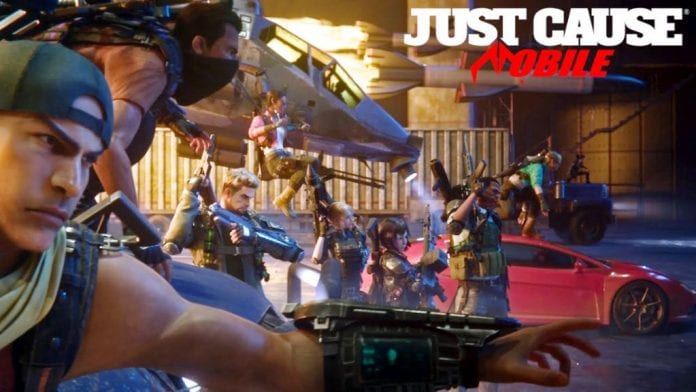 During their Square Enix Presents showcase, the company revealed new mobile titles for Just Cause, Hitman, and even Space Invaders!

While all eyes were on the console reveals and debut for Life is Strange: True Colors, Square also revealed some upcoming mobile titles based on some fan-favorite franchises.

Expanding the series, Just Cause: Mobile delivers the explosive action of the Just Cause universe to your fingertips in action-packed, single-player and multiplayer experiences that offer on-the-go grappling, gliding, and shooting, all presented through exhilarating top-down gameplay. Featuring in-game cutscenes and fully voiced characters, players can customize their agent and join the ranks of Firebrand, a special division within the covert organization, “The Agency.” The mission: stop a new mercenary group under the name of Darkwater. Darkwater is a group made up of ex-Black Hand military forces from overseas that are now a major threat to The Agency across the globe. As a new recruit of Firebrand, day one starts off with a major attack on the base – one that the player narrowly escapes alive. Firebrand leader Carmen Padrón gives you the order to further investigate the mercenary group Darkwater and track down allies to assist you on your mission, including her former agency partner Rico Rodriguez

Throughout the campaign, players will come across well-known characters from the Just Cause series who will give important intel on the enemy and assist players as they embark on missions. Team up with battle-hardened mercenaries such as Annika & Teo from Just Cause 3 and locate the whereabouts of ex-Agency legend, Rico Rodriguez.

The Just Cause: Mobile campaign will take place across three sprawling open-world locations around the globe. Track down Darkwater and take them out using a huge arsenal of weapons, vehicles, and gadgets! Expand and upgrade your loadout as you progress through the story, multiplayer, and challenge mode missions.

Just Cause: Mobile will be free on devices later this year.

This new game takes the Iconic franchise in an exciting new direction, delivering players a compelling and completely new experience through its blend of proprietary AR technology and modern art style. The beloved IP is among the highest-grossing game franchises of all time and a premier brand within the Square Enix group portfolio.

“We are extremely inspired by our collaboration with TAITO to re-imagine the Space Invaders franchise in a contemporary way while shaping it to our ambitious vision of what it can be on mobile,” said Patrick Naud, Head of Studio of Square Enix Montréal “At Square Enix Montréal we are huge fans of the franchise and the team has risen to the challenge of showing how all-new technology can breathe fresh energy into a game as timeless as Space Invaders.”

Harkening back to the series’ legacy of technical innovation, the game lets players interact with the real world via augmented reality gameplay in a new and delightful way. Players will defend the world against an invasion wielding the magic of AR and the power of mobile devices.

Register here for more updates and learn about when this new Space Invaders game arrives.

Hitman Sniper Assassins is slated to hit Android and iOS at some point this year.

Which of these new mobile games are you most looking forward to playing?

Everything Is Canon: Made In Korea