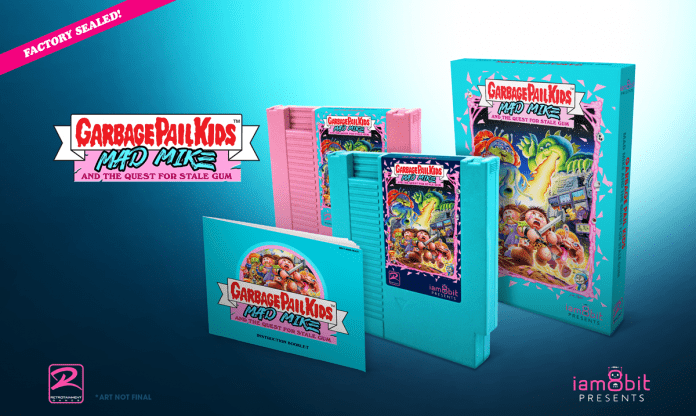 Developer Retrotainment, through the publishing of iam8bit, have announced a brand new Garbage Pail Kids video game launching this month made entirely in 8-bit.

Fans of retro games and Garbage Pail Kids have something new to look forward to this month, with the arrival of Garbage Pail Kids: Mad Mike and the Quest for Stale Gum. The upcoming title is built for the NES and will even launch a physical cartridge early next year that you can literally pop into an old Nintendo to play!

The digital edition of the game will launch for all consoles and the PC on October 25th. You’ll have to wait a little longer for the physical release, but pre-orders for those are available right now:

The Garbage Pail Kids are ready to party like it’s 1985 again. The gross-out icons are hopping off the trading cards and into your TV thanks to an all-new NES game – yes, you read that correctly – from iam8bit Presents and Retrotainment, in collaboration with and under license from Topps, the brand creator. Garbage Pail Kids: Mad Mike and the Quest for Stale Gum cartridges are now available for pre-order on iam8bit.com. The 8-bit platformer will also be available digitally on console and PC on October 25, supported by a suite of quality-of-life features and bonus content developed and curated in partnership with the team at Digital Eclipse.

“For years we’ve wanted to bring the Garbage Pail Kids to life in 8-bit form and we’re honored that Topps allowed us to give GPK the game it’s deserved for 30+ years,” says Tim Hartman, producer at Retrotainment.

Players can instantly swap between each kid depending on which challenges they’re facing at any given moment. Tricky side-scrolling levels including Egypt, Transylvania, and Hell will test the mettle of even the most hardcore old-school gamer. Players can collect and trade 8-bit versions of the official Garbage Pail Kids cards, including some that can be used in battle (Adam Bomb, anyone?). Minigames, including porta-potty fishing, round out Retrotainment’s loving tribute to Garbage Pail Kids and classic retro games.