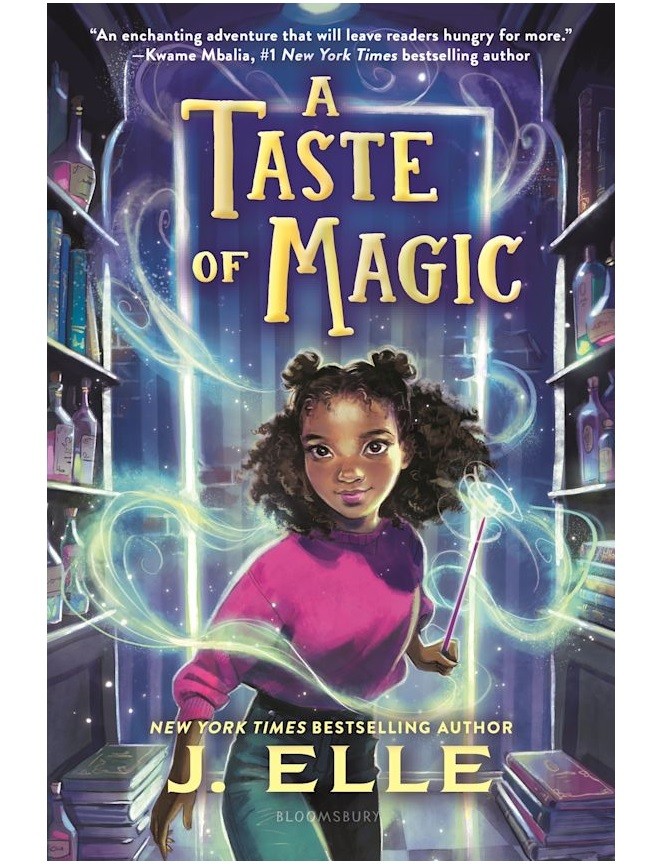 New York Times bestseller J. Elle makes her Middle Grade debut with A Taste of Magic, a delightful new series about a girl who bakes up a plan to save her inner-city magic school.

Twelve-year-old Kyana has just discovered she’s a witch! This means classes every Saturday at Park Row Magic Academy, a learning center hidden in the back of the local beauty shop, and Kyana can’t wait to learn spells to help out at home. The only downside is having to keep her magic a secret from her BFF, Nae.

But when the magic school loses funding, the students must pay huge fees at the fancy school across town or lose their magic! Determined to help, Kyana enters a baking contest with a big cash prize. Will she be able to keep up her grades while preparing for the competition and without revealing her magic? What about when a taste of magic works its way into her cupcakes?

To the best of my knowledge there wasn’t anyone saying J. Elle, author of the excellent Wings of Ebony series, didn’t have the chops to write a Middle Grade (MG) series, or was a one and done. Knowing authors, I’m sure any doubt that indeed existed, was internalized, and she was the sole proprietor of this uncertainty. So, let me speak directly to the author for just a moment…

With A Taste of Magic, you have produced not only a solid and entertaining MG reading experience, something you can add to your growing skillset, but you have proven that you are in fact, here to stay, and we’ll be reading your books for a long, long time.

So, pat yourself on the back, treat yourself to something nice, take a bow, however you wish to celebrate, do so, you’ve earned it.

There are of course mechanical aspects to writing, and those will change depending on your genre of choice. Take MG for example, which is generally 30,000–50,000 words, rated “G” when it comes to content restrictions, appropriately aged protagonists (10-13), and a narrower mindset. These aren’t determinate of course, nothing is, but you get the general idea. That’s the habitual part, beyond that, MG works best when fantasy meets reality, when ethereal worlds full of magic and wonder collide with the pressure-filled powder-keg of awkwardness that is middle school.

Yes, it’s a precarious time for youngsters who are going through acute cognitive and physical changes, as their bodies are stuck in the “in-between”, as in no longer kids, but not quite teens yet either. This is why the “kid who experiences a magical awakening” trope is the perfect allegory for this genre, they are a walking emotional contradiction.

It didn’t surprise me that J. Elle can write a good/sometimes great MG story. While her Wings of Ebony series was a dire affair; it is fraught with real-world implications and thoughtfulness, leaning on a teen’s ability to ruminate, to look inwards as they discover more about not only themselves, but the world around them. And because it’s J. Elle, things like gentrification and racial and socio-economic ills are ever present, issues that can affect a 10-year-old as much as they can affect an 18-year-old. Now, I’m not accusing J of being narrow-minded or conspicuous, these are issues that are very important to her so of course, and like many other writers, they find their way into her narratives, writing from a lived experience.

Anyways, like the summary says, Kyana Lacreshia Turner lives in the Park Row neighborhood of Rockford and goes to Thomspson Middle School with her best friend, Nae. Kyana finds out she’s part of a much larger—and secret—magical community that goes back generations. So, she must also attend a magical school for six months to learn this newfound gift, and if she doesn’t succeed, those powers will become forfeit. Harsh to be sure, but there are reasons for this as you’ll find out once you get into it.

She immediately makes friends with the diffident Ashley, a legacy witch, who along with Kyana, is hoping to land one of the two coveted “Charms” selections. Another one aiming to be a Charm“er”, a thorn in the side of Kyana, is her Thompson customary schoolmate and nemesis, Russ. And like that world, Russ is cocky, mean-spirited, and already excelling in Magicks, much to her chagrin. Basically, he’s the bad boy of the Park Row Middle Grade/Magic School social scene. So, the only thing worse than having to attend one school full of social anxiety, emotional pitfalls, curricular pressure, and Russ types…is having to attend TWO schools full of social anxiety, emotional pitfalls, curricular pressure, and Russ types. And if that wasn’t enough, Kyana can’t talk to Nae about any of this, it is strictly forbidden for Magicks to reveal their abilities to non-Magick families. Will her relationship with her best friend bend, or will it break?

Concerning the magic, J doesn’t break too much ground here although the magic/baking theme, as a tandem narrative, is quite effective. And the systems in place, Charms and Potions, the nuts and bolts of it, are analogous to the more technical aspects of baking…attention to detail, getting it just right, unique nomenclature. If you’re looking where J separates herself from the pack, the devils in the details, with a fair bit of in-universe elements and terminology, creating a nice foundational canon, one that I’m sure we’ll see expand over the course of the series. From its deferential ancestral leanings to a blithe groit rights movement angle (you’ll see), the magic in A Taste of Magic is both tangible and clever.

That’s the sizzle, the steak, the core of the story, and the book’s best moments, is the three generations of Turners, each of them perfectly accessible to the reader in some way. Doubtful anyone of us can’t find something to relate to or sympathize with from this lot of admirable women. And as a lead, Kyana is fallible, she’s not a great student, not always an attentive friend, and is of course susceptible to peer pressure like anyone else. Combine that with an over-worked, stressed out single mother, a feisty grandmother who is requiring more and more care as the days go by, and you’ve got yourself a pre-teen who’s old before her time, with the weight of the world on her still young shoulders. In so many ways, this is a modern family in today’s United States, magic removed of course, and is the heart of the book in my opinion, the family theme, genetic or otherwise.

As for the antagonist, while there are some shady individuals and high ranking magic board members with ulterior motivations, it’s less a singular physical presence and more a litany of social issues including poverty, population density, immigration stresses, civil rights, and economic and racial discrimination. But the most important issue the book tackles, the one that resonates strongly with what’s happening today is funding, school closures, and kids/families having to relocate. Yes, bureaucracy and assorted “ism’s” are the prevalent villain in this story, that ubiquitous dark shadow that grabs headlines every minute of every day of our lives. This bit might seem like milquetoast in a story infused with magic schools, otherworldly creatures, and delicious baking, but these are the kinds of issues facing us today; the ones right out front our windows.

The top down social and economic cost of school closures in the US of course disproportionally affects society’s most vulnerable and marginalized groups. Not only does it interrupt and create gaps in learning, resulting in all sorts of negative side-effects for the kids, but the effects on the system seem insurmountable, with unintended consequences such as high costs, poor nutrition, anxiety/stress, and social isolation. With a background in education, I know for a fact this is a very important issue for J. Elle. And as a storyteller who effectively uses messaging to petition the concerns of her audience, it’s unsurprising that it shows up in this book. Her reasoning is shaped by her own outreach, understanding all too well the urgency and affairs within her community, and that messaging does in fact matter.

But not to worry, it’s not all heavy-handed as J has some fun with the material as well, especially on the baking side of things. It’s a wonderfully fun premise, having so much at stake, so much weighing on the outcome of a baking contest, and this is just part and parcel with some of the lively and imaginative world-building and narrative choices we get in this first book of the Park Row Magic Academy series.

The first book in a series is obviously less about resolution and more focused on establishing canon, world-building. It’s one thing to get to know the characters who will be our guides throughout this journey, but we must understand the world in which they exist to fully appreciate their motivations, fears, and desires. On these points, A Taste of Magic succeeds greatly.

With a near-perfect balance of character introductions, not-so tedious exposition, real-world implications, and in-universe story construction, this is a very good Middle Grade debut from J. Elle, and I can’t wait to see where the story goes next.

A Taste of Magic is out now, click HERE to get a copy today!

J. ELLE is a prolific Black author and advocate for marginalized voices in both publishing and her community. Her New York Times bestselling debut novel, Wings of Ebony, is an NAACP Image Award Nominee for Outstanding Literary Work for Youth and Teens. Wings of Ebony sold in a six-figure pre-empt and is part of a YA fantasy duology about a Black girl from a poor neighborhood who learns she’s magical. Wings of Ebony and her follow up Ashes of Gold are lead titles for Simon & Schuster’s Millner Books.