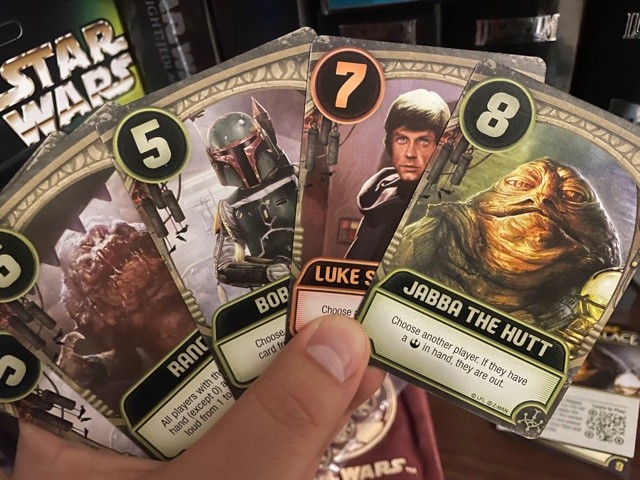 Star Wars fans looking for a fun, relatively quick new card game to play have a new option with the launch of Jabba’s Palace – A Love Letter Game!

While tabletop gaming isn’t my big thing, I’ve always been a sucker for card games. Hell, we made one here! I recently had the chance to get my hands on the latest release from Z-Man Games, which takes the “A Love Letter Game” formula and gives it a Star Wars twist.

The lair of the galaxy’s most notorious gangster is a place of danger and deception. Based on the beloved game Love Letter and set in the Star Wars universe, players compete using members of the Rebel Alliance and denizens of Jabba’s Palace to outwit and outlast one another.

If you haven’t played any Love Letter games before, don’t worry, they’re relatively easy to pick up. Unlike most card games, they keep things simple with a super small deck. Jabba’s Palace consists of only 19 cards and four “agenda” cards. Unlike TCGs/CCgs or build-up games, the gameplay doesn’t come from the deck/hand you use. Instead, it’s all about HOW you use the cards being dealt.

This is also a bit different from other versions of this game (where the goal is to sneak a “love letter” to a locked away princess), in that the win conditions of the game can change. The agenda cards set the parameters for victory in each game that the players (ranging from 2-6 people) will have to try and meet. Multiple rounds/victories will happen in a single game before an ultimate winner is chosen.

It’s a ridiculous amount of fun, and it’s shocking how much strategy goes into it considering there’s only a handful of cards you’re dealing with in general. It really forces you to think ahead and be more discerning in the moves you make with your cards. It’s not like you have a full deck of other cards/plays to fall back on if you make a mistake. Every play counts.

That said, it’s really easy to get started. There’s not a lot of convoluted rules and even those who aren’t as familiar with card games can get into it quickly. Yet it offers enough depth/strategy to give more hardcore players plenty to enjoy.

What I enjoyed most about this Jabba’s Palace game, however, is how quick it plays. Each game only takes about 15-20 minutes. With little setup required, you’re able to sit down and have fun in short bursts. With a house full of teenagers dealing with school, sports, and generally being too cool for everyone, sitting down for hours long tabletop games just isn’t much of an option. Here though, we can play a few quick matches and go about our evenings!

Even better, it’s small card count means it all fits in the nice draw-string pouch that comes with it. You can literally carry all the cards, tokens, and instructions in your pocket and bust it out as needed. The bag is embroidered and looks nice (something collectors like me always considered), which will keep your cards relatively safe.

I was impressed at how durable the cards seemed to be. They’re thick without being bulky, and don’t feel super flimsy. These are going to be able to take some wear and tear. Which is great considering they each feature some really stunning artwork on the front and back. So even if you aren’t going to be playing it a lot (just looking to add to your Star Wars/gaming collection) it’s going to look nice.

All in all, Jabba’s Palace – A Love Letter Game is a hoot. Card game lovers will have a blast trying new strategies with the various scenarios, and it’s easy enough to get everyone in on the action. Combined with impressive artwork and easy portability, this is an easy recommendation for Star Wars fans and gamers at only $15.

The game is available TODAY online directly via Asmodee, on Amazon, and other select retailers.