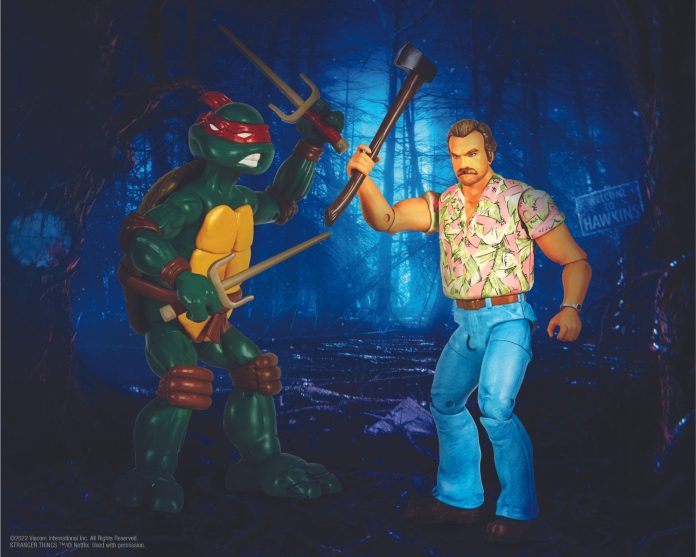 It’s a strange crossover, but certainly not one I’m complaining about as new two-pack figures bring the Teenage Mutant Ninja Turtles and Stranger Things worlds together!

There’s no real reason for this crossover to be happening (other than sharing an 80s connection), but honestly I don’t care. Two of my favorite things coming together with new toy sculpts for a unique toy set is all I need to know! Today, Playmates have revealed the Stranger Things Upside Down Remix; a new (limited) series of figures pairing the iconic Ninja Turtles with characters from Stranger Things.

As they did with the Cobra Kai toy crossover, these sets will be Target Exclusive figures and will arrive starting this October:

In the new action figure line, Nickelodeon’s Teenage Mutant Ninja Turtles come together with favorite heroes from the Netflix hit series Stranger Things in two-packs suitable for ages 8 and up. The Turtles come appropriately styled sporting red bandannas based on their look from the original 1984 comic book, pairing perfectly with the mid ‘80s outfits worn by the Stranger Things characters.

Each figure in the collection stands six inches tall and is highly poseable with multiple points of articulation. Each Turtle comes with his iconic weapon twin katana for Leo, twin sai for Raph as well as portable cassette players and waffle-throwing stars, while the Stranger Things characters come equipped with accessories featured in the TV series. Eleven comes with her signature backpack, handheld phone, and flashlight. Hopper comes equipped with a spiked bat, axe, handgun and flashlight.

Yes, those are Eggo Waffle Ninja Stars and I’m in awe of the fact this is a thing that exists. The sculpts look pretty great too, and come in at the 6-inch scale I’m so very fond of.

Two sets will be available at launch in October, with pre-orders live now: Leonardo and Eleven, and Raphael and Hopper. It will wrap up in February 2023 with the arrival of two more sets featuring Donatello and Lucas; Michelangelo and Dustin. I might have to break my “no toys except Star Wars” rule for these!