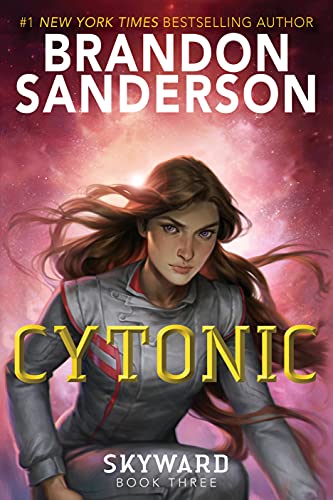 The third novel in Brandon Sanderson’s science-fiction series, Skyward, arrives this week. Cytonic retains the fun and adventure, even as it feels like a sidequest to the main story.

Sanderson is one of my favorite working authors today, and pretty much every release of his is a big deal in my household (my older kids share in them with me now). One of his more recent series, Skyward, has caught my attention for delving so far into the science fiction genre (where the author normally sticks with fantasy). We haven’t had the opportunity to review the previous books in this series on the site, so if you’re not familiar with them yet, allow me to BRIEFLY give you a run down.

The series puts the focus on teenage star fighter pilot. Spensa Nightshade. Her dreams of being a hero of old stories and redeeming her father’s name puts her in a position to change the galaxy in big ways.

As the battle over their home world, Detritus, expands to the larger galaxy, Spensa ultimately leaves her home to find out why aliens are looking to wipe out humans. Even worse, there’s a race of inter-dimensional beings known as the Delvers, with the potential to wipe out life in the universe as we know it. All the while, Spensa must contend with the regular issues of growing up and coming to terms with her strange mental powers called Cytonics.

Yeah, there’s a lot going on. If you haven’t read them yet, I STRONGLY encourage you to do so. Not only because I’ll be mentioning some spoilers in this review for the previous books, but also because they’re just really damn good. All right, let’s talk Cytonic!

Considering the previous novel in the series, Starsight, ended on a cliffhanger I’ve been very eager to see what comes next. In a desperate attempt to escape her attackers (who were also overthrowing the current government) launches herself into a strange portal, a portal she’s seen exiles get tossed into.

Cytonic picks up the story right after this, showing exactly where Spensa was transported to: the Nowhere. This strange place sits outside of time and space, where nothing is what it seems. It’s a dangerous place, where floating pieces of land from other worlds stretch outward.

The Nowhere is also where the ever important “acclivity stone” material is harvested. This is what allows spaceships to travel, and is a highly coveted resource in the “somewhere.” Unfortunately, Nowhere is also the home of the dreaded Delvers, and they are none too pleased to find Spensa intruding in their lands.

With war raging in the outside galaxy, Spensa must find a way to escape the Nowhere in order to return home and help her friends/family from destruction. Along her journey Spensa encounters an adventurer pulled straight out of the stories, bands of pirates, Delver possessed enemies, and ultimately the history behind the powers she holds.

The entire story of Cytonic takes place within the Nowhere, with only some brief hints as to what’s going on with the characters/story going on elsewhere. To be honest, it threw me off at first, as I could have SWORN the initial announcement for this series was that it would be a trilogy. That’s, apparently, not the case and Cytonic isn’t the conclusion I was expecting.

Regardless, it’s another ridiculously fun adventure and it didn’t take me long to shake-off that initial confusion. Like the previous novels, the pacing is blistering and before I knew it, I was already nearing the final chapters. I became so absorbed in the story and characters (most of whom are entirely new to the series) that I was hard pressed to set it down. Between the action, humor, and character beats, chapter after chapter flew by in a blink.

Pretty accurate to say I devoured this novel and now I find myself in the same position as before, eagerly awaiting to see what happens next to Spensa. That said, the wait feels just a tad more frustrating this time around, as Cytonic really feels like it’s more of a side-adventure (something you’d see in the novellas set in the same universe) rather than the next main entry in the story.

Again, it takes place entirely in this new location, eschewing the larger conflict that erupted in the previous novel. On top of that, the story is comprised almost entirely of new characters. To be fair, that was much the case with the previous novel as well, but being set in the Nowhere, there’s a distinct disconnect between these new characters and the story on the whole. It’s implied they plan on staying in that area, and might not have any other impact on the remainder of the series.

Plus, most of the plot really revolves on Spensa’s internal struggles as well as her learning more about her powers. These are pretty necessary moments, and the bit of history/lore we gain along the way will most definitely have an important impact on the bigger story of the series. In terms of THIS novel, however, it feels like little more than set-up for the future.

It feels like a hard thing to complain about, or hold against the story. Cytonic is still very much an engaging tale, but it’s the most noticeable book in the series to feel like it’s just a stepping stone. It doesn’t work as well on its own, sitting apart from the franchise, and it’s setup makes it feel like the bigger story is happening somewhere else entirely.

All that said, if you’ve been digging the series so far, or are looking to fill your holiday reading with some Science Fiction, I strongly encourage you to pick Cytonic up. The characters are a blast, the story keeps you hooked, and the action remains top-notch. While I would have liked to no more about the bigger conflict going on, it’s another fun novel in a series shaping up to be something epic. 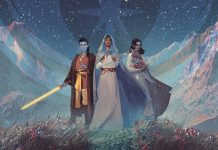