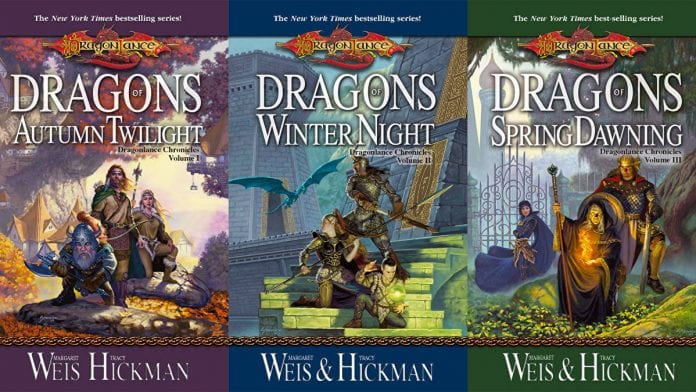 While it looked like a legal dispute would end up putting the Dragonlance book revival to bed, things are back on track with the first book possibly hitting this year!

If you haven’t been keeping up with the exciting world of fantasy author/IP litigation, you may have missed out on this one. Last October, Margaret Weis and Tracy Hickman (the authors who created Dragonlance back in the 80s) filed a lawsuit against Wizards of the Coast who currently own the Dungeons & Dragons license.

The claim came with the revelation that the duo were contracted to develop a NEW TRILOGY of books set in the Dragonlance world (Krynn) with the original characters. Fans of the series were understandably excited and disheartened, as the lawsuit claimed breach of contract, and would pretty much ensure those new novels never released.

Just a couple weeks ago, however, the authors dropped their lawsuit (and settled on terms neither side is disclosing). Today brings word that with everything settled, the new novels WILL get released (via Del Rey). The announcement comes via their representatives who mention the new series will get release dates later in 2021.

That doesn’t necessarily mean the books will release this year, but considering at least one novel, Dragons of Deceit , is apparently “finished” I’m crossing my fingers we’ll get that one sometime this Fall.

I’m SUPER excited for these. Dragonlance were the first novels that captured my attention in the high-Fantasy genre and recently, I’ve found myself re-reading those original books (half-way through the second) and having a great time. I can’t wait to dive back in for new adventures with some of my favorite characters.