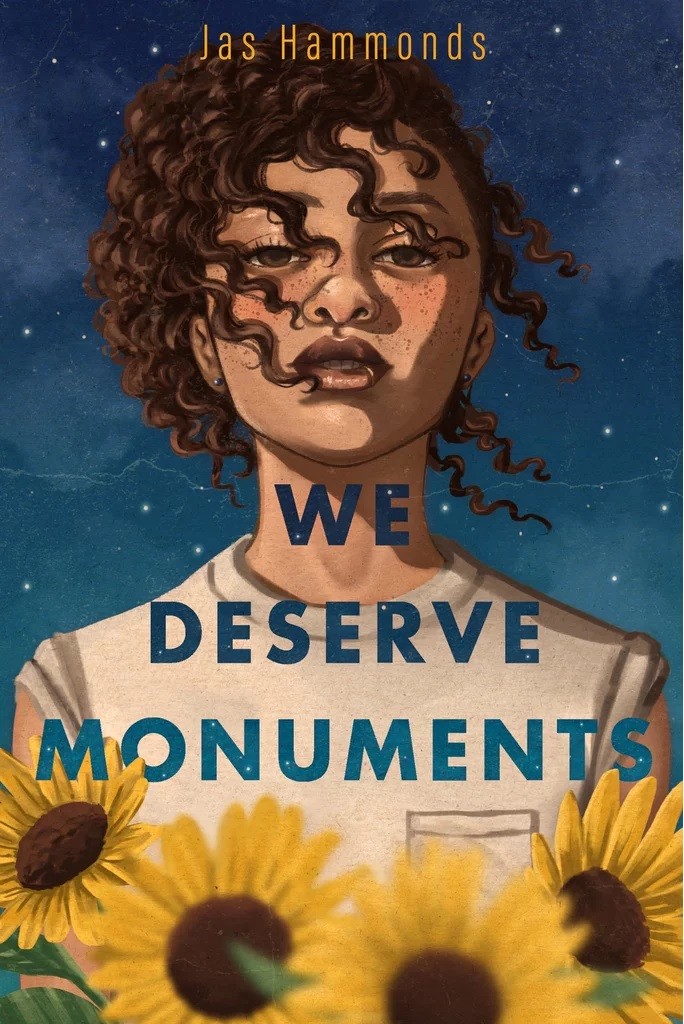 Family secrets, a swoon-worthy romance, and a slow-burn mystery collide in We Deserve Monuments, a YA debut from Jas Hammonds that explores how racial violence can ripple down through generations.

What’s more important: Knowing the truth or keeping the peace?

Seventeen-year-old Avery Anderson is convinced her senior year is ruined when she’s uprooted from her life in DC and forced into the hostile home of her terminally ill grandmother, Mama Letty. The tension between Avery’s mom and Mama Letty makes for a frosty arrival and unearths past drama they refuse to talk about. Every time Avery tries to look deeper, she’s turned away, leaving her desperate to learn the secrets that split her family in two.

As the three girls grow closer—Avery and Simone’s friendship blossoming into romance—the sharp-edged opinions of their small southern town begin to hint at something insidious underneath. The racist history of Bardell, Georgia is rooted in Avery’s family in ways she can’t even imagine. With Mama Letty’s health dwindling every day, Avery must decide if digging for the truth is worth toppling the delicate relationships she’s built in Bardell—or if some things are better left buried.

I feel like we’re being asked a couple of key questions here in We Deserve Monuments, the debut novel from Jas Hammonds. One, is the price of racial solidarity in a community forever tainted with a dark past, bad relationships and violence? And two, what are the irreversible effects a legacy of trauma has on future generations of Black Americans? Austere propositions to be sure, but not to worry, the dreariness is leavened out with what the intro calls a, “swoon-worthy romance” and a coming-of-age tale about that magical time in our lives before we reach adulthood. And magic is definitely in the air here in this great debut from Jas that not only attempts to answer those questions but offers up an intriguing and often times unfiltered look at things some would prefer to stay in the past.

There’s an interesting approach Jas takes here in We Deserve Monuments that I would love to talk about, but I can’t because it would spoil the book’s ending. Not directly mind you, but it would clearly show the path you need to be on, figuring it out well in advance of the final chapter, so best leave well enough alone. However, that inability to discuss what the most important device here is, will definitely limit my review word count which you may or may not know, tends to run long. Nevertheless, there’s plenty more to discuss so let’s get to it!

So yes, as the summary gets at, it’s a fish-out-of-water type of situation as the city-dwelling Avery has to spend her senior year in mostly unfamiliar territory, Bardell, Georgia. I say mostly because she’s been there before, but it’s been many years and she doesn’t remember much. What little she does remember, while indeterminate, did leave an impression as it was marked by anger and frustration, as the relationship between her mother, and her mother’s mother, is on shaky ground to say the least, not that anyone wants to talk about it. This book has more than a few layers; this is just one of them, Avery adjusting to Southern living. Family strife, murder, romance, it’s got something for just about everyone and that’s certainly an impressive feat, this display of control here from Jas, who lets the story bend on occasion, but never allows it to break.

The murder/mystery aspect of the story has to do with two murders; one that shook the community but remains unsolved, the other, inconsequential to most others, but one that bears the scars of a past Bardell, wounds that have never fully healed. The relevant parties in both cases are Mama Letty and the richest (whitest) family in town, the Oliver’s. The Venn diagram here in a town this old and this small can’t be ignored, and Avery is dropped smack dab in the middle, being Letty’s granddaughter, and now befriending Jade Oliver. And as her relationship with Mama Letty begins to bear fruit, and certain truths come to light about Jade’s family, Avery finds herself in the unfortunate position of suspecting the Oliver’s of evil deeds; the downside of course is eventually she might be proven right, a disappointment either way.

Aside from the true enemy, the false belief that racial differences produce an inherent superiority of a particular race, the physical manifestation of an antagonist is the Oliver’s, who, well, let’s just say they are probably proponents of the Lost Cause pseudohistorical garbage take on the Civil War. They, and pretty much all white families like them, are examples of why some Southern states have that warranted combination of deep-rooted racialist history and biogeochemistry, reactions that govern the composition of the natural environment. Meaning any racism is inherent, imbedded in the very earth and structures that surround them. Like Ghost Streams, these old towns in the South bear the scars of the past, and even though buildings don’t have feelings, they don’t have memories, but they are reminders, physical representations of history. They portray, they bear witness.

Unsurprising given the title of the book, Jas leans into this idea quite effectively, that these landmarks have seen their fair share, life unfolding in front of them in different ways, despicable things, occasional acts of courage, moments of love and grace. It is true that the longer you live somewhere, the more you become part of that place, and for Mama Letty and those that have been around Bardell long enough, every street corner has a ghost monument, a link to the past, to memories, and not all of them good.

The three generations of women, Mama Letty, Zora, and Avery provides the connective tissue here as their relationship with one another is the driver of so much that happens in the book. Since you can’t have one without the other, both figuratively and literally, their character back-and-forth is vital to say the least. One of the ways these generations connect, find one another, is through a watering hole called the Renaissance. It’s an etched in stone type of place where for decades, Bardell’s scoundrels, vagabonds, and outcasts are able to express their truest selves free from judgement and prejudices. It’s a place Zora and a friend used to visit when she was young, and now, Avery and Simone have their own “greatest night ever” experience there. It’s really just an insert, an exposition dumping ground, but Jas uses it to inject a bit of magic, sprinkle a little fairy dust on a mostly dire affair. For those patrons, it’s a temporary reprieve from a sometimes-ugly world, a gift until the sun comes up, and reality sets back in. As someone who likes off-the-beaten-path watering holes with a little dirt on the floor, and good music, the Renaissance is my type of place.

Yes, Mama Letty is a force to be reckoned with and there’s a countdown of sorts hanging over the events of the book, with her death all but assured. It’s mostly implied though, this knock-on death’s door, which could be at any moment, although there’s no dramatic change in her health strong enough to suggest any real urgency. This waiting to die scenario does manufacture a wonderful type of forced proximity, separated by years of harbored anger and resentment; this persistent rumination of perceived (and real) grievances brings my favorite character in the book, Zora Anderson, home.

Zora supersedes convention, it’s what she does. Whether it’s the relationships she keeps, both past and present, or the career she chose, her decisions have always been in the minority statistically speaking. For example, Black women still only make up about half of the 11% of total Black Americans working in STEM positions.[1] And as far as marriage goes (she married a white dude), roughly 12% of Black women intermarry.[2] Yes, I know statistics and figures, blah, blah, blah. But it’s important you understand the chemical makeup of Zora, the decisions she makes reflect the years spent under her mother’s roof, of cause and effect. And this carries over into her parenting of Avery, a young bi-racial queer person who may not stand out in a more liberal-minded metropolis hive but does in more conservative rural neck-of-the-woods type places like Bardell.

Oh, and a quick shout-out to Sam, Avery’s dad, a much more understated but always calming presence, his jazz career influencing his demeanor I’d imagine. We are so much a product of our nurturing, and certainly Jas’s quality as a person extends to him. Even with less to do overall, you get a real sense of what he’s all about, not interested in the idolized version of American beauty, but simple adoration of highly intelligent, capable women. His “hippie” approach to parenting of course flies opposite to Zora, who’s more rigid scientific-minded approach to all things has influenced her mothering as well. It’s a wonderful example of a marriage, inter-racial or otherwise.

As far as debuts go, We Deserve Monuments is a pretty good one. It’s fairy-telling is matched blow-for-blow with its historical relevance, providing a strong back-and-forth between a slice-of-life tryst, and an allegorical bit of reckoning.

It’s not quite an epigenetics lecture, but we see how adverse experiences from the Segregation Era, how the legacy of trauma, is not only both nefarious and effective, but it’s chronic. Sure, the effects may lesson over time, and perhaps manifest themselves differently, but they become a part of who we are, it’s in the water we drink, it’s in the ground we walk on, it’s in the very air we breathe. They say history isn’t about the past, but about the present, and it is true in America where the sins of the past, will echo for generations to come.

I also appreciated how unfussy the writing was as Jas skips the histrionics, making both the characters and the settings extremely palpable, but which also makes the pacing a tempered one. Blame it on the Southern heat if you’d like, but this methodical approach allows you soak it all in, making this a wholly and completely wonderful reading experience. Yes, with a great cover, a banger of a title, We Deserve Monuments is one of this year’s best.

To order a copy of We Deserve Monuments, click HERE!

Jas Hammonds (they/she) was raised in many cities and in-between the pages of many books. They have received support for their writing from Lambda Literary, Baldwin for the Arts, the Highlights Foundation and more. They are also a grateful recipient of a MacDowell James Baldwin Fellowship. Her debut novel, We Deserve Monuments, is forthcoming November 29, 2022 from Roaring Brook Press/Macmillan. 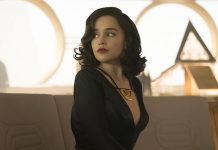