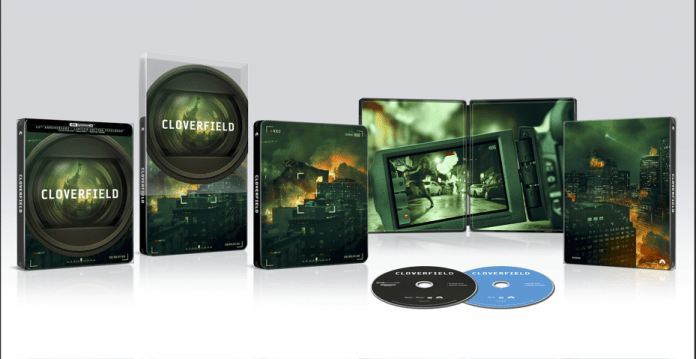 Fans of Cloverfield will soon have a special steelbook to celebrate the film’s upcoming anniversary.

Produced by J.J. Abrams and directed by Matt Reeves (The Batman), CLOVERFIELD debuted in the U.S. on January 18, 2008 and became a smash hit, ultimately earning more than $172 million worldwide on a $25 million budget. The film thrilled critics and audiences alike with its shocking, first-person video account of a horrifying attack on Manhattan by an unknown—and seemingly unstoppable—force.

Filled with action and spectacle, Cloverfield offers an eye-popping experience on 4K Ultra HD. The collectible, Limited-Edition 4K Ultra HD SteelBook includes new artwork reviewed and approved by both Abrams and Reeves, the film on both 4K Ultra HD Disc and Blu-ray™, access to a Digital copy of the film, as well as a wealth of legacy bonus content on Blu-ray, including alternate endings, deleted scenes, director commentary, and much more:

Will you be picking up the Cloverfield steelbook on January 17?