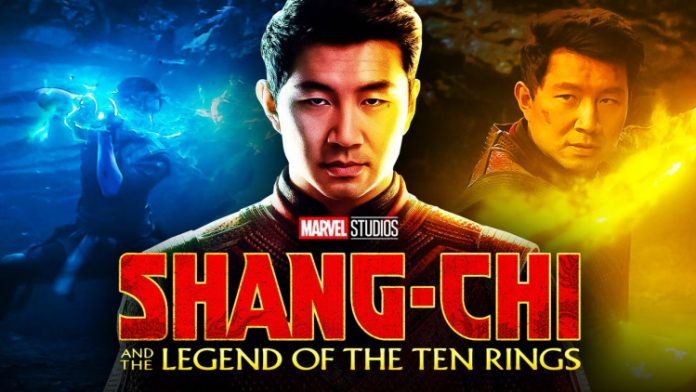 This review covers the 4K digital version of the film available from digital platforms including Movies Anywhere, VUDU, and ITunes.

Shaun (Simu Liu), a San Francisco parking valet, is forced to confront his past as the heir apparent to the Ten Rings, a criminal organization led by his father, known to the world as The Mandarin. Also stars Awkwafina, Meng’er Zhang, Ben Kingsley, Michelle Yeoh and Tony Leung. Directed by Destin Daniel Cretton.

As one of the first entries in Phase 4 of the Marvel Cinematic Universe, Shang-Chi had an uphill battle to fight. The character had very little name recognition, even among Marvel Comics fans. It’s also a martial arts film (with some mystical undertones), which might seem like an odd fit for the MCU. It didn’t have a lot of starpower to pull audiences in, although fans of Asian cinema were drawn to the casting of Tony Leung and Michelle Yeoh.

Shang-Chi, however, works surprisingly well as a Marvel film, and it was a rare pandemic hit despite not having a built-in fanbase. Based on the “Master of Kung Fu” comic that ran in the 70s and 80s, the film follows Shaun, who is trying to live a normal life away from his father Xu Wenwu (Leung), leader of the infamous Ten Rings organization. Inevitably, Shaun and his friend Katy (Awkwafina) are pulled into the criminal underworld where his father and estranged sister Xialing (Zhang) thrive.

Wenwu has a plan to bring back the love of his life, Shaun’s mother, who died many years ago. It involves his use of the Ten Rings, an ancient weapon that allowed Wenwu to rise to power and live an extraordinary long life. Wenwu needs to find the hidden mystical village of Ta Lo, and when Shaun learns his father will inadvertently unleash the destruction of mankind if he finds the village, he sets out to stop him.

The film does follow the Marvel movie formula pretty closely, as the tone, humor, visual style, and pacing will feel all too familiar. While the structure of the film is similar to other Marvel films, it’s fleshed out with an interesting origin story and a Crouching Tiger, Hidden Dragon vibe. Director Destin Daniel Cretton’s deft approach and the appeal of Simu Liu, who is fantastic in the lead role of Shang-Chi/Shaun, breathes fresh life into the comic book movie genre that has struggled to offer any originality recently.

Fans of the Nextflix series “Kim’s Convenience” are familiar with Liu already, and he exudes leading-man charm as Shang-Chi, even when the film’s dialogue is a bit on-the-nose in driving home its points. The supporting cast is excellent, although I was a bit disappointed that Asian cinema legend Tony Leung (in his first Hollywood film) doesn’t get a role with the necessary emotional depth to truly be a tragic villain. As a man obsessed with power, yet riddled with regret over the loss of his true love, the script fails to give Leung the material to be a memorable Marvel foe.

Awkwafina is great in the “fun sidekick” role, but she’s often upstaged by Ben Kingsley, who steals every scene he’s in. Michelle Yeoh is a great actress, but like Leung, she doesn’t have much to work with here, which is disappointing.

The action sequences are well done, and although the CGI is a bit overdone at times, the choreography is fantastic. The fights carry an intensity and urgency that feels far more authentic than most Marvel films.

Shang-Chi is a pleasant surprise and a freshly entertaining turn for the MCU. Although there are some cameos to tie it all in to the rest of the Marvel franchise, this film plays like a self-contained adventure that isn’t preoccupied with universe building or sequel teasing. Maybe that’s why it’s so much fun to watch, and Marvel Studios should take notice.

This review is of the 4K Digital version of the film available through streaming providers including Movies Anywhere, VUDU, and iTunes. It should be noted that the digital version of the film does not include the IMAX-enhanced scenes available exclusively on the Disney+ streaming service, which presents some scenes in the 1.90:1 IMAX aspect ratio. This adds more to the top and bottom of the image not seen in the 2.35:1 aspect ratio, and will fill more of the screen of your widescreen TV. The difference in aspect ratios is pretty significant, but whether it truly effects the viewing experience is debatable. If you have a big screen, both aspect ratios look fine, and the image composition isn’t all that different.

The true difference maker with the viewing experience is in the video and audio quality of a digital 4K film versus a physical 4K disc. Let’s state the obvious right off of the bat: a 4K disc will provide the best technical viewing experience, and if you can, I recommend buying Shang-Chi on 4K disc. However, a digital presentation of a film in 4K (with a solid transfer) can look very good if you have a great internet connection and good equipment, so buying a digital movie is a solid option if you don’t want discs.

In the case of Shang-Chi, the 4K digital video transfer looks fantastic. Despite the video compression and audio limitations inherent in streaming, the film’s Dolby Vision transfer sports razor-sharp detail and bold colors. I was surprised overall with the quality, although I found black levels in darker scenes lacked definition, with blacks and greys often running together and some slight artifacting.

In comparison, I found the digital transfer looked better than the streaming version now available on Disney+. The digital version seemed a bit sharper and sported deeper, richer colors than the Disney+ version. It appears the Disney+ servers compressed the video stream a bit more, resulting in a dimmer picture overall.

While the video transfer looks great, the audio is a bit of a letdown. Despite a Dolby Atmos mix, I found it very flat in presentation, without much range or depth, and muddled separation between the channels. Dialogue, sound effects, and the score all piled upon each other, obscuring the clarity. It’s all very underwhelming, and my sound system didn’t get the workout I was hoping for.

A handful of promotional bonus features are included with both the digital and physical 4K releases, and aren’t available through Disney+. The audio commentary by director Destin Daniel Cretton is the best of the lot.

The bonus features include:

*“The Costumes of Shang-Chi” featurette. Costume designer Kym Barrett discusses the incredible attention to detail and authenticity brought to the film’s costumes. This featurette is exclusive to Movies Anywhere. Running Time: 1:31

*“Building a Legacy” featurette. This fascinating look behind the scenes explores the history of the comic book character, and how it was updated as part of the Marvel Cinematic Universe. The filming of the movie’s key action scenes is also explored. You’ll be surprised to see that the “bus fight” scene was shot completely on a digital stage, while the Ta Lo village featured in the third act was a complete, physical set. Running Time: 8:53

*Gag Reel. As you might expect, Awkwafina is the best part of this short selection of bloopers. Running Time: 2:10

*Deleted Scenes. Eleven deleted scenes are included: “They’re Waiting” – Shang-Chi and Katy connect with Xialing over a call (41 seconds); “Take a Shot” – Katy has a moment of resolve during a battle (1:07); “Apology” – Years after his sudden absence, Shang-Chi tries to apologize to Xialing (1:36); “I’m Here” – Shang-Chi and Katy have a conversation in the alley. Katy reassures Shang-Chi that she will always be his support system (1:13); “Pep Talk” – In order to turn the tide, Razor Fist encourages Katy during the middle of a battle (1:25); “Greatness” – Trevor and Katy bond over passions in their getaway car (:56); “Escape Tunnel” – The gang slips out through Trevor’s escape tunnel in order to secure a getaway vehicle (1:32); “Two Sons” – Xu Wenwu compares Shang-Chi and Razor Fist during a tense dinner (:59); “Postcard” – Shang-Chi and Xu Wenwu reunite, and Shang-Chi makes it clear he disagrees with Xu Wenwu’s philosophy (1:45); “Just Friends” – Xialing asks Katy some personal questions (1:22); “Do It Yourself” – Xu Wenwu returns to his empire after the Iron Gang boss is captured (1:48).

*Audio Commentary. Director Destin Daniel Cretton and co-screenwriter Dave Callaham have a lively commentary, with both noting that this is their first commentary for a film. They discuss the many Asian films that influenced them, and pass along lots of anecdotes about the cast and crew.

SPECIAL FEATURES RATING: 3 out of 5