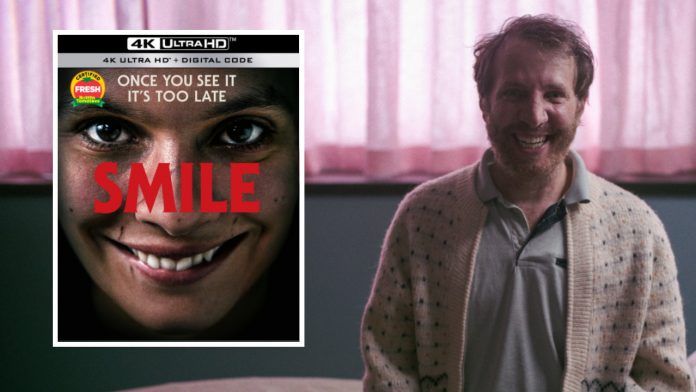 THE DELIVERY
Smile has everything you want in a horror film: a disturbing premise, unnerving imagery, and some well-earned jump scares. It’s anchored with some solid performances and considering the dark subject matter, it’s surprisingly entertaining without alienating the audience.

Based on the short film “Laura Hasn’t Slept,” which won the Special Jury Award at the 2020 SXSW Film Festival, Smile follows a psychiatrist named Rose (Sosie Bacon) who is pulled into an ongoing supernatural curse in which a malevolent, demonic entity torments her by appearing as people she knows, all smiling creepily. Rose learns that everyone who has been the target of this entity has died, and she is in a race against time to find a way to break the curse before it claims her.

The film goes to some dark places, exploring suicide, mental illness, and the effects of childhood trauma, and Sosie Bacon deserves a lot of credit for creating an emotional connection that anchors the film. She’s a fantastic actress, and the movie doesn’t work without her frantic, haunting performance. Her performance makes up for many of the film’s inconsistencies, especially when there are some convenient lapses in logic.

It seems odd that all of Rose’s family and friends so quickly turn on her when things go sideways. Not only are they dismissive and skeptical of her claims, they just accept her sudden descent into madness without much sympathy. When it appears that she killed her cat and slipped it into her nephew’s birthday gift, everyone just assumes she did it, and no one thinks it was a tragic mistake.

Only her ex-boyfriend Joel (Kyle Gallner) believes her, and uses his resources as a cop to investigate the strange occurrences. Thankfully, the film doesn’t get bogged down too much in the mystery side, choosing instead to keep the focus on the horrific visions that continue to haunt Rose as her grip on reality unravels.

The film’s tension is relentless, and one of the reasons why the movie works so well. In the behind the scenes documentary, actor Kyle Gallner accurately described the film as a “90 minute long panic attack.” Finn keeps the audience on edge by dropping some disturbing, violent imagery in the middle of otherwise mundane settings – the jump scares are well-timed and feed the story perfectly. After seeing too many horror films fill their shortcomings with cheap thrills and scares that don’t pay off, it’s nice to see a movie use the jump scare effectively.

With so many PG-13 horror films dominating the genre these days, I appreciated the fact that the film embraced its R-rated story without copping out on the disturbing content. Credit Parker Finn with finding the right balance, giving us a genuinely disturbing film that doesn’t go too dark. Smile is one of the few modern horror films that delivers on its premise, with a ending worthy of the set-up.

Paramount delivers another solid 4K transfer, although its best aspects aren’t in stunning CGI visuals, but rather in the nuance of its image detail. The film itself features a desaturated color palette, with occasional pops of reds and yellows. Skin tones remain natural despite the muted color scheme. The Dolby Vision transfer, as well as the HDR, is fantastic, and shows nice variance in the pale and neutral colors. There are a number of night scenes, with figures obscured in shadow, and the disc shows every creepy detail in some solid blacks, with no image loss, pixilation, or image crush in the blacks. The final scene is an explosion of reds and yellows, and each stands out boldly.

The Dolby Atmos highlights a seat-jumping sound mix, with the creepy soundtrack (which features a mix of industrial sounds) pouncing on you from every channel. The immersive effect here is excellent. There are no less than eight audio language tracks available – not counting the audio commentary – offering six different languages. Eight different languages are available in the subtitles.

A handful of bonus features are included, led by a solid “making-of” documentary and an excellent audio commentary. Although not plentiful, the extras do provide some quality content, particularly for fans interested in the production of the film.

The bonus features included on the disc are:

• “Something’s Wrong with Rose: Making SMILE” Documentary. The cast and crew discuss the making of the film in this excellent look behind-the-scenes. Writer/director Parker Finn explores the film’s origins as a short, and how they expanded the premise into a feature. Each of the main actors (and their characters) get some screen time here, and all of them provide some interesting interviews. There’s even a look at how practical effects were used to capture some of the film’s more demonic imagery. Running Time: 29:07

• “Flies on the Wall: Inside the Score” featurette. Composer Cristobal Tapia de Veer’s unusual score for the film featured a number of odd sounds worked into the music, and this featurette, presented without any narration or commentary (hence the “fly on the wall” reference) provides a look at how those sounds were achieved, using industrial tools and instruments. it’s an interesting – and often creepy – watch. Running Time: 8:50

• Deleted Scenes. Two deleted scenes are included: “Panic Attack” and “You’re Gonna be Okay.” The “Panic Attack” scene is quite good, and includes an especially creepy moment for Rose. Optional commentary by director Parker Finn is available with the scenes as well. Running Time: 11:40

• “Laura Hasn’t Slept” Short Film. The original 2019 short film that inspired SMILE is presented here, with an introduction by writer/director Parker Finn. It features a great performance by Caitlin Stasey, whom Finn would recast in the feature as Laura, the patient in the memorable opening scene. Running Time: 11:19

• Digital Copy. A code for a digital copy of the film, redeemable on services including VUDU and Apple iTunes, is included. Paramount digital codes are not redeemable through Movies Anywhere.

Click here to order SMILE on 4K from Amazon!