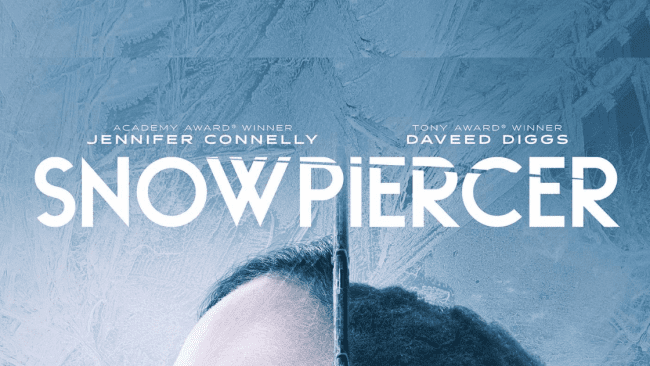 I unexpectedly received the opportunity to check out the complete first season of Snowpiercer and I’m here to let you know if it’s worth picking it up when it hits shelves in a few days’ time.

I can admit to quirking an eyebrow when I heard that a Snowpiercer TV series was coming. After all, I remembered very well that a movie had been made on the same subject (under the same title) way back in 2013. That being the case, I thought, why tell the story of an enormously long train circumnavigating the frozen Earth all over again? Then I actually sat down to watch the show, and it instantly became clear to me why they decided to retell Snowpiercer in a limited series format (the first season is only 10 episodes long). This is a story that’s far too big to be told in two hours time. By expanding into a television format, we’re getting details and a chance to fully experience the horrific dystopian world of Snowpiercer that a movie just can’t quite put together (even if it is a really good one).

That being said, is Snowpiercer: The Complete First Season worth checking out? The short answer is yes, if you like near-future dystopian stories that hit very close to home then you need to pick up this collection on day one. However, I would like to include a caveat: please be aware that Snowpiercer is a very graphic series, almost on the level of Game of Thrones in some places. There’s blood, there’s nudity, there are things that made me very uncomfortable and I would be remiss in not making you aware that they exist. If you can move past those elements, then you will enjoy Snowpiercer, for there is intrigue and twists around every corner. In fact, the first episode ends with a gigantic twist that immediately hooked me into the next episode to see what happened next.

The cast, it should be mentioned, is masterfully led by Jennifer Connelly and Daveed Diggs, playing characters on opposite sides of the class warfare that permeates the Snowpiercer train. Every time they share a scene though, the tension becomes delightfully electric. You can tell each character is playing their own game, and the number of strategies to evade the other being deployed is mind-boggling, but in the best way possible. Watching those two work together is one of my favorite things about Snowpiercer.

There’s also a decent amount of extras in the special features section as well. The bonus features include: Overview, Class Warfare, Jennifer & David Behind-the-Scenes Interview, The Train, and Behind the Curtain: Art of the Frozen World. That’s a lot of features to include about a single season of television, but it’s great to see we’re getting such a big look behind the curtain at how Snowpiercer was made. The train itself is masterfully realized in the series, even if it is hard to comprehend of a train being 1001 cars long.