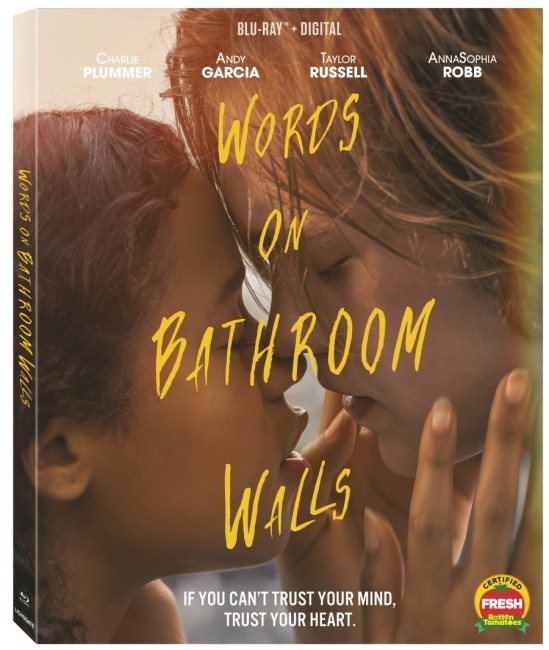 Check out our review of Words on Bathroom Walls on Blu-ray!

Adam (Charlie Plummer) is a teenager with a secret: he has schizophrenia, and he struggles to hide his illness from a girl he likes, Maya (Taylor Russell). Also stars Andy Garcia, Walton Goggins, Molly Parker, and AnnaSophia Robb. Directed by Thor Freudenthal.

Based on the young adult novel by Julia Walton, Words on Bathroom Walls takes an earnest, PG-13-friendly approach to mental illness in teens. With a strong performance by Charlie Plummer, the film avoids much of the melodrama you might expect, even if the third act is a bit formulaic.

The film tells the story of Adam (Plummer), a teenager suffering from schizophrenia. The disease manifests itself not just as voices in Adam’s head, but as distinct individuals he can see, testing his grip on reality. The “voices” are portrayed by Lobo Sebastian, AnnaSophia Robb, and Devon Bostick, and each are quite good in highlighting Adam’s plight. In addition, only Adam can see demeaning phrases plastered on his school’s bathroom walls, hence the title.

Director Thor Freudenthal, and a Nick Naveda screenplay, don’t insult the intelligence of the viewer by slathering on cheesy melodrama. He conveys the challenges of schizophrenia honestly, mostly through narration and monologues by Plummer. The visuals (as well as the ‘voices’ actors) effectively portray the impact of schizophrenia in a way the viewer can understand and sympathize with, without being emotionally manipulated.

After Adam suffers a psychotic break at school and a student is injured, he has to enroll at a Catholic school headed by Father Patrick (Andy Garcia). There, Adam meets Maya (Taylor Russell), a gifted student who mentors him when his grades start to slip. Adam tries to hide his condition from Maya, but he learns she has some secrets of her own.

Plummer’s performance here is fantastic, highlighting the realities of mental health issues while still connecting with the audience as a sympathetic character. The supporting cast is terrific as well: Andy Garcia plays a priest you’ll actually like, bringing gravitas to a role that will make you wish he had more screen time. Taylor Russell (Netflix’s Lost in Space) is effective as Adam’s new (and only) friend, and Molly Parker (Deadwood) is a standout as Adam’s long-suffering mother. Walton Goggins (Justified) also appears as Adam’s mother’s new (and unwelcome) boyfriend.

The third act features a number of teen movie tropes – drama at the school dance, a near-death experience and hospitalization, and an impromptu monologue at graduation. It may all seem a bit contrived, but the movie is good enough that it has earned a little leeway in playing out the conclusion, and Plummer’s grounded performance keeps everything on the right level.

Words on Bathroom Walls isn’t the cinematic revelation you would hope it to be, but it does a laudable job of presenting an accessible human drama on a difficult subject. The content is suitable for the teenage audience it’s aiming for, and parents will enjoy it as well.

The film was shot digitally, and the Blu-ray transfer exhibits a consistently strong bitrate and excellent detail. Colors run a bit warm, but not overly so. Yellows are strong, and reds tend to pop on an otherwise natural palette. Skin tones are a bit bright, blacks are inky, and shadows show nice depth and detail. Visual effects mesh well in the high-definition image.

The 5.1 DTS HDMA soundtrack shows nice range and clarity, and shows some occasional creativity. When the voice inside Adam’s head speaks, it resonates throughout the channels with rumbling low-end, utilizing the mix for a nice dramatic effect. Music is presented with good balance.

There’s not much in the way of bonus features. No behind-the-scenes featurettes or even a director’s commentary. With a film aimed at teenagers, not providing them more information about schizophrenia (even in some sort of PSA) is a missed opportunity.

Special Features on the disc include:

Image Gallery. Eight images, including the film’s poster, are featured in this short video. You’ll have to pause the video to see an image for more than a few seconds. Running Time: 35 seconds

Digital Copy. A code for a digital copy of the film is included. Lionsgate codes are not redeemable through Movies Anywhere.

Click here to order Words on Bathroom Walls on Blu-ray from Amazon!