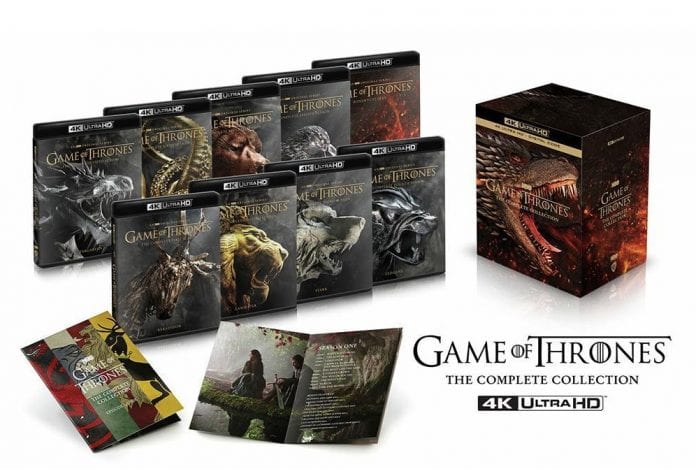 Relive the battle for the Iron Throne as the complete series of HBO’s Game of Thrones comes to 4K Ultra HD in one glorious box set. Though it doesn’t bring any new special features to the table, the release is definitely worth picking up.

It feels like a lifetime ago, but crazy to think Game of Thrones came to an end just last year. While fans still seem divided over the show’s ending, there’s no denying the impact the series had over the years. Not just in terms of storytelling, but production value and the potential for a big budget genre for prestige TV.

I’m not going to recap/review each season of the show for this. That’s just too much ground to cover and WAY too many cans of worms I’m not gonna get into. Suffice it to say, it’s one of the first major drama TV shows that has hooked me so completely. I’ve never been big on scripted series (that weren’t cartoons) and mostly stick to docu-series and the like.

Though I came into Game of Thrones a couple seasons after it started, I remember becoming obsessed. I binged the first three seasons within just a couple days and I found myself among the throngs of other fans eagerly picking about clues and analyzing where things could go next. As the future seasons played out, I voraciously followed them like no other show before. Hell, it even prompted me to finally dive into the novels, which became another obsession!

There are plenty of problematic elements that could (should) have been smoothed out, but the story and characters continue to engage us on a deep level. One that still feels rarely captured by other shows (even some of its own latter seasons).

As such, I was very excited to check out the complete series on 4K. While I wasn’t able to get in a FULL rewatch of the series, I tested out a couple episodes on each disc included in the set to ensure the visual and audio quality was the same throughout. Though I will say that the few episodes I watched have me itching to dive back into Westeros in full.

While the show has received an almost ridiculous amount of media releases over the years, including a handful of “the series so far” boxsets, this is the first time every season has been given the 4K treatment. Previously, only the first and final season had seen a UHD release, so this is definitely the biggest appeal of the new release.

My goodness…the 4K transfer is absolutely gorgeous. The image is crisp and clear, bringing out subtle details (even ornate costume design stitching I’d never noticed before) in stunning quality. The blacks are super deep, allowing us to make out the darker/nighttime sequences with a clarity we haven’t gotten before.

The audio is given a similar boost and makes great use of the surround sound to immerse you in the world they’ve created. All in all, the technical aspects take the show to another level and makes it feel like I was watching it for the first time.

While the bonus features don’t bring anything new to the table, there are still 15 hours worth of featurettes that take you deep into the making of the series. They’re from previous Blu-ray releases and included on a separate disc-case within the set. Even having been included in previous season releases, having them all lumped together still makes for an impressive amount of special material for fans to enjoy.

Here’s the thing, even if you’ve already picked up previous Blu-ray releases of the various seasons, the 4K Complete Series is still worth snagging. The transfer quality is top tier and will make your re-watches a blast. From details you may have never noticed before, to making the epic action even more impressive, everything shines brightly in this release.

Definitely pick this one up, or mark it down for the Christmas list. Fans will be more than happy to see it under the tree this year.

Game of Thrones The Complete Series in 4K is available on November 3rd.