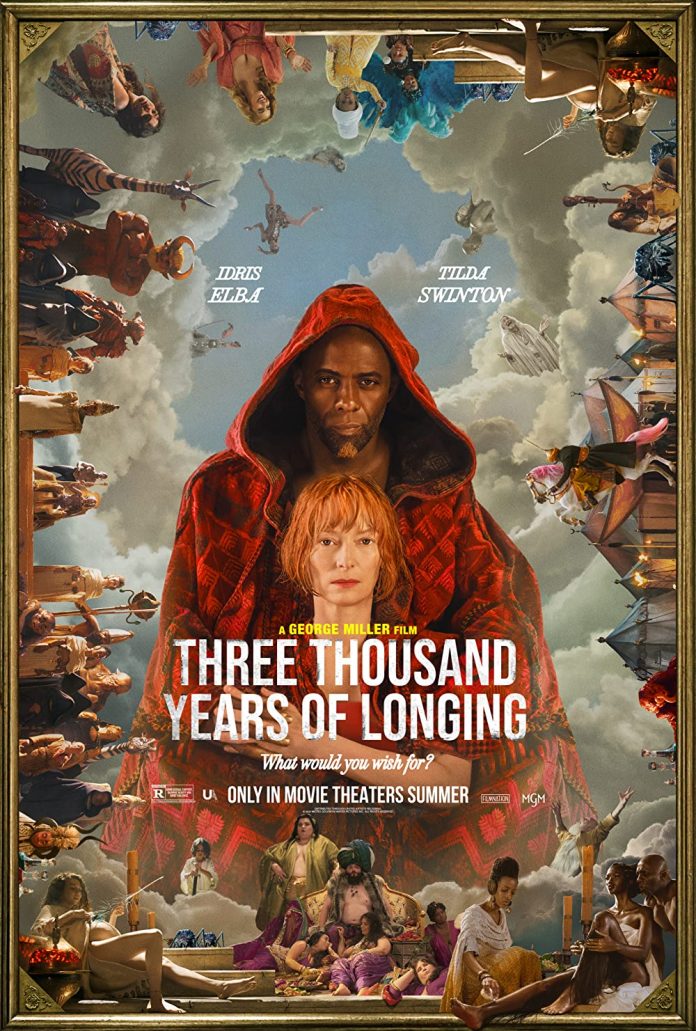 The narrative, or way a plot of a film is conveyed can be almost as important as the film’s plot itself. So often are feature films told through the perspective of a main character, allowing the audience to experience the events firsthand. This can give the story a more exciting and genuine-feeling presentation, and allows better engagement. Alternatively, films can be told through narration. Narration allows additional comments and context without needing the additional screen time to depict it. In other words, it can be more streamlined while also providing additional depth – but at the expense of audience involvement.

Three Thousand Years of Longing is an interesting film because it tells its story through a combination of both of these common techniques, often at the same time. The film has a main character through which the audience’s perspective is channeled, but the bulk of the film’s story is told via flashbacks through the narrative of another character. This allows the audience to experience the shock and awe of the film’s story first hand, but also provides additional context from the character who experienced those events.

Spoken narrative can also be somewhat of a letdown in the realm of feature film because no matter how exciting the story is that is being told, it is still just a character talking. Film is a visual media, and using it to convey a story through audio only can leave it feeling like a wasted opportunity. Thankfully, Three Thousand Years of Longing chooses to depict the passages of spoken narrative, providing the audience with an awe-inspiring journey filled with rich and colorful visuals. Seeing these stories come to life gives the sense of experiencing them first hand, even if they are being told retroactively, because we are hearing them through the perspective of the film’s main character.

Alithea Binnie (Tilda Swinton) is a solitary literary expert who studies the fiction of ancient cultures. While on a business trip in Istanbul, she purchases a glass bottle which she later learns contains a Djinn. The Djinn (Idris Elba) will grant her three wishes, but Alithea, from her knowledge of djinns in the stories she studies, believes she is being tricked. To prove otherwise, the Djinn tells her his past, including how he ended up being trapped in his bottle because of how others have used the wishes that he granted them. Through these stories, Alithea begins to see how the Djinn has been at the mercy of the pleasures and pitfalls of interesting people throughout history, and wants to experience the romanticism of his adventures for herself. This inspires Alithea to make her wishes, but in the process she comes to realize the inescapable truths about desire.

Having Alithea be a scholar in the field of literature allows the film to play off of her expectations. As the Djinn tells his stories, Alithea is confident in herself and believes she knows what will happen and why it will happen, but is often proven wrong. She believes she is completely satisfied, and would not be able to make any of her wishes. The Djinn has to convince her otherwise, or else he will be trapped forever. This instills a sense of arrogance within Alithea which has to be broken down, and is part of the film’s criticism of how modern society treats tradition and lore, even by those who claim to be so heavily committed to it.

In this manner, the film is defiant, which is perhaps its best attribute. George Miller delivers a film that is consistent with his prior work by harnessing his impressive imagination. However, he counters expectations by doing so in a way that attempts to diverge from traditional escapist experiences. The adventures of Three Thousand Years of Longing serve as introspective to romantic philosophies, rather than revving up thrills to elicit audience cheers. By adhering to his central vision without compromise, Miller is able to defy expectations and genre classifications to create a very unique and philosophical film.

The end result is a film that feels like a fairy tale, but for adults. It wants to prove that there is still value and knowledge to be gained from our past and it shouldn’t just be cast aside for the sake of technological progress. However, within the realm of contemporary cinema, Three Thousand Years of Longing still feels somewhat old fashioned. Despite the way the film acts out against the trend of transforming elements of culture for mass consumption, it does rely on slick emotionless CGI to bring its vision of the past to life and attract the audience’s attention. Despite its attempts to amaze us with innovating characters and exotic settings, it can’t help but utilize over-played clichés in the process.

And as much as I think the decision to frame the film as a story within a story was correct for the material, it does have some drawbacks. Like Disney’s Eternals, the film struggles to find narrative consistency when it has to cover an epic story that takes place over many many years. The Djinn’s story stops and starts, picking up the threads of the story as it progresses through time. The audience becomes engaged in one story only to have it end and another begin. Furthermore, the captivation created by those stories with their rich visuals and interesting characters makes the main storyline, the conversation between Alithea and the Djinn, feel pedestrian and less important by comparison.

What we end up with is a film with elements of attention-grabbing awe like a classic epic adventure, but that type of expansiveness contained within the meditative thoughtfulness of a inquisitive romantic drama. The result almost feels like a compromise which has the right pieces but can’t quite get them to fit together. As a result the film has to cut corners and leave some of its more intriguing explorations unresolved. For example, at the beginning of the film Alithea keeps having visions in which she can see other Djinns. This alludes to a deeper connection with the Djinn, but isn’t ever fully flushed out later on. Likewise, the film shows us glimpses of Alithea’s past, but doesn’t fully explore them in a way that adds much to the story.

It also doesn’t help that the film’s actors don’t really have much chemistry. Idris Elba and Tilda Swinton are fine in their roles, but together they can’t quite pull the right strings to make the central narrative work as well as it should. With so much of the story focused on the Djinn’s past, the story doesn’t have any other characters who last more than a sequence. This places a large narrative weight on the two central characters which would be difficult shoes to fill for even the most compatible pair of actors. Factor in the lopsided focus on the Djinn and uneven pacing in the film’s last third, and you have an end product which doesn’t turn out as interesting as it could have been.