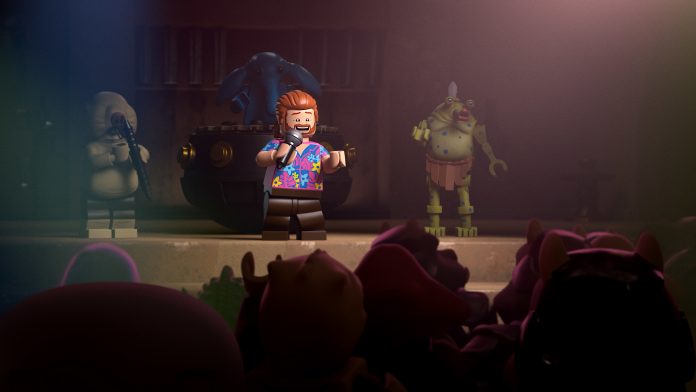 One of the most pleasant surprises over the past few years in Star Wars sequel content, have been the LEGO animated specials. Both The Holiday Special and Terrifying Tales were just an insane amount of fun, and despite being “canon-adjacent” gave fans a look at what our newest heroes have been up to since the end of The Rise of Skywalker.

Here’s the thing, if you weren’t on board with the last two LEGO specials, I doubt Summer Vacation will change your mind. By and large it retains the same storytelling style, and humor we’ve come to associate with these LEGO shows. It doesn’t break the mold already established. The flip side of this is if you loved the previous ones, you’ll absolutely have a blast with Summer Vacation.

Following the pattern of the previous specials, where Rey and Poe got the focus respectively, this time around the focus of the story is on Finn. As the heroes prepare to go their separate ways in a galaxy pulling them different directions, Finn plans a “final” vacation aboard the luxury liner, Halcyon Legacy.

Unfortunately, things don’t go the way he wants, and he finds himself alone and disconsolate. To help him in his time of need, three Force-ghosts appear to tell him stories of their pasts to teach a lesson. Obi-Wan Kenobi appears to tell an untold story of him cutting loose on Tatooine. Anakin Skywalker recounts a story of a time where he tried to get the Emperor to have some fun, while General Leia Organa shares a touching story of a family vacation with a young Ben Solo.

Each short plays out in its own fun way, offering themes that are important not only to the characters in them, but the younger audiences watching. I’m not going to go into detail on each story being told (I mean it’s only 45 minutes, there’s no need to spoil things), but suffice it to say they have their own charm that comes together to help Finn along the way.

In this way, it’s more akin to Terrifying Tales. The Holiday Special tied things together into a singular story, where Tales and Vacation take this anthology approach. Either way, the result is a whole lot of irreverent fun that perfectly incorporates the LEGO humor and deep Star Wars lore.

On top of the stories being funny and featuring some catchy songs (seriously), what impressed me most was the depth of emotion it managed to hit on. The story itself hits on the idea this might be their “final” time together, and as things unfold, it hammers home the journey our heroes have been on in some really heartfelt ways. By the final few minutes, I found myself legitimately choked up and thinking on all the great things the Star Wars saga has given us over the years.

Summer Vacation was touching in a way I certainly wasn’t expecting, while still fitting nicely within their established themes and humor. I was impressed. While I’ve always enjoyed the overall themes of these LEGO specials, something about Summer Vacation managed to take them to a deeper level that hit just the right spot for me. It doesn’t lose any of the fun, but somehow hits an endcap on the live-action franchise in a satisfying way.

Again, if the LEGO Star Wars specials haven’t been your thing, Summer Vacation isn’t going to change any minds. That said, I think it’s still worth a shot, if only because it’s nice to get new stories featuring the Sequel Trilogy characters. If you’ve enjoyed the previous outings, then you’ll definitely have fun with this one.