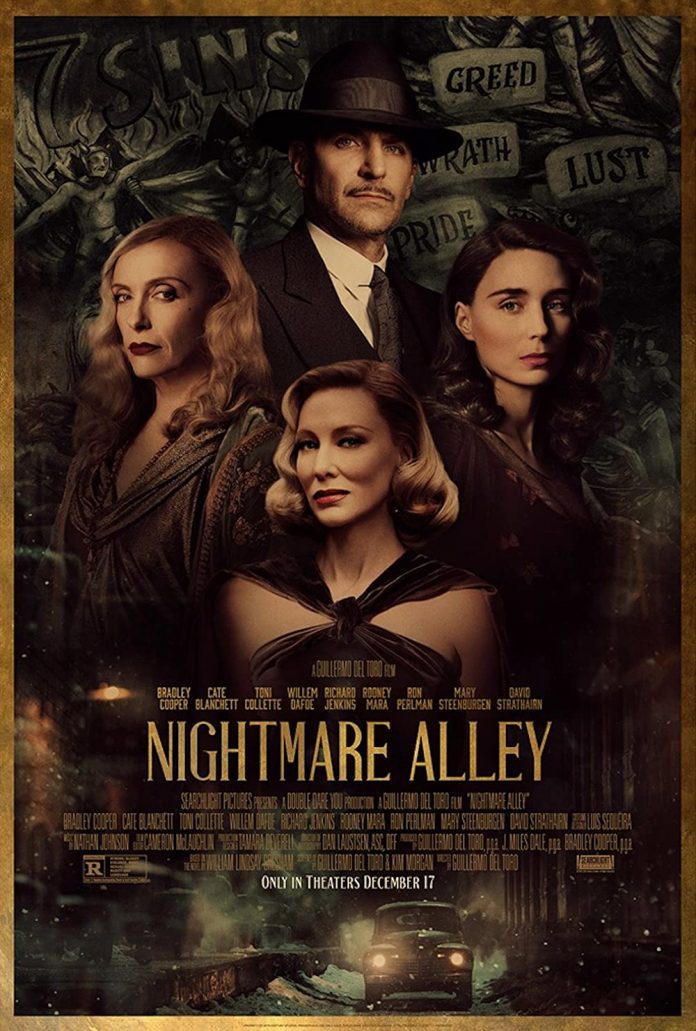 Director Gullermo del Toro’s previous film won the Oscar for best picture. While Nightmare Alley isn’t at the same level, it still exudes all of the qualities we have come to love about the films of the famed Mexican film director.

The Shape of Water was Guillermo del Toro’s love letter to 50’s creature feature science fiction. In many ways it was the best representation yet of del Toro’s approach to film and what makes him a fascinatingly unique director. Instead of posing the weird and supernatural as a shock factor to frighten his audiences, he embraces it as something untraditionally beautiful. Nightmare Alley is del Toro’s newest film and follows a similar approach, but towards battered and bruised 40’s noirs.

A title like Nightmare Alley brings up all sorts of connotations of weird and wicked. But while it does provide some of that type of material, it doesn’t really approach ‘the unusual’ in the same loving way del Toro has in the past. One reason is because del Toro isn’t making an original movie here, but a remake of a 1947 film. As a result, he is somewhat restricted by the direction of the plot as it already exists, and can’t really explore the frightening world as much as he would probably have liked. Another reason is the fact that the film’s plot has a very large amount of material to cover. This leaves precious little time to relax and “take in the scenery”.

Which is a shame because Nightmare Alley has all of the pieces in the right places to maximize del Toro’s creative eye. The story follows the life of Stan (portrayed by Bradley Cooper), a man running from a frightening past. He becomes a carny, eventually learning the truths behind some of the various performances at the show – most importantly the role of a clairvoyant.

Stan eventually falls in love with a young woman, Molly (Rooney Mara) and together they decide to leave the circus and perform on their own. Years later they have become successful psychic performers, and Stan is confronted by a psychologist (Dr. Ritter, played by Cate Blanchette). Ritter and Stan team up with Ritter providing Stan access and information on high-level clients. But eventually Stan’s success gets the better of him when he becomes involved with a dangerous crime lord.

When we first meet Stan, he’s lost in the world. He skitters around the carnival like a mouse hunting for scraps – sweet but cast aside. The film alludes to a frightening past in which he is abused by his father, but doesn’t really elaborate. By the time he is performing on his own he has transformed into a strutting bull. He eschews the guidance of others and snaps back at anyone who questions his dominance. The transformation is jarring, but speaks to the impact of sudden success when you’re used to struggling. It’s the old-time theme of never forgetting where you came from.

That juxtaposition – between Stan’s life as a carny and his attempts at making his own way – perfectly encapsulates the experience of watching Nightmare Alley. On one hand there’s an old-fashioned sense of nostalgia. It really does feel like a noir modernized with contemporary production and a sophisticated sheen. But on the other hand there is a lack of inventive storytelling and intriguing motivation. Because the first and second part of the films are so different the themes and messaging of that first part don’t really feel very consistent in the second.

Not only does Stan feel like a completely different person than who we came to know during his time at the circus, but his inventiveness and enthusiasm is watered down into desperation and short-sightedness. The first part of the film serves only as a warning, which Stan doesn’t heed at all. So the place the film ultimately lands is not only obvious, but expected. The film offers few twists or moral dilemmas against which Stan’s sudden change in character could be cast as desperation.

The film would have been better served focusing on the second part of Stan’s adventure while using flashbacks to make connections with his time in the circus. But this is just one area where a modernization of the film’s storytelling techniques could have paid dividends. The other issue is the film’s pacing. As I mentioned above there is a lot of material to cover and only a finite amount of time to cover it.

What results is a mad dash through the story, with time moving forward hap-hazardly. Not only is the major jump between the two settings off-putting, but Stan’s development as a character does not proceed as organically as it could have. Part of this is the limitations associated with the feature film format as is, but again it just comes down to editing. I feel like del Toro loved the original film so much he couldn’t make the types of cuts that were necessary. Eventually the audience just feels like we are being strung along.

Despite these challenges the film still has a lot going for it. First and foremost is del Toro’s eye for detail. Every shot in the film is wonderfully dressed with impeccable style and craft. Even in the run down and dirty circus, there’s a lot of interesting things to look at and consider. There’s a wonderful and almost magical sequence on a run-down carousel that really speaks to del Toro’s talent of extracting beauty out of unexpected places. And just as important is the way the actors in the first half of the film give the setting a cautious but lively atmosphere.

I also appreciated the way the film contrasted the lessons of the first half of the film with those in the second. At the very least Stan comes to be a master of his domain in the circus, and that gives him the confidence to go out in the world and try his charades on a bigger stage. But the film shows us that the real world is even more dangerous than the life of a carney. Stan’s tricks work when the stakes are low, but as he pushes himself to achieve more, he fails to realize the risks are higher too.

Cate Blanchett is the standout in this film. She brings exactly what is needed to her character, giving her a crafty intelligence that bends and manipulates Stan as the plot progresses. Without her performance being believable, it would be difficult for the audience to go along with the changes we see in Stan – especially given the continuity issues I discussed above. Cooper is satisfactory in the role. My biggest complaint is one that has already been voiced, the fact that Cooper is too old for the role.

Nightmare Alley has the foundation to be an intriguing and unique film, but unfortunately it doesn’t put the pieces together in a way to be substantially compelling. The plot is interesting but the storytelling needed more discipline and the script needed more innovation. Director Guillermo del Toro struggled to balance the small details with the larger ones and what results is a film that is much too monotonous for what it was aiming for.