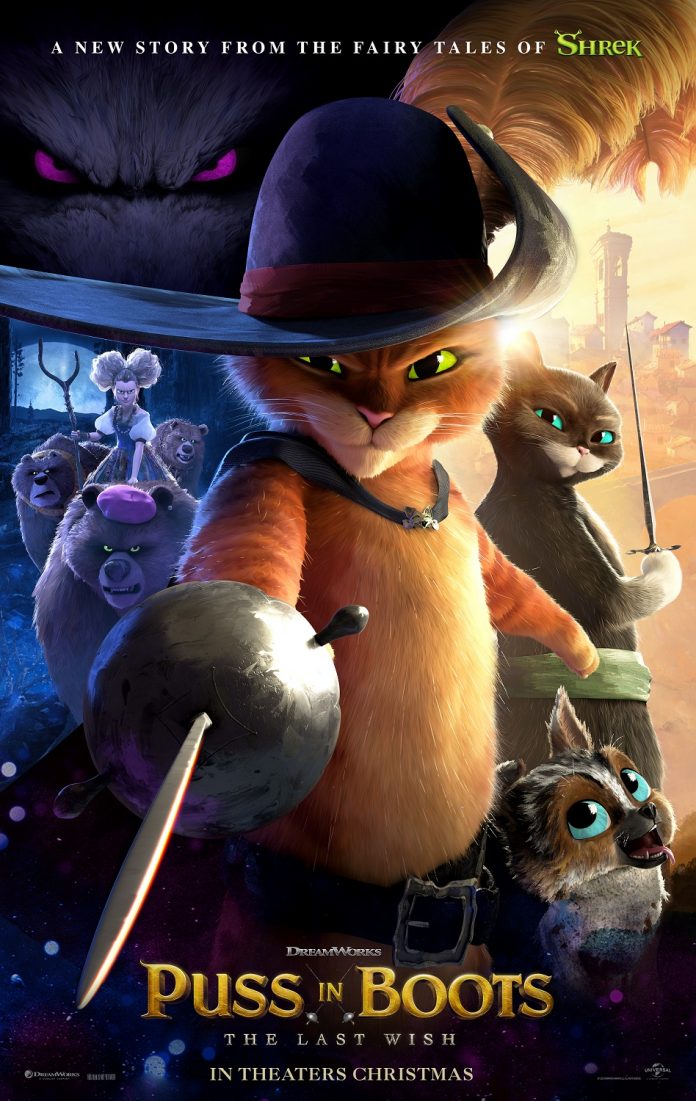 More than a decade since the first Puss in Boots film launched, The Last Wish manages to deliver a refreshing sequel that left me eager for more!

It’s been a while since audiences have visited the world of Shrek. The iconic animated franchise consisted of four main movies along with a spin-off film focused on the titular character Puss in Boots. It was, for a time, DreamWorks’ biggest franchise. Despite Puss in Boots being generally well received overall, the franchise just kinda stopped.

So here we are, 11 years later, with a brand new sequel that dives us right back into this universe. It’s understandable for many to have been skeptical. Hell, I wasn’t even that big on the first Puss in Boots movie—though I enjoyed how it tried to get different with the lore. After all this time, with a new art style, and fighting against some strange revisionist history that the Shrek films were “bad” (they were all beloved, with only the third film being an outlier)…how good could a sequel to a spin-off be?

Turns out, it’s pretty damn amazing. Seriously, I’m kind of blown away by how good The Last Wish turned out to be, and I find myself itching to dive fully back into this world.

As you’ve seen from the trailers, the story of The Last Wish puts the focus on Puss in Boots as he comes to the last of his “nine lives.” Having squandered his previous lives and fearing death, the legend hangs up his cape in order to hold on to the life he has remaining. His retirement, is not going so well as he finds the life of the mundane leaves much to be desired.

When the “crime family” of Goldilocks and the Three Bears comes looking for him, Puss in Boots learns about a map that leads to the fabled Wishing Star. It’s a chance to regain his nine lives and once more become the legendary outlaw/mercenary! Of course, Puss is far from the only one looking to have a wish granted and as he embarks on the quest finds himself partnered up with a dog with a ridiculously sunny disposition, and his old friend/lover Kitty Softpaws.

As the trio head into the fantastical dark forest to seek out the star they must out maneuver Goldi, the villainous Jack Horner, and even Death itself.

By and large, that’s pretty much it for the plot! One of the things I love most about the movie is how it maintains that laser focus on the story being told. Sure, stuff happens along the way, but it very much maintains the “chase” feel of the plot without losing focus. The result is a super tight story/script that allows for touching character moments, crazy action, and a blistering pace that makes it’s almost two hour run time feel like nothing.

I won’t dive more into the story details in order to avoid spoilers, but suffice it to say, I’m impressed. I wasn’t sure what to expect from The Last Wish, especially since Puss in Boots wasn’t exactly my cup of tea, but what I got absolutely blew me away. Not just in a “I had low expectations and it was good” way, but a “this is legitimately one of the best animated films to hit this year” way.

It manages to hit all the right notes. First of all, I am very much digging the new art style they go with. While it still lines up with the overall Shrek-world, it manages to feel fresh and allows the filmmakers to do something a bit different with the action and overall style they couldn’t have done before.

Namely, the action is pretty intense. Probably the best comparison to be made here, is that it obviously uses anime influences for the film’s many action sequences and the result is eye-popping. From the film’s opening encounter with a giant, to the impressive sword-fighting action with the Wolf, and everything in between, there’s a lot to keep you entertained. Seriously, it’s incredibly well choreographed and the new style allows it all to pop in ways like never before.

Then there’s the surprising amount of emotional depth. As the story focuses on Puss having to—at last—come to terms with his own mortality, audiences are given a greater connection to character overall. As we see him struggle with understanding the “meaning of life” and what it means to have people to share it with, it does an excellent job of growing the character in ways that go well beyond the archetype he’s fallen into over the course of the Shrek franchise.

There’s something deeply personal about the story, and how easy it is to see yourself in the same circumstances; despite the fantastical setting. There are a number of character moments sprinkled throughout the film in ways that don’t kill the pacing (even a surprising moment of self-reflection) and by the end of the film I found myself getting choked up over certain choices the characters make. If you’d told me even yesterday that a sequel to Puss in Boots would get me emotional, I would have called you a liar…and yet, here we are.

It’s just a damn good film. You have a tight script, excellent characters, great voice work, solid comedic gags, impressive action sequences, and genuinely emotional moments all wrapped up in a package that appeals to ALL ages. I can’t wait to go back and watch this with my kids to see how they react in order to see which elements stand out to them the most while I get to re-live this fun adventure.

If nothing else, it proves there’s still plenty of life left in the world of Shrek, and I find myself more eager than ever to see what comes next for this character and that world overall.