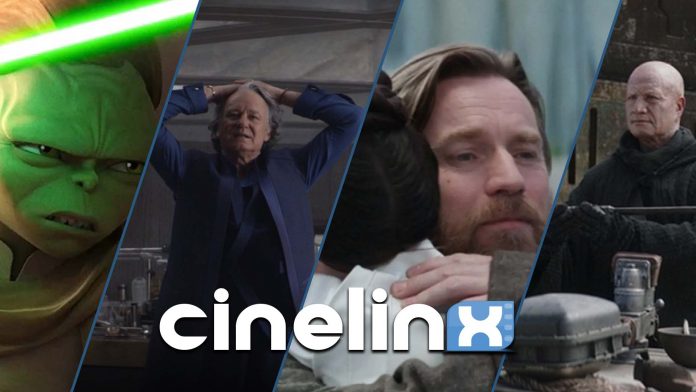 2022 was a surprisingly big year for Star Wars storytelling and today, I’m looking back at some of my favorite moments from it all.

For a franchise so many goobers want to keep insisting it’s “dead,” Star Wars had a pretty massive year in 2022. Between three live-action series, a new animated anthology, the arrival of LEGO Star Wars, the return of Star Wars Celebration (which brought news of MORE projects), and a ridiculous amount of great books/comics…it’s safe to say the franchise is alive and well as long as you’re not a big baby.

With an even bigger year on the horizon, I wanted to take a look back at some of my favorite moments in Star Wars this past year. I’m forcing myself to be limited to only five choices which had to take place within a story, and (of course) only within the material I’ve read/consumed. I know the comics had some great moments, but I’m woefully behind on them, so don’t beat me up too badly over leaving them out of this particular list.

[There will be some SPOILERS throughout this post for various shows (and even a book), so be warned!]

Let’s start with something more recent: Andor. I could have filled up an entire top ten list of moments JUST based on this series alone. Seriously, it’s that good and somehow continued to get even better as the weeks went on. There are a multitude of scenes I could choose. From Kino Loy’s “One way out” breakout speech; to the entirety of Maarva’s funeral; and even Mothma’s heartrending, “I’m in so much trouble,” scene, there’s no shortage of moments that still resonate with me.

That said, however, one specific scene continues to stand out for me, even after the impressive finale: Luthen’s speech about sacrifice. The moment comes just after the impressive prison escape sequence in Episode 10, and puts Luthen’s philosophy on full display. On top of giving Stellan Skarsgård a chance to give everyone a masterclass on acting, the monologue brings chilling clarity to the characters history, motivations, and the true cost of overthrowing fascism.

I loved the scene so much, Nerdist actually let me expound on my thoughts about what it all means!

This moment came EARLY in 2022 (literally the first week of the year) as The Book of Boba Fett episode two hit Disney+. While my thoughts on the overall show remain mixed, there are plenty of things I enjoyed about the series and will continue to look back on fondly. Chief among them is how the Tuskens were portrayed in the show.

As io9 let me rant about, the show gave the Tuskens a culture beyond being simple savages. Such things were hinted at in The Mandalorian, but brought to full light thanks to Boba’s time among them. They’re clearly coded as indigenous people and TBoBF at last made them FEEL like representation on the screen, rather than mere appropriation.

Specifically, I adore the ending scene in the second episode, as Boba is welcomed fully among the tribe and joins them in a celebration around the fire. While the imagery leans more towards the Māori Haka (thanks to Temuera Morrison’s input), it very much reminded me of my own Native Americaon pow wows. I never imagined seeing such a thing on screen in my favorite franchise and it brought me to tears.

2022 was another stellar year for Star Wars books. With the first phase of The High Republic coming to an end, some amazing lore/gap filling with both Shadow of the Sith and Brotherhood, plus an absolutely DELIGHTFUL sojourn to Han and Leia’s honeymoon. There are a number of exceptional moments from all of the novels released, but one that continues to stick with me came with The High Republic Phase II kick-off novel: Path of Deceit.

The book is impressive overall, but I genuinely gasped when Padawan Kevmo Zink met his end. Don’t get me wrong, I’m fairly used to The High Republic breaking my heart and killing off cool characters at this point, but I never suspected they’d be so bold as to kill off BOTH the main Jedi who featured so prominently in the story.

After getting over that initial shock, the true genius of the story being told came into focus. Kevmo’s death makes it clear the “main characters” of the book were never the Jedi, but instead Marda and Yana Ro. The realization shifted my whole perspective on the novel and the story being told, encouraging me to go back to earlier moments and view them in an all new light. The subtlness in which it’s handled continues to impress me even now.

Since her debut in 1999 with The Phantom Menace, Yaddle has unironically been one of my “favorite” Star Wars characters. I put the quotes there because it’s hard to call anyone a favorite when they get so little to do (though he appearances in the Legends comics were epic). Either way, as a Yaddle fan, 2022 has been a decent year!

The diminutive Jedi master has made a couple cameo appearances in The High Republic era, she was included as a playable character in LEGO Star Wars: The Skywalker Saga, and more importantly, got the spotlight in one of the Tales of the Jedi shorts. Sure, she had to share the spotlight with Count Dooku, but even in such a short amount of screen time, fans were given plenty of greatness to enjoy.

From her “detective” skills, to the empathy she shows Dooku, and even her understanding that the Jedi have lost their way…Yaddle becomes a far more complex character and is expertly brought to life by Bryce Dallas Howard. Moreso, we’re treated to seeing how badass Yaddle can be with a Lightsaber and her command of the Force. It was a fight scene on the same epic level of the movies and she deserved nothing less.

As always, my lists aren’t in any specific order. That said, if I had to choose ONE favorite Star Wars moment from the year…it’d be this one. Like the other Star Wars shows this year, Obi-Wan Kenobi has plenty of great moments to choose from, but none have stuck with me quite as much as the conversation between Kenobi and young Leia about the Force.

It’s a quiet moment that comes early in the third episode of the series, but it remains one of my all time favorite character moments from all of Star Wars. While it lacks the flash and tension of other aspects in the show, it offers us a raw look at these two iconic characters in a time in their lives we’ve never seen before.

As Leia asks Obi-Wan what the Force feels like, he engages her with a question of his own, “Have you ever been afraid of the dark?” When Leia says yes, Kenobi then asks, “How does it feel when you turn on the light?”

Leia says she feels safe, to which Kenobi replies, “Yes, it feels like that.”

More than being a (very) well acted scene, it’s a perfect encapsulation of Kenobi and his own journey with the Force. The whole series is about him coming back to terms with being a Jedi, and here we see him almost effortlessly fall back into “teacher mode” with Leia even as he must contend with his own thoughts and feelings on the subject.

What’s crucial, however, is the moment makes it clear Obi-Wan has NOT lost faith in the Force itself, but only his own ability to follow it. He’s lost faith in himself, and until he can repair that within himself, he’ll continue to struggle “turning on the light.” It speaks to the core themes of hope in Star Wars, while wrapping it uniquely through the lens of this iconic character.

For all the chatter we’ve seen lately about how Andor has blown every other Star Wars show out of the water (and it has in many ways), I still find myself thinking back on Obi-Wan Kenobi. This moment specifically. While there are plenty of valid criticisms to be made about the production quality and overall story, Kenobi succeeds in capturing the HEART of Star Wars via moments like this conversation.

It’s crazy to look back at all the amazing things we’ve seen in Star Wars storytelling this year. Just within the projects I’ve talked about here there are more moments I could easily list on here as well. It’s a high bar, but it already looks like 2023 is primed to be even bigger.

What Star Wars moments were you favorite this year?