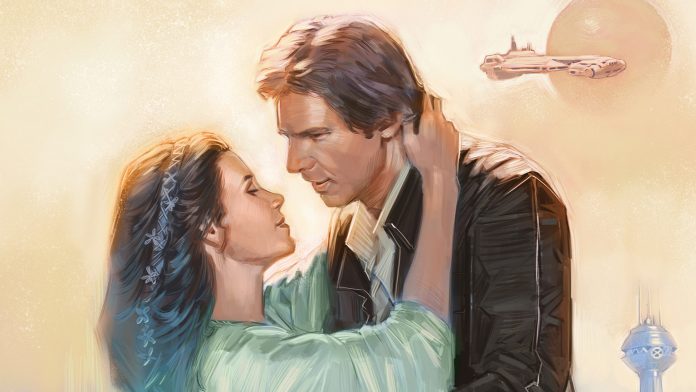 The latest Star Wars novel, The Princess and the Scoundrel, is a different story than we’re used to, but all the more enjoyable for it.

From a thrilling/vital new story of the Clone Wars, to the lore packed, gap-filling adventure set before the Sequel Trilogy, the last couple Star Wars novels have been treading some heavier ground lately. Both Brotherhood and Shadow of the Sith were amazing, giving fans essential stories during critical time periods while being tense thrill-rides throughout.

In this way, Beth Revis’ The Princess and the Scoundrel feels almost like a cool breeze…a palette cleanser if you will. That’s not to say the novel doesn’t get into some more serious themes or have more important things to say (it does), but the overall presentation makes it feel like a respite from all the impending doom and heaviness of the galaxy far, far away.

Princess and the Scoundrel picks up the story after the events of Return of the Jedi…I’m talking literally minutes after the credits begin to roll. The Rebels are celebrating their victory on Endor, but they know the war is far from over. As celebration quickly turns to what needs to be accomplished next, it seems like a strange time to propose to someone. Well, that’s what Han Solo does best!

In the whirlwind of the moment, the iconic couple realize they want to share the rest of their lives together. Far from feeling out of place, however, it’s an excellent opportunity to show hope to the galaxy at large, and how love flourishes in the ashes of war. With that in mind, Mon Mothma helps ensure Han and Leia not only get an impressive wedding (even as they live among the Ewoks), but a lavish honeymoon to boot.

With the Emperor now deposed and the Rebel Alliance declaring the New Republic as the legitimate government, various organizations/companies are now free to do what they want. One such venture is the Halcyon Legacy, a pleasure cruiser from the Chandrila Star Line that had been forced into the service of the Empire after its formation.

Without the shackles of the Empire, the Halcyon is now able to get back to its original purpose: providing a luxury experience for their passengers. Mon Mothma pulls some strings to give Han and Leia passage on the ship’s grand re-opening voyage.

Along the way, Leia sees an opportunity to bring another important planet into the budding New Republic and finds a way to get the Halcyon to make a detour. What they discover, however, is the reality of the war not being over and the atrocities the Empire has always been willing to commit. With only themselves and no backup, Han and Leia must find a way to save the planet and not entirely derail their new marriage along the way.

What I enjoyed most about The Princess and the Scoundrel is how, even among all the action/intrigue stuff going on, the core of the story is still very much focused on Han and Leia’s relationship. Sure, some “big” stuff is going on, but the way they deal with it is through the lens of how it affects their new dynamic.

They’re still getting used to the idea of being married and all that entails. They know their lives will change, but they haven’t quite had the time to figure it out yet. How do the fiercely independent heroes reckon with joining their lives while still staying true to their ideals.

This is the main focus of the book, even more than the bigger events that go down within it. I loved that approach to the story, and the book keeps that tight focus on the characters by having chapters alternate between Han and Leia. In this way, we get to see their thoughts/perspective on the same things going on and how they feel about it.

It’s a neat approach to telling the story, as we can see how their thoughts/goals are generally the same, even if they themselves struggle to see it in one another. As novel continues and the two begin to figure out their new roles/dynamic, the chapters begin to mesh together better as we can see their perspectives begin to align. It’s a subtle way of showing their strong connection, and how their love is still continuing to grow.

Along these same lines, I was really impressed with how perfectly Revis was able to capture the “voices” of these iconic characters. In other novels, which take place in between films, there’s normally enough of a time period buffer that any differences in tone can be explained by the time. Princess and the Scoundrel taking place immediately after ROTJ, however, doesn’t have that advantage.

Somehow, Revis manages to deftly bring to life the versions of the characters we know and love while putting them in a new story. From their dialog, to described mannerisms, there’s no denying this is the Han and Leia we remember from the Original Trilogy. It’s easy enough to envision them saying these lines in one of the movies, which made reading all the more enjoyable.

The Princess and the Scoundrel sets itself apart from other Star Wars novels in that the primary “threat” or problem isn’t a constant source of tension. Instead, it allows the characters the opportunity to just EXIST, be themselves and understand them as people outside the context of galactic shaping events. The result is absolutely delightful.

I mean, a good portion of the book before they even get to the Halcyon and dealing with Imperial holdouts, is focused on their wedding and the events leading to that. Despite the fact I couldn’t stop turning the pages, there’s an unhurried pace to those moments, letting the beauty of their relationship shine through.

It’s hard to describe it, but just know that I had a massive smile on my face throughout so much of this book. You feel the joy of their union and how they come to appreciate each other even more in their new dynamic. It’s just…well, delightful is the best word.

That’s not to say there isn’t any action, however. In fact, there’s quite a bit of solid Star Wars sized set pieces that happen. Even as the action intensifies, and the pew pews start flying, however, it manages to retain the tone it started with.

I can’t say the story of Han and Leia’s honeymoon is something I felt was essential before. Thanks to The Princess and the Scoundrel, however, it feels like a story that significantly adds to their character arcs and where we find them later on (in books like Last Shot and even Bloodline).

I loved it. I enjoyed it just as much as I have the last couple novels, but for very different reasons. Where Shadow of the Sith provided some necessary insight to key events and dramatically added to the overall lore, Princess and the Scoundrel gave me something I didn’t know I needed: seeing these characters LIVE and be happy.

The Star Wars story has always been about finding hope even among the most dire circumstance, and this novel takes that idea to the next step. Showing how that hope can lead to true joy. That doesn’t mean times can’t still be difficult, and challenges won’t present themselves, but that happiness can be the norm.

The Princess and the Scoundrel is a feel-good love story set in the galaxy far, far away that manages to hit all the right notes. Don’t skip out on this one.