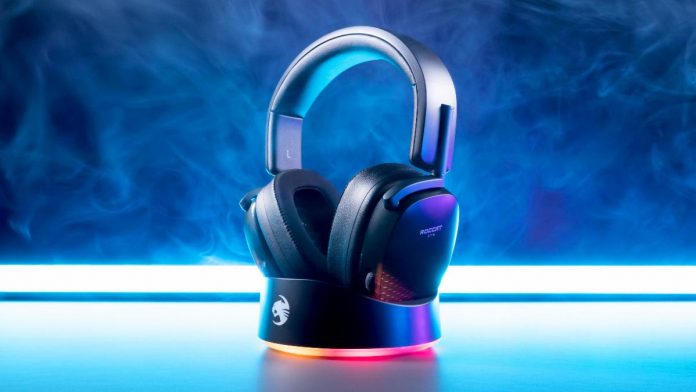 It’s almost the end of 2022, but before we ring in the new year, we look back at some of the tech released this year. When it comes to reviewing new gaming gear, it can be a little tricky. Sure, it’s easy to see the pros and cons of a product straight out of the box, but how can you review longevity? In this review series, I’m discussing some products I’ve been working with for several months to see how well they’ve performed—in addition to the features they have.

Last year, ROCCAT released a new wireless PC Gaming Headset called the Syn Pro Air. As you may have remembered, I wasn’t too keen on the headset for its design and the software that accompanied it: Neon. Thankfully, ROCCAT took note of the flaws in their 2021 model and worked to improve their wireless Gaming Headset for 2022. By adding some new elements, they’ve made it far superior to the previous model. This is our review of the ROCCAT Syn Max Air.

I think the best way to start this review is going from the outside in. From the moment you receive your ROCCAT Syn Max Air, it makes for a really nice experience. The box that contains the Syn Max Air opens up like a door. It isn’t your standard box where you pull out plastic and those weird freshness packets or anything like that. No, upon opening that door, you find your Syn Max Air nestled in all its glory within the confines of a foam frame. Underneath that frame are the stand/transmitter, mic, wires, and instructions.

While packaging isn’t always indicative of how the product will be, it’s nice ROCCAT put a lot of thought into how they wanted the user to feel when they purchased the Syn Max Air. I, for one, felt like I was in for a really cool experience and was being rewarded for using the product.

At first glance, the headset looks very similar to its predecessor; not much has changed about the frame. It is still a plastic frame and has the unique headband adjuster on the outside that I thought was odd with the Syn Pro Air. Even the lighting style is similar, as it has an almost honeycomb lighting style speaker’s outer shell. It also has similar buttons and wheels underneath the headphones.

While the design is pretty much the same, the Syn Max Air manages to feel unique. For one, the headset feels heftier and more durable than the previous version. Secondly, the lighting seems brighter than before. I could actually see the light accents in a lit room, whereas before, I had to be in complete darkness in order to see the LEDs dance. There was never a problem with comfort in the Syn Pro Air and that stays consistent with the Syn Max Air. The earcups sport a leather-like exterior with a memory foam interior that goes over the ears. It makes for easy wear throughout the 16 hour battery life. Even for someone, like me, who wears glasses there was never any discomfort while wearing the Syn Max Air during long playthroughs.

I mentioned the 16 hour battery life and that’s pretty much as advertised. In the months I tested the Syn Max Air, I didn’t see much degradation with the battery life, either. It stayed pretty consistent with the 16 hours on a full charge. It’s also advertised that the Syn Max Air only needs about 15 minutes of charging time to net 3 hours of play time, which is also true in my experience. However, after trying that way a few times, I opted to just let it fully charge when I needed to. It only took about an hour to completely recharge the battery and makes much more sense than having to plug it back in every three hours.

That said, the wait was worth it for those speakers. The Syn Max Air includes 50mm speakers with neodymium magnets to make all sound crystal clear. In all honesty, I didn’t know what neodymium magnets were before testing the Syn Max Air…but it definitely made the sound crisp and clear. I still prefer the richness of the wood composite-technology that the Turtle Beach Recons employ, but these 50mm speakers are wonderful on the ears.

The way it distributes sound and enhances the music and noises from games is terrific. I tested the Syn Max Air with titles like God of War: Ragnarok, Elden Ring, Apex Legends, and Destiny 2 just to name a few. The sound quality throughout the months of testing was crystal clear with no degradation whatsoever.

A problem gamers face with some headsets is the longer you use one, the sound tends to deteriorate. Or the connection gets a bit spotty (primarily with wireless headsets). Thankfully, that wasn’t something I encountered over the months I used the Syn Max Air. The sound stayed true and consistent and I never had a problem connecting the headset to my devices.

Speaking of connecting headsets to devices, let’s talk about the transmitter. The Syn Max Air comes with a stand that also serves as a wireless transmitter to other devices. It’s also a charging dock, so it has a multitude of uses. Plus, it also looks really cool with the lighting underneath. Between this transmitter and the overall bluetooth capabilities of the Syn Max Air, the headset is able to connect to PCs, Nintendo Switch, and the PlayStation 5. Connecting to the PC and Nintendo Switch were easy. Simply connect the transmitter to the PC and make the headset discoverable on your PC and done. For the Switch, just make the headset discoverable.

However, for the PS5, I had a whale of a time getting that headset to connect to it mainly because Sony is weird about other bluetooth headsets. They really just want you to use their proprietary headsets for 3D audio, even though the Syn Max Air has 3D audio capability. Nevertheless, it required plugging in the USB-C from the transmitter PC plug-in to the PS5 and then making the Syn Max Air discoverable. The cumbersome thing was when I’d have to charge the Syn Max Air, it required me to unplug the transmitter from the PC plug-in to the charging plug-in. It’s not a big deal but also not very convenient.

I really like that the Syn Max Air headset isn’t exclusively a PC headset like the Syn Pro Air was. I like that I can use a suped-up wireless headset on my PS5 and Nintendo Switch. That said, it really unlocks when it’s on the PC. It becomes fully customizable in terms of lighting and sound. You can change how the lights move and how they interact with other AIMO-included devices. Plus, you can utilize Turtle Beach/ROCCAT proprietary sound features like Superhuman Hearing. I still don’t prefer to use Superhuman Hearing, mainly because it makes sound a little too magnified for me but it’s available to you, as is adjusting bass and treble.

The Syn Max Air also includes the Turtle Beach/ROCCAT proprietary mic called TruSpeak. In all my previous reviews of Turtle Beach and ROCCAT products, I have gushed over this mic and I won’t stop now. It really is a terrific mic, as it only captures your voice and not that of other sounds around you. It makes communication so nice and clear, in that aspect. You can also remove this mic, if you so wish, but I prefer to just flip it up to mute myself because I don’t want to lose the mic and have to search for it later.

Overall, the Syn Max Air is a massive improvement from the Syn Pro Air of last year. I really appreciate that ROCCAT took notice and made an effort to improve and enhance this year’s wireless headset. The Syn Max Air delivers in sound, comfort, and accessibility in every way you would want it to. I would like to see the transmitter become a bit more convenient, but outside of that I’ve loved my time with the Syn Max Air and it was one of my favorite headsets to use in 2022.