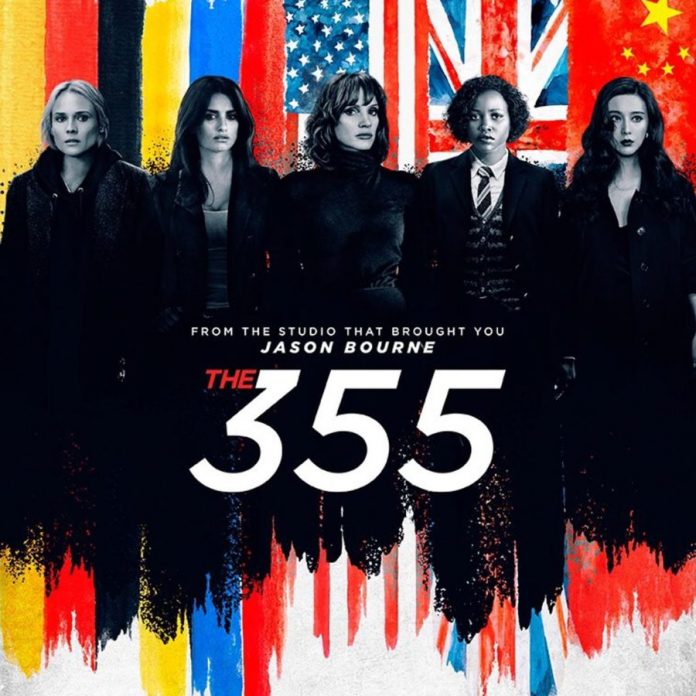 Simon Kinberg’s spy thriller, The 355, arrives this weekend to kick off the New Year in film releases but is it worth checking out? Let’s talk.

The 355 was originally slated to arrive this time last year, but like many movies, ended up pushed back due to the pandemic. After a year of waiting, however, it’s time for the spy/action thriller to take the stage.

Like normal, I plan to keep this review spoiler free (at least as much as possible). Considering it’s a spy/espionage flick, however, that leaves me with very little story points to actually discuss. Still, I’ll do what I can to lay out the basics.

When what’s expected to be a drug bust goes wrong, a DNI Agent (played by Édgar Ramírez) finds himself in possession of a new kind of weapon. Though it’s small, it has the ability to tap into every computer system imaginable, even to the point of bringing down airplanes right out of the sky.

Obviously it’s a weapon all the bad guys, all over the world, want to get their hands on. This, of course, is high on the list of every major defense/covert agency (CIA, MI6, BND, etc) across the globe to recover. When an attempt to recapture the device goes wrong, it manages to land in the hand of mercenaries, who then put it up for auction to the world’s most dangerous terrorists.

Already on the case, though coming at it from different angles, Mace Brown (Jessica Chastain), Khadijah (Lupita Nyong’o), Marie Schmidt (Diane Kruger), Graciela (Penélope Cruz), and Lin Mi Sheng (Fan Bingbing) must find a way to work together. Even as people within their own respective agencies seem set against them, they must learn to trust one another and put their various skills together in order to, quite literally, save the world.

That’s the simple version of the story. The reality is a bit more complex as it throws in all manner of spy antics. From double (triple?) crosses, not fully knowing who’s on who’s side, and more than a few red herrings, there’s much more going on.

By and large, it handles these elements competently enough. Though there does come a moment (around a third of the way in), where it feels almost comical in how many back-to-back turnarounds/revelations happen within a short period of time. Mostly due to the fact that none of the reveals felt particularly surprising. They all line up with most of the spy movie cliches.

This isn’t necessarily a bad thing, but it’s certainly not paving any new ground in that respect. Honestly, once all the big revelations are out in the open and the film finally turns into the inter-agency team-up story to reclaim the device, is where The 355 seems to find its stride. It’s just a bummer the first half of the movie to that point felt like a slog of basic tropes.

Thankfully the stellar cast helps pull the story through those points and by the third act, I was fully invested in the story and the action playing out. These ladies are a delight to see play off one another, and they do it in a way that feels completely natural. Even when the story doesn’t give them much to go with, they seem to fully embody the characters, giving them a sense of depth and history the plot doesn’t have time to get into.

Don’t get me entirely wrong here, the film does present some interesting/fresh ideas. I really loved the “MacGuffin” in the film. It’s something a bit outside the norm, but is presented as a genuinely scary threat. While the overall idea of bad guys/good guys not being clearcut isn’t exactly a new concept for these films, I did appreciate the way it was spun this time around; being tied directly into the MacGuffin’s nature.

I think The 355‘s biggest issue, and it’s general feeling of “okay-ness,” boils down almost entirely to the execution. It’s a solid enough story, has a great cast, and decent action. None of it really shines in the way it feels like it could, however. It’s not the first time I’ve felt this way about Simon Kinberg movies. He feels like a solid idea guy, but when it comes to executing those on his own…ehhhhhhh.

Never is that more clear in this film than the action sequences. It is obvious that all of the actresses put in time and effort to look like badasses through and through. The skills they showcase are evident, but the camera work and editing structure does little to highlight those elements.

For example, from an early moment, we see Chastain’s Mace doing some training/sparring with another agent. As a martial artist myself, I was impressed with the techniques on display and the way she performed them, but it was shot so boring. It doesn’t try to be, but it relies heavily on the frantic editing style that’s usually used in action films to make more static action sequences (like Liam Neeson jumping over a fence) appear more dynamic/frenetic.

When it’s used during moments where things are actually GOOD, however, it has the opposite effect. The constant jump between close-ups and shifting angles (all of which cover basic static camera shots) distracts from the action playing out. It’s frustrating because I could tell there was some really solid action pieces going down. Hell, the third act alone almost entirely makes up for the so-so story up to that point (Fan Bingbing whips ungodly amounts of ass and needs more movies ASAP).

I can’t help but wonder what a more experience director would have been able to do with this cast and story…As it stands, The 355 still managed to hook me on the characters and left me wanting to see what would come next for them. Their chemistry alone would make for some interesting franchise possibilities, just bring in some new behind the scenes people.