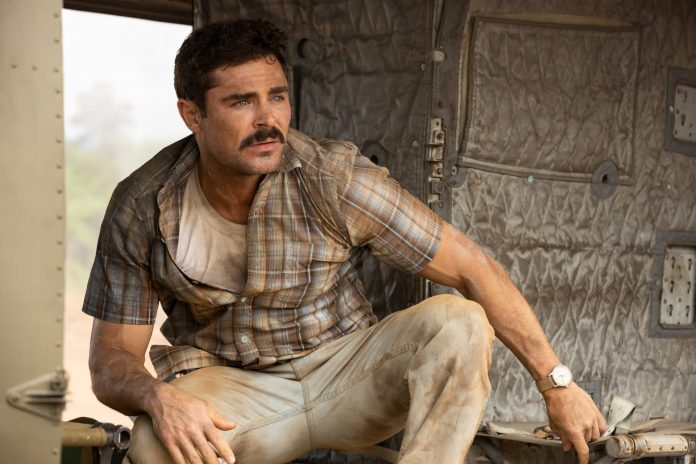 Peter Farrelly, of Green Book fame, delivers a true adaptation of a Vietnam War story written with a different perspective to mixed results.

Adapted from  the memoir written by John “Chick” Donohue and J.T. Molloy, The Greatest Beer Run Ever tells the story of Chickie Donahue. Played by Zac Efron, Donahue is a young part-time merchant marine known by his family and friends as a bit of a slacker. Unable to finish anything he starts, and someone who drinks all night with his buddies and sleeps half the day away when not on duty.

Although he remains a staunch Patriot who would argue until he is blue in the face over his love for his country, he becomes disheartened by the amount of friends killed in action serving in the Vietnam War. One night during a drunken conversation with friends at the favorite local neighborhood bar, the bar owner nicknamed The Colonel (Bill Murray) floats a daydream of going overseas to visit with their friends, show love and support, and offer them a beer.

A lightbulb seems to go off in Chickie’s eyes and, in spite of everyone not believing he would see it through, he finds the next ship set for Vietnam. Packing a large travel bag full of American beer, Donahue sets sail for the wildest beer run ever.

Let’s talk plot and dialogue. When I first heard the name The Greatest Beer Run Ever, my first thoughts were to strap in for some zany comdy that does not require much thought when watching such as The Hangover or Peter Farrelly’s Dumb and Dumber. However, it proved to be so much more in that it was a true story that took a look at the complexities and issues surrounding the Vietnam War. Not only for those fighting, but for those at home with some comedic undertones sprinkled in mostly during the first half of the film.  The plotline truly gives the term “greatest” and ironic meaning considering the beer run destination.

Furthermore, it’s interesting how Farrelly delivers a unique perspective of the Vietnam War not normally utilized, through a crafty civilian working his way through a war zone. The more I thought about it, however, this is not new to the writer/director. Afterall, when you take a look at  the highly popular, award winning Green Book, it is a story tackling the issue of racism utilizing a road trip for a musical tour with the leading character being an average bouncer turned driver to accomplish more awareness on the subject.

The director uses a similar coming-of-age element with a different spin in The Greatest Beer Run Ever when he takes an immature screw up like Chickie Donahue, throws him in a country experiencing one of the most controversial wars in history, and allows him to witness some things that would forever change his life. In fact, there are several scenes of the patriotic Chickie stopping someone in their tracks for saying anything negative about the United States or the president, himself, including when he meets with war correspondent Coates (Russell Crowe) who begins to pull the rose colored glasses off him as a brief teacher of what’s really going on as they work their way to safety.

Don’t shout me down, but I have to say Zac Efron has come a long way since his High School Musical days. With every role he seems to show more depth than the last while still keeping that spark of boyish charm from those teen heart throb puff pieces that gave him his start.  However, there is also a haunting energy that radiates through his eyes due to experience and age which gives him the ability to take a crack at more serious roles. This seems to lend well to his role as Chickie Donahue, a grown man seemingly immature for his age, naive and one-sided in his convictions. He’s in need of something to shock him into growing up; facing the facts that war is gruesome, cover-ups happen, and gentlemanly “rules of engagement” aren’t always in effect.

I had a love-hate relationship with the utilization of Bill Murray and Russell Crowe. Don’t get me wrong, they both were wonderful in their respective roles, but when I became aware of their involvement in the cast there was a certain expectation; especially for Crowe who was featured in a key promo shot. Both men were hired to play supporting characters, but it just felt like more could be added for supportive purposes and to create more depth and understanding of The Colonel and Coats.

In fact, more screen time by these characters could have added more depth to the film as a whole. There was just enough to understand that these two represent two polar opposite sides of a very delicate situation: The Colonel (Murray) being the retired veteran and patriotic to the core, and Coates (Crowe) the reporter always in search of the truth lending him a jaded political view whose sole plot purpose is to deliver a crash course that everything isn’t always what it seems when it comes to war and government.

Tonally, The Greatest Beer Run Ever seemed to be all over the place. There were moments of drunken outlandishly crazy conversations with friends, followed by sleeping until three in the afternoon providing a few chuckles at the beginning. There were several instances of intense war-time violence for dramatic effect, and segments caught somewhere in-between that did not seem to have a direct path. For instance, during two scenes involving an attack on the city and a prisoner of war it felt like the scene was meant for intensity but the reactions and dialogue made it hard to deliver the drama on-screen.

Most of the time the film settings were simplistic and had the atmosphere and feel of movies from the same era such as a local dive bar, a street corner or local hotel bar in Vietnam. However, at times, more attention to detail could have been placed at setting the scene. Chickie’s sister was very much against the war, and began to join the protests which did not sit well with her brother. Between the clash with the protesters and the scene where Chickie shows up in what is described as one of the most dangerous military post areas the setting just felt awkward and thrown together. I hate to say it, but the latter of the two seemed like it could have been thrown together in someone’s backyard.