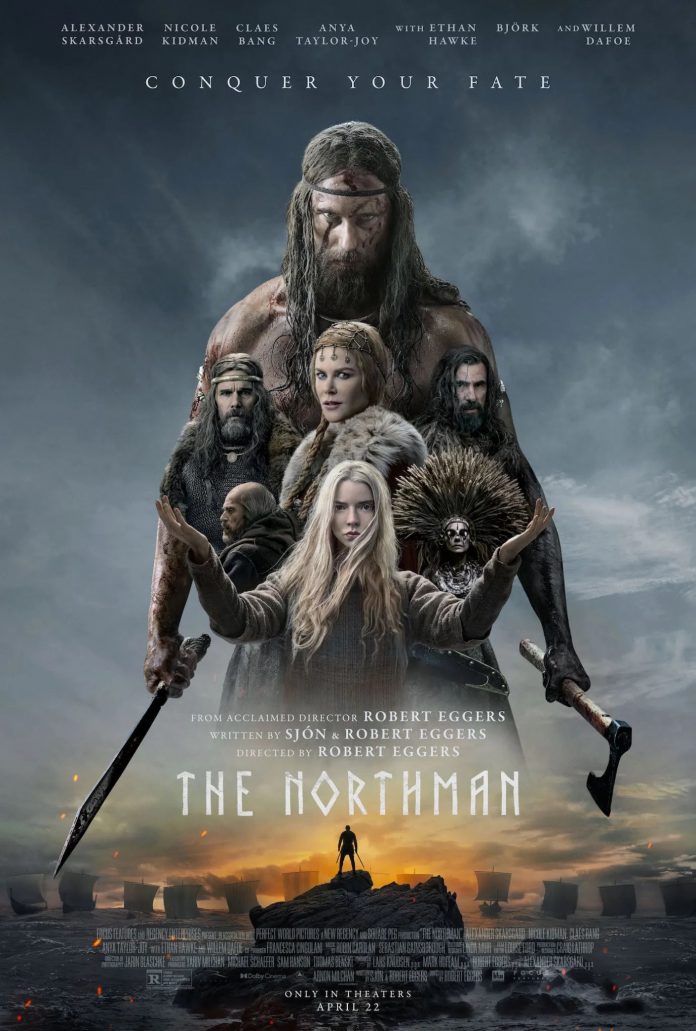 The Northman is an engaging modern interpretation of an epic Viking saga. Incredible visuals and gritty action play against intense natural and supernatural forces.

There are certain time periods which feel like havens for epic adventure films. Consider how many times we have seen these types of films set in World War 2, the middle ages, or ancient civilizations like the Egyptians, Romans, or Greeks. The past cinematic successes, and perhaps the North American bias towards those moments in history has, in turn, convinced studios to spend major capital on films telling stories in those eras. Moments in history outside of these are rarely, if ever considered with as much enthusiasm from both studios and audiences.

The Northman
Directed By: Robert Eggers

This makes The Northman an interesting anomaly within the landscape of modern cinema. Not only is it a film that takes place within a historic society that is not often featured in mainstream cinema, but it is a moderately budgeted endeavor too. The societies of early Medieval Scandinavian tribes, also known as Vikings, may have garnered some attention on the small screen, but major films have been few and far between (no, we’re not countinging any Marvel movies). This gives audiences an excellent opportunity to not only witness a new type of setting for an adventure film, but experience it in a way that achieves a sophisticated and exhilarating artistic perspective.

Interestingly, The Northman is based upon the Viking legend of Amleth, which was a major influence on Shakespeare’s Hamlet. Because of this connection, the story of The Northman has many common threads with a classic drama audiences have likely seen before. On one hand that does make the film feel a bit predictable, but on the other hand it is refreshing to see it from the perspective of honoring the original story rather than the “remake”. It’s also a reminder of how impactful stories can transcend not only geographic or social boundaries, but the grasp of time itself.

The Northman follows the life of Amleth, a prince whose father is murdered by Amleth’s uncle. Amleth escapes, but vows revenge to kill his uncle, rescue his mother, and secure the kingdom that is rightfully his. However, Amleth’s path leads him to join a band of Vikings, where he looses grasp of who he is. During one raid he meets a sorceress who reminds him of his oath. Amleth stows away on a slave ship bound for Iceland where his uncle has been exhiled, and along the way falls for a fellow slave named Olga who helps him plan and execute his revenge.

The script was co-written with Icelandic poet/novelist/lyricist Sjon, and the end result certainly has a poetic element about it. While much of the dialogue is not esoteric, there are moments when the film’s beautiful visuals intertwine with emotional monologues to create awe-inspiring passages. In these moments the realism of the film’s more grounded hero’s journey is elevated to mythic status. The film plays these moments partially like an overactive imagination and partially like a protagonist ascending his earthly bounds. This duality allows the film to approach the unnatural without leaving the realism behind.

One of the ongoing themes of the film is Amleth’s coming of age (portrayed by Alexander Skarsgard). When we first meet him he is a sweet and innocent boy – his own father comments on how he is ill-prepared for the trials of a king. But the experience of his father’s murder, and his resulting exile into the brutality of life as a Viking berserker moves him to the opposite end of the spectrum. Amleth becomes a wolf in human form, completely ignoring the weakness of his human emotions which used to define who he was. As he progresses on his path for revenge, he comes to find that he needs to exist somewhere in the middle of the two extremes.

Olga (Anya Taylor-Joy) is one aspect of Amleth’s journey which forces him to reconsider his fate. Certainly by falling for her he now has another person’s well-being to consider with the implications of his actions. But more than that she provides him with hope. The film’s imagery and portrayal of violence paints a bleak picture. Combined with the shadowed cinematography and powerful mystic imagery, the world of The Northman is downright terrifying. From the cold, the unrelenting weather, and the isolation – there’s nothing to comfort Amleth but the fire that burns inside him for revenge. Olga shows him that there can be more.

If this sounds similar to the tried and true formula we’ve seen in other epic films detailing the rise of a heroic character hell-bent on redemption, you’re not wrong. The film’s story and almost singular commitment to its protagonist does make it feel somewhat shallow and predictable. But that doesn’t mean it’s a one-trick pony. Besides the film’s uncommon setting, The Northman invites additional interest because of what it represents as a reflection of up-and-coming filmmaker Robert Eggers.

Until this point Eggers has directed auteur indie horror films (The Witch, and The Lighthouse). As a director he is fascinated with the darker corners of history, especially when reality clashes with the surreal or supernatural. The Northman is Egger’s first step into making a more mainstream film, and it carries forward his creative vision and enthusiasm for the subject matter in a more straightforward way than those other films. I wouldn’t say it waters down his impact, but he is able to adapt his approach to fit a more direct and singular purpose without losing that intrigue and mysticism his films have been known for.

While much of the film does explore the realities of living in a Viking society before the middle ages, it also spends a good amount of time exploring the ideologies and beliefs of these people. Those are the moments you can feel Egger’s ears perk up. He cuts to black and white and offers glimpses of gods with prophecies spoken from the mouths of sorceresses. These sequences feel like skits taking place inside the characters’ heads. Real or not they invite the audience into the culture without needing a single word of explanation.

At times this makes The Northman feel more like a folklore come alive than it does a gritty historical adventure that could have actually happened. But really, it’s both. That duality is what helps to set The Northman apart from other historical epics. Maybe it isn’t the most realistic, maybe it doesn’t have the best acting. But those blemishes don’t restrict the final product. It remains a fitting, and powerful retelling of a classic legend, but with modern interpretation.