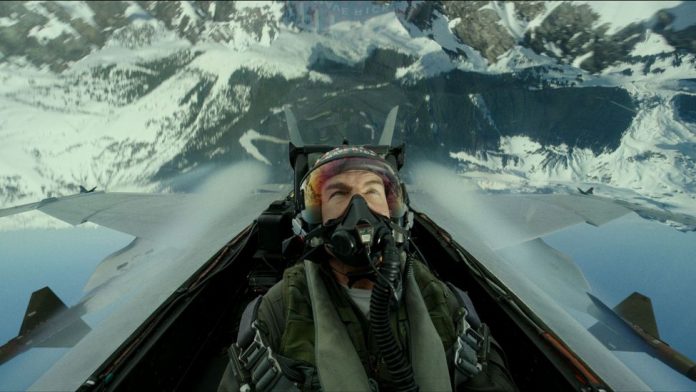 Top Gun: Maverick is an incredibly exciting summer blockbuster that pulls off the  unlikely accomplishment of being better than the original film.

The problem with films that rely on nostalgia as the main point of interest is that they will never be able to achieve the feel of the original. Too often they are chocked full of modern CGI green screen gobbledygook, a story that is contorted to deal with more contemporary issues, and helmed by a new director who has his/her own style to convey. Taking the ideas behind an old movie and making them new again doesn’t work. At least, it hasn’t worked very well until now.

Against all odds, Top Gun: Maverick proves wrong all of our assumptions about revisiting classic films. This is a sequel that is being released into theaters a whopping 34 years after the original helped to define 80’s action blockbuster moviemaking, and it doesn’t miss a beat. Not only does Top Gun: Maverick work as a piece of well-crafted nostalgia, it actually appreciates and improves upon the original film.

The only film I can think of that achieves this same feat in blockbuster fashion is Mad Max: Fury Road. But that film could not be any different from Top Gun: Maverick. For starters Fury Road was conceived and controlled by the same director and creator of the original cult classic. Second, it updated the film’s concept and execution for modern standards. In terms of those important attributes, Top Gun: Maverick only has modern production values working to its favor. In most other regards it has the markings of a by-the-numbers delayed sequel to a classic 80’s film (think Wall Street: Money Never Sleeps, or Ghostbusters: Afterlife).

The most stunning attribute of Top Gun: Maverick isn’t the fact that the film feels like it could have been made in 1986 let alone 2022, it’s the fact that the old-school delivery makes it special in this day and age. It harkens back to pre-superhero blockbuster action movies, which you would think would feel outdated and slow, but it doesn’t. Top Gun: Maverick is bonkers entertainment for the sake of entertainment, and that feels refreshing. Not because it is all about turn-your-brain-off-at-the-door thrills, but because it feels timeless. The things it does really well are things that will never NOT be entertaining.

Equally important is the way the film walks in the same footprints of the original but it doesn’t ever feel like a gimmick or an intrusion onto hallowed ground. It utilizes the same type of plot, even the same beats as the original without wearing out its welcome. Many sequels essentially repeat the plot of the original hit film with slight deviation in order to maintain the connection, but are rarely very successful in doing so. Top Gun: Maverick isn’t afraid to give you the things you’ve seen before, but wrapped up in a prettier package. The tropes don’t feel like lazy writing, they are intentional blankets with which to coddle you as you experience this high stakes adrenaline-filled joy ride.

The film starts with Captain Pete Mitchell aka. ‘Maverick’ aka Tom Cruise working as a test pilot trying to break Mach 10 in a hypersonic jet against his orders. He crashes the plane but rather than losing his career he is saved by his friend (Admiral Tom ‘Iceman’ Kazansky) and assigned to be an instructor at the Top Gun training facility. There he learns the Navy is training for a very dangerous top secret mission and has brought in their best pilots, one of which happens to be the son of Maverick’s deceased wingman and best friend Nick “Goose” Bradshaw.

Story-wise the film doesn’t break any barriers, feeling like somewhat of a retread of the original. But what makes up for that is Maverick’s position in it all. He’s still the hot-shot pilot everyone remembers, but his antics haven’t really gotten him anywhere in life. No family, a stalled career, out-of-touch, and his youth is far behind him. It’s a more mature turn for the character, and that actually makes him easier to root for. The perspective of the film compared with the original also changes from this youthful exuberance of anything is possible to the stark realities of the here and now, which I thought was very appropriate for this day and age.

That’s not to say the film’s more serious tone puts any dampers on the fun. I would argue it makes it more balanced, and has the story more character-driven than in the past. This works because the themes the film deals with are not only widely appealing, but help to accent the action. For example it is clear that Maverick wants to be closer to Goose’s son (“Rooster”), but isn’t sure how to approach that relationship and so he stays on the sidelines. He is thrust into the difficult position of any parental figure where their child faces potential danger; let them face their fears, or shield them from it and prevent their growth. This provides additional stakes when things get crazy.

But also, for someone who has spent his whole life taking risks but never growing Maverick faces a very complicated conundrum. His path to finding a solution for this particular problem, as well as the considerable threats associated with his assigned mission, give the film ample substance beyond the “let’s fly jets” hook. And thankfully the film’s star is not only up to the task, but easily surpasses expectations. Tom Cruise flaunts the accomplished dramatic talents of his past which we have almost completely forgotten about. The rest of the talented cast is up for the task as well.

In addition to Cruise’s continued movie-making heroics, credit also has to be given to director Joseph Kosinski who is no stranger to neither delayed sequels of classic 80’s films (Tron: Legacy), nor the Tom Cruise action-movie experiences (Oblivion). Kosinski uses this experience to guide Top Gun: Maverick close to the realm of nostalgia, but not quite committing to it firmly. He uses the success of the original film and finds a way to build off of it organically. It’s an interesting mix of old ideas (and music, and shots) combined with new stuff.

I especially applaud the way the film intentionally leaves the action details a little vague. Like in the original film there’s no indication who the enemy is or where they are located. That places more emphasis on the characters, and essentially indicates that the filmmakers know you’re just here for the thrills anyway. Perhaps that is part of the reason why Top Gun: Maverick feels so refreshing; it’s an action film without the multi-faceted storytelling burden we’ve come to expect in our most expensive movies. Just like the pilots who have to face this type of situation in real life, the motivation isn’t about knowing who your enemy is. The motivation is doing your job as best you can so you can come home. There’s no fewer thrills for the viewer as a result.

Furthermore, Top Gun: Maverick doesn’t succumb to chest-thumping patriotism, blind machismo, or a fetishism towards weapons or violence. Any nods to those ideas are mostly tongue-in-cheek, which allows the film a maturity beyond the candy-coated exterior shell. Its fun, but not light-hearted or easy to forget. That’s not to say the film isn’t without its shortfalls. While it is great that they were able to honor a few members of the film’s original cast, all of those actors are men. Some viewers may also disagree with the film’s approach where it mimics the original. It does feel a bit repetitive and predictable, let alone dated. However, I was able to embrace the nostalgic approach because it wasn’t doing it just for the sake of reliving past success – it was creating its own as well.

I have had so much to say about this film that I haven’t even begun to describe its most fetching attribute; the action. Tom Cruise had said that he would not film a sequel to Top Gun until the technology was sufficient for them to be able to actually film inside the cockpit of the jets they would be piloting. That long wait is over; and it was worth it. Kosinski handles the (sizable) challenge very well. The film’s action pieces are not only incredibly exhilarating, but shot with breathtaking beauty. Top Gun: Maverick feels generations ahead of the original, and really creates an amazing near first-person experience. It really makes you consider the hardships the cast and crew went through to provide this level of entertainment. Go see it on the big screen if you can.