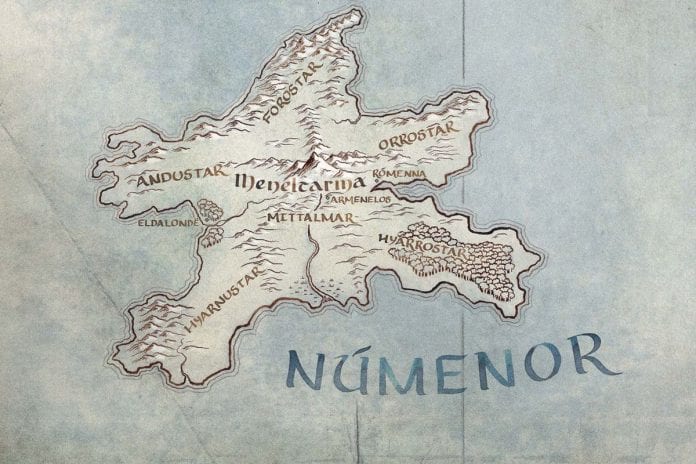 *warning: depending on how closely the ‘Lord of the Rings’ series follows Tolkien’s books, potential spoilers might be found below

It’s been known for some time that Amazon’s Lord of the Rings series will take place in the legendary Second Age of Middle-earth, but if you haven’t read The Silmarillion and The History of Middle-earth front to back, you might not know exactly what that means in terms of what the story will be about.

To help with this, I’m putting together some important information that you’ll want to know before The Lord of the Rings arrives on Prime Video.

First of all, the Second Age begins in the wake of some pretty huge events.

The First Age of Middle-earth ended with Morgoth, the original Dark Lord of Middle-earth and Sauron’s master, being captured and thrown into the Void by the Valar (the gods of Middle-earth for lack of a better word) after terrorizing the world for an Age and more.

The last battle against Morgoth was so catastrophic that the entire land of Beleriand, a large chunk of the continent, was destroyed and sank below the sea. In the wake of Morgoth’s defeat, most of the elves depart West over the sea, though not all (more on that in a moment). Sauron initially turns himself in for judgment, but balks at the prospect of facing the Valar and flees before facing any trial.

As Sauron plays a huge role in the Second Age, I’ll discuss him first.

The biggest thing to know is that this isn’t the Sauron we see in The Lord of the Rings or Hobbit films. Assuming the show starts at the beginning of the second age, this will initially be Sauron before any of the Rings of Power, including the One Ring, have been made. Furthermore, this all takes place before Sauron is reduced to the Great Eye.

In the Second Age, Sauron is still capable of giving himself a “fair and pleasing appearance” something Peter Jackson was initially going to reference in the Lord of the Rings films, but it was cut for time. In fact, this is how Sauron infiltrated the elves and made the Rings of Power in the first place: by disguising himself and going under the name of Annatar. I highly recommend remembering that name because I can almost guarantee it’ll come up during the series. Also, remember that Mordor as we know it doesn’t exist during the first part of the Second Age, so there’s a chance you might see how that dark realm was created.

The next most important thing to know about the Second Age is the island of Numenor. “The blood of Numenor” was referenced several times in Peter Jackson’s trilogy, and now we’ll be seeing Numenor’s story play out, hopefully in full.

What you need to know is that the island of Numenor was raised from the sea by the Valar as a reward for the Edain, three great houses of Men that fought with the Valar and the elves against Morgoth. The Edain are led to Numenor by Elros, Elrond’s twin brother, who was also half-elven but chose to be mortal while Elrond (as we know) chose to be an elf. As a further reward, the Edain were given lifespans three times that of a normal man, and permitted to live on an island that was closer to the immortal lands of the Valar than Middle-earth.

However, there was a catch, and it’s one you need to remember once Numenor’s story begins to play out on the show: the one thing the men of Numenor cannot do is sail so far West that they are out of sight of Numenor. They can go anywhere else, but they cannot go to the immortal lands of Aman and Tol Eressea where the elves live. That will be an important detail, and one that ultimately leads to Numenor’s doom.

Speaking of Elves, the hierarchy is somewhat different in the Second Age.

For one, most of the Elves still answer to a High King, something noticeably absent during the War of the Ring. In the Second Age, the current and final High King of the Elves is Gil-galad, who is briefly glimpsed during the prologue of The Fellowship of the Ring with one of the Three Rings and during the battle against Sauron, where he’s fighting with a huge spear.

Gil-galad is also, as far as I can make out, a cousin of Galadriel, who is NOT ruler of Lothlorien during the Second Age. In fact Lothlorien as we know it doesn’t properly exist yet. Instead, Galadriel and Celeborn eventually help found the realm of Eregion near Khazad-Dum (aka Moria) along with her cousin Celebrimbor.

Remember those fancy doors that formed the entrance to Moria? It was Celebrimbor’s people who helped make them and it was Celebrimbor who ultimately worked with Annatar (Sauron) and learned how to make the Rings of Power (but not, remember, the Three Elven Rings).

And since I’m on the subject, it’s likely we’ll get to see Khazad-Dum (Moria) at the height of its glory, something that’s only hinted at during The Fellowship of the Ring. That’ll be a change, seeing a Dwarven kingdom in its full glory, something we haven’t gotten to see all that often (the prologue of the first Hobbit film notwithstanding).

For those curious, the Balrog the Fellowship encounters in Moria wasn’t awoken until the Third Age, so we won’t be seeing that creature anytime soon (though it might be hinted at in foreshadowing).

Another important thing to know: there are no Wizards in Middle-earth during the Second Age. No Gandalf, no Saruman, no Radagast, none of it. The Wizards weren’t sent to Middle-earth until a thousand years into the Third Age, so don’t expect to see a young Gandalf or a young Saruman running around, it’s not happening.

These are the most important things you need to know about the Second Age of Middle-earth. Hopefully this gives you some idea of what to expect when The Lord of the Rings premieres later this year.

You can read the official synopsis here.