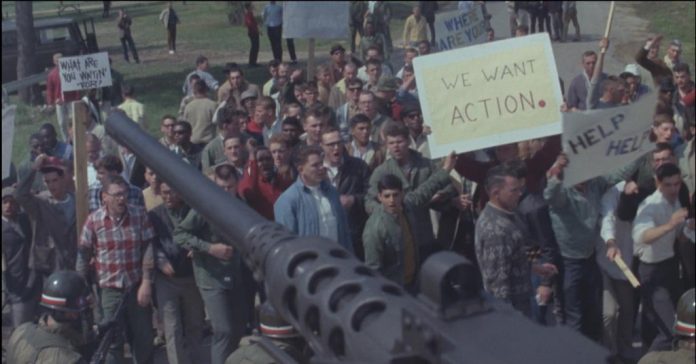 RIOTSVILLE, USA is a documentary that takes a look at some very uncomfortable truths with the use of archival footage.

I’ve already seen several documentaries during this year’s Sundance Film Festival, and so far all of them have stuck with me for the best of reasons. Directed by Sierra Pettengill, RIOTSVILLE, USA is no exception, as it uses archival footage from the late 1960s to shed light on how police forces across the United States began to grow and change in response to various movements sweeping across the nation.

The documentary is 100% archival footage, with subtitles and narration added in to explain certain situations and put everything into context. I will freely admit that before this festival I’d never heard of a ‘Riotsville’, which was a mock town where the military and police forces would stage riots for training purposes. The catch is, that these “riots” are staged according to how authorities believed they started, and it’s heavily implied throughout that these simulations are divorced from the reality of the situation.

Having seen the footage of these places in action, it’s fair to say that the footage is eye-opening to say the least. With tensions between the public and police being a serious issue in the last few years, a lot of that makes sense when you watch the story of RIOTSVILLE, USA. Here, in this documentary, it feels like the roots of how police forces became so militarized are documented. In effect, we’re seeing how a situation from over fifty years ago is continuing to affect society right now.

In fact I think that’s the most eye popping and disheartening thing about RIOTSVILLE, USA, the fact that fifty year old footage feels like it could be ripped right from today’s headlines. It’s depressing, having visual proof that almost nothing has changed in all this time. But it’s also good to have this acknowledged, because maybe if people see this documentary and become aware that nothing major has changed, maybe it can prompt something to happen now.

RIOTSVILLE, USA definitely sheds light on some uncomfortable truths, forcing viewers to acknowledge that there are some very messed up things occurring in our country, and have been for far longer than anyone in power wants to admit. If nothing else, this documentary opens a window on a part of the history of police that many might not know about, and that can ultimately be nothing but a good thing.