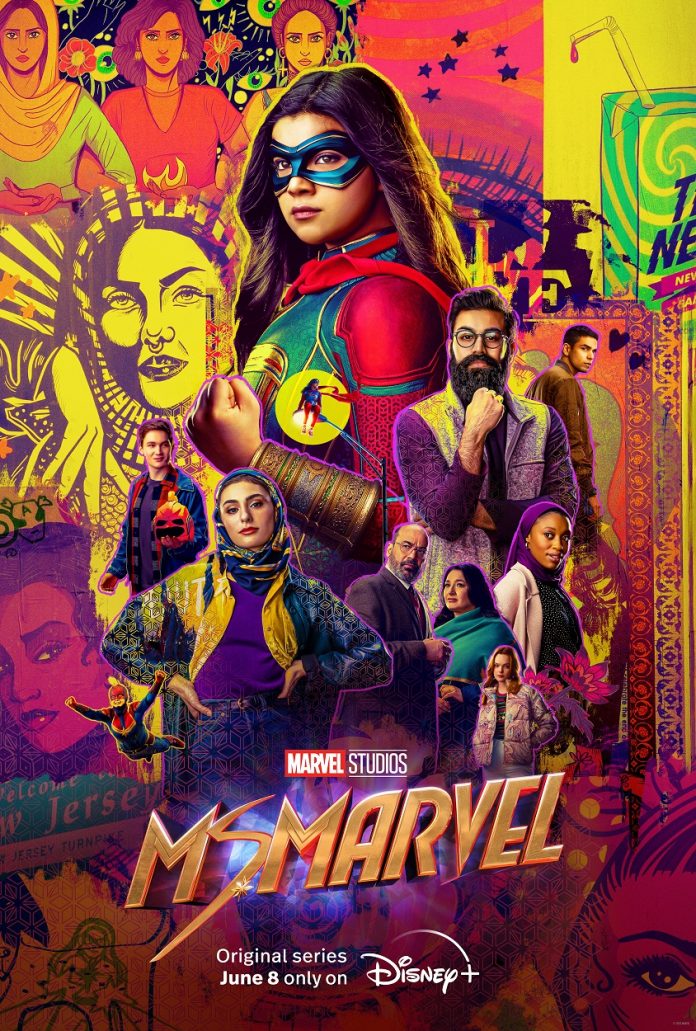 Marvel’s newest superhero arrives this week with Ms. Marvel on Disney+. After getting a chance to watch the first couple episodes, I’m all in.

To be entirely up front with you, I knew very little about Ms. Marvel (aside from some basics) going into this show. When it comes to comic reading, I’m actually more of a DC person and only dive into Marvel for some Spidey adventures. So, I can’t dive into the deeper aspects of the comic influences on the story, but I can tell you that the show is a ridiculous amount of fun. Something I think both fans and newcomers to the character (like me) will enjoy.

The show puts the focus on teenager Kamala Kahn (Iman Vellani) who must navigate the normal rigors of life in high school, being a Pakistani Muslim, and suddenly finding herself with super powers. The first two episodes only marginally touch on what seems to be the main story the series will be telling (we haven’t met any kind of antagonist yet). Instead, they’re really about setting the stage and getting you familiar with these characters.

In this regard, these episodes succeed in grand style. From Kamala herself, to her family members (overbearing, but clearly loving parents) and friends, all of these characters are almost instantly endearing. Iman is ridiculously charming as Kamala, combining the wistfulness, youth, and vulnerability of the character almost effortlessly. The surrounding cast are much the same, establishing themselves within Kamala’s world/group in equally engaging ways.

I’m going to make the comparison here, and it’s something I’m sure many will think of the first time they watch, if only because it released so recently. There are some strong Turning Red vibes going on. A teenage girl who loves her family/cultural heritage but goes through unexpected changes she can’t talk to them about? Yeah, it’s hard NOT to make those comparisons.

For me, though, I think this speaks more to how excellently the show establishes an overall tone/vibe. Like Turning Red, it expertly captures that teen movie feel in the same vein as classics like 10 Things I Hate About You and even The Duff (though the love interest angle isn’t a thing). It’s an approach that instantly puts you in the mindset of the younger characters and seeing the world through their eyes, yet still has an appeal for older viewers. Frankly, I think Ms. Marvel nails the teenage superhero aspect even better than the more recent Spider-Man flicks.

Speaking of other superheroes, I’m impressed with how Ms. Marvel is handling the MCU connections so far. Kamala is a character who’s fully grown up in this world full of heroes, and it’s neat to see how someone with that perspective interacts with the world around her. While we’ve seen hints of this in other shows (namely Kate Bishop), Ms. Marvel takes it to the next level.

This is a character who not only grew up knowing about the existence of superheroes and cosmic realities, she’s a fan! From vlogs, to podcasts, even fanfiction about the various Marvel heroes, Kamala has done it all. And she’s not alone. The world has become adjusted to this new norm, and the show immerses us into the perspective of these people.

One of the things Kamala is trying to do in the first couple episodes is make it to AvengerCon, a massive convention all about the “real-life” heroes in their world. It’s wild to see, but at the same time makes complete sense within the context of the world they’ve created. In previous shows/movies, we only see this aspect from the perspective of the heroes themselves, but now we’re getting the opposite side, and it’s a neat bit of world-building that sucked me in completely.

In many ways, this makes Ms. Marvel the MOST connected Marvel show so far. I mean, we even get a Drax reference in there at one point. Even so, they way it’s presented allows the story to still feel independent. Rather than using characters/cameos to flesh out the MCU connections, Ms. Marvel makes full use of the MCU’s WORLD to make those elements stand out. This allows the characters/story to still do their own thing (at least so far).

Along these same lines, I really enjoy how the show isn’t rushing itself in these first couple episodes. Yes, we get to see Kamala attain her powers, begin to use them, and try to figure out what’s going on. There are hints of a threat (something that feels more personal), but it takes its time in making sure you care about the characters and this world first.

Obviously, I’m not able to talk in any depth about the cultural aspect of Kamala and her family (and I strongly encourage you to seek out SWANA/MENA authored reviews), but I’ll quickly say I liked how the show presents her heritage. Namely, I like how it’s all just…there.

They don’t shy away from Kamala’s Pakistani heritage and seek to show it from a variety of different angles. Hell, the family regularly speaks Urdu throughout, using colloquialisms, as they engage in every day conversation. The best part, however, is that it all feels completely natural/normal. The show doesn’t go out of its way to explain the things we’re seeing, but rather drops you into it. This is Kamala’s normal, every day life, and that’s exactly how it feels while watching.

I don’t know if that’s making complete sense right now, but while watching, I felt like I was truly immersed into her world. There wasn’t a sense of “otherism” from the perspective given, and it made for more natural character connections throughout.

Despite being only two episodes into the series, and the main superhero story is just coming into focus…I’m very much loving Ms. Marvel. It nails the tone perfectly and feels like a show that has broad appeal for long-time fans and newcomers (of all ages).

I’m hoping the rest of the episodes retain the pacing in terms of story, keeping the focus on the character aspect without rushing to a big finale. Either way, I’m definitely all in on this one.