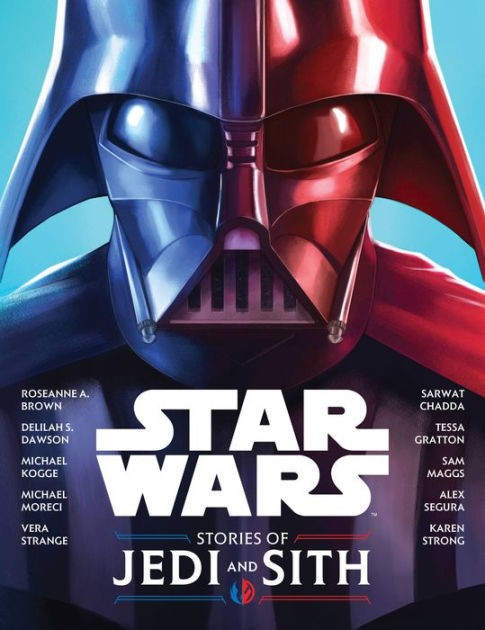 This week, Disney Books launches Star Wars: Stories of Jedi and Sith, a new anthology of short stories focused on those iconic Force-wielders.

If you’ve got a hankering for new Star Wars stories, but need them in bite-sized form…you’re in luck. A new anthology, compiling a total of 10 brand new stories. As the name implies, Stories of Jedi and Sith are entirely focused on the two enemy factions, and how their unique perspectives on the Force influence their lives.

The last short story anthology we got in this format (Stories of Light and Dark), were almost all retellings of story arcs shown in The Clone Wars series. This time around, however, these are all new stories for fans to enjoy in the same easy to digest format.

I’m not going to sit here and review each of the 10 stories individually…That would be a bit much. Instead, I’m going to share some overall impressions on the short stories. Before we get into it, however, here are all the authors included in the book and which character their stories focus on:

As you can see, the spread between Jedi and Sith is perfectly balanced at five each. While none of them connect to each other in any overt ways, the way in which they’re all arranged feels like they flow smoothly into one another. You get lighter stories countered with heavier material that leaves you thinking and there’s an overall pacing that keeps you invested even though they all covered different characters/eras.

Generally speaking, I enjoyed all of the stories given, though there are a few I think I’ll come back to while others are likely one and done. It’s hard to pin down why some didn’t work with me as well as others, but I think a lot of it boiled down to the types of stories being told. I mean, obviously I enjoyed my dark side characters (so I’m sure that’s a factor as well), but I’m definitely more engaged in stories that feel more self-contained.

A handful of the shorts are “slice of life” type shorts, showing the character in a particular moment as they lead up to bigger events (which may have been depicted in a show/movies). While these aren’t inherently bad, I’ve just never been a big fan of those type of stories. The Barriss Offee one is a good example, as I enjoyed seeing her perspective on the Clone Wars before she takes a turn. Karen Strong did a great job capturing her voice, and defining her ideals…But then it just ended.

It felt like the story was just getting started and I’d run out of pages. In some ways, it’s indicative of how well written the short was that I didn’t want it to end and was desperate to see what came next, but it’s also frustrating. Again, that’s how I’ve always felt regarding those kinds of stories. If you enjoy those, or they don’t bug you, then you’ll be just dandy.

Instead, I enjoyed the other stories—those with a clear, self-contained arc—a bit more. There’s a great new story for Asajj Ventress, showing her in a light rarely seen. Plus a great new story for Darth Maul set in the years after Revenge of the Sith; and even a thematically poignant story set in The High Republic. I mean, there’s some really great stuff here.

Regardless of whether a specific story worked for me as well, or not, there’s one thing universal to all of them: I was never bored. Despite coming in at a decent 352 pages, I breezed through all 10 short stories in a little more than a day.

To be entirely honest, I sometimes struggle with short stories. It’s hard to pinpoint exactly why. Sometimes it’s a mindset thing, where I know it’s short and I think it should be moving fast than it does. Sometimes it’s about how some stories feel truncated. Either way, there are a number of short story anthologies I’ve struggled to finish over the years.

Stories of Jedi and Sith never gave me that issue. They’re all very well written, and handled in a way that maintains a breakneck pace. Even as it challenges your ideas on certain aspects of the Force, and these characters, it keeps you turning the pages one after another in quick succession.

All in all, Stories of Jedi and Sith is a lot of fun. Star Wars novels have been killing it lately, but if you’re looking for new stuff, without feeling overwhelmed by the deluge of bigger novels lately, this is perfect for fans. You get many fan-favorite characters with new stories, and perspectives, but don’t feel like you have to commit a bunch of time to it.

Even if that’s not an issue, this is an easy one to breeze through while you wait for the next big Star Wars book release. Either way, I wouldn’t miss out on this one!