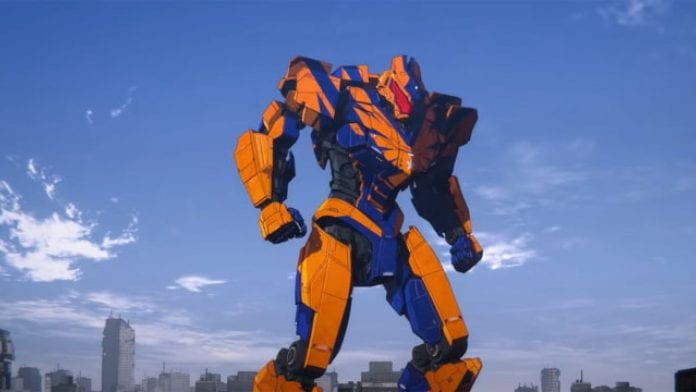 Later this week, Pacific Rim returns for more storytelling, this time in animated form. While I’m definitely not the biggest fan of the Pacific Rim films, everyone knows I love my monster action. As such, I knew I had to give Pacific Rim: The Black a shot. After getting a chance to check out the first three episodes, I can say I’m glad I did.

Don’t worry, I won’t be getting into any spoilers here, beyond what you’ve already seen in the trailers. Hell, to be honest, I’m not sure that I COULD spoil it based on the episodes I had the chance to check out. For the most part, these are setting things up for a larger overall story, one we only sort of tap into. That said, it certainly sets the stage in an intriguing way that expands on the lore we already know from the films and makes me really want to see what comes next.

In The Black, the Kaiju have been around for quite some time (definitely putting this series AFTER the events of the previous movie) and things haven’t gotten much better in the world. In fact, certain places have become so overrun with the alien monsters that they’ve been abandoned all together.

That’s where we find ourselves in this story, with teenage siblings Taylor and Hayley locked down in Australia after it had been given up and left to the Kaiju. As you would imagine, not everyone on a giant continent could be evacuated in time, and thus the survivors are left to fend for themselves.

The Black picks up roughly five years after Australia had been abandoned. Taylor and Hayley have survived all this time (after their Jaeger pilot parents left to get help but never returned) in a small, hidden, community. Along with others, they’ve eked out a living, harvesting their own crops, and staying under the radar of the giant monsters ravaging their land.

Hayley, the youngest, bucks at the limitations of being confined to a life of mere survival. She’s impulsive and always pushing her boundaries, a source of great contention for the brother who promised their parents he’d protect her.

This wanderlust sees Hayley inadvertently stumble upon an abandoned Jaeger base, once thought completely destroyed. There she discovers a treasure which had been left behind: a Jaeger. The giant robot, Atlas Destroyer, has been sitting underground this whole time and offers the siblings a chance to venture out into the world and discover what happened to their parents. The biggest problem, however, is Atlas was built as a training Jaeger and features no actual weapons to fight back with.

I’m trying to veer away from spoilers, so suffice it to say, this general idea forms the crux of the story. Taylor, having once been in the academy to become a Jaeger pilot, helps his sister through the basics, giving them a chance to explore the wasteland that was once their home. Along the way, however, they discover just how much has changed in the five years they’ve been hidden away.

For one, the Kaiju have almost fully and completely taken over the land. From watering holes, to even smaller (think horse-sized) creatures hunting in packs across desolate cities, the monsters are truly everywhere. It’s almost like they’ve taken over the ecosystem. Thus, the humans that remain must be more cautious, and heavily armed, than ever before.

In many ways, it feels like Mad Max meets Kaiju movies, a concept that feels uniquely perfect. The humans still around are deeply distrustful of one another and battle it out for scant resources. Even with giant monsters willing to destroy them, they have a hard time banding together for any sort of greater good. This element helps pad out the already impressive action the show delivers, and does a great job of keeping the stakes high even when the monsters are quiet in an episode.

One of the things I like best about The Black’s first few episodes is how they work independently from the films. Even if you haven’t watched the Pacific Rim movies, or it’s just been a while, the show is easy to get into without that prior knowledge. There’s enough exposition given at the start to get you up to speed on the state of the world.

Because it takes place in an entirely different location than the films, there aren’t many connective elements (characters, etc) to make you feel like you’re missing a key piece of the story. As such, audiences are able to enjoy it as its own thing. That said, there are still plenty of aspects that feel unique to the Pacific Rim universe that fans of the films have plenty to be excited about.

Since Taylor and Hayley have been in hiding, they have no idea what the world is like now. Using their point of view, audiences are able to learn right along with them. It offers the chance to dive deeper into the lore in a way that’s accessible to both hardcore fans and newcomers. We get a chance to see the devastation that’s been wrought on the continent, while also getting a glimpse at some of the shadier things the Governments were doing to survive…

As I mentioned, I only had the chance to see the first three episodes, which means there is a whole lot of setup without payoff at the moment. The things these opening episodes are teasing, however, have a whole lot of potential. From unknown experiments, crazy new Kaiju, and new weapons to fight back, there are some neat ideas I can’t wait to see explored through the rest of the season.

With slick animation and voice acting, this very much feels in-line with what you would expect from the anime genre. There’s plenty of high-drama and angst to go around, all while telling a larger story with big implications.

As someone who once thought I would be fine without any other Pacific Rim stories in my life, I find myself now eagerly awaiting the show’s drop on March 4th so I can consume the rest of the season!