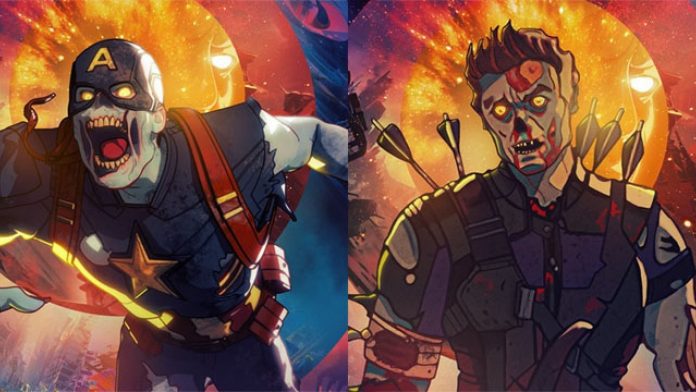 It’s finally here! The eagerly anticipated MCU adaptation of the classic Marvel Zombies comic has arrived, and it did not disappoint.

This episode gave us some of the darkest, gruesome, and surprisingly funny moments in the MCU to date. To briefly keep it spoiler-free I’ll try and give my most concise thoughts on today’s episode.

Without giving too much away, this episode was another great example of the incredible strength of the MCU and the opportunities pre-established content can present. What If…? once again takes what we think we know and flips it in unexpected, but genius, ways.

This episode is shockingly gruesome. From decapitation to dismemberment; it pulls no punches and I’m surprised it maintained that family-friendly rating. This is a good example of the opportunities that animation can present, allowing for sequences that could never make it to film.

Overall, the episode was a hell of a lot of fun. I gasped, I cringed, I laughed. This was easily my most anticipated episode of the show and I truly think it lived up to the hype.

The undead have assembled. Check out this new clip from the fifth episode of Marvel Studios' #WhatIf, now streaming on @DisneyPlus. #Hallowstream pic.twitter.com/oJA2yaZqf6

OK so if you’re reading this you have no doubt watched the episode but in a brief rundown. In an attempt to save Janet Van Dyne (just like in Ant-Man and the Wasp) Hank Pym unknowingly unleashes his zombified wife upon the world, leading to a cataclysmic worldwide Zombie plague that infects some of our most beloved heroes.

Like I mentioned before, the play with the timeline is a super fun aspect of this to me. Ant-Man and the Wasp being just weeks before Infinity War, gave a fantastic opportunity for familiar territory to be twisted on its head and allowed the writers to use Bruce Banner as the audience’s perspective.

Bruce finds himself in the middle of a ragtag zombie apocalypse Avengers. The line-up includes Spider-Man, Bucky Barnes, The Wasp, Okoye, Sharon Carter, Happy Hogan, and Scott Lang’s Russian friend Kurt. While all the other cast members returned to reprise their roles, Tom Holland did not. That said, Hudson Thames does a fantastic job as Spidey and sounds like Holland a lot of the time.

The ensemble was the highlight of the episode by far. Characters who we have barely seen interact and had little to no crossover—apart from a certain funeral—all assembled in the most broken version of the MCU. Their banter is hilarious, satisfying and shows us the fantastic potential of What If…?’s limitless storytelling.

As the episode progresses, we lose many a hero with Happy and Sharon being among the first to go; a gasp-worthy moment in my household where those two are favorites. Each action sequence and death is as tense you might expect in any zombie movie or show, and the threat of one of your favorite characters becoming a super-powered zombie is as overshadowing to the viewer as it is to the characters.

On that note, there are a good few zombie superheroes worth mentioning. As we learn from Jeffrey Wrights the Watcher, the virus spread in a matter of days and the Avengers were the first response so they quickly joined the ranks of the walking dead. The show wastes no time in showing us that, with a brutal execution of the Black Order from an undead Tony Stark, Doctor Strange, and Wong.

Later on, we meet a zombified Hawkeye and Falcon in Grand Central. Hawkeye’s accuracy seems somewhat lacking as a zombie, but Falcon is a terrifying and deadly aerial assailant. He beats down Bucky with a kick that echo’s Civil War. Just before I thought I’d see one of my favorite characters eat my other favorite character, Okoye slices Sam Wilson in half in a somewhat hidden but nonetheless brutal and disgusting moment. As I said, animation seems to have given them a lot of opportunities.

Later in the episode, we get Wasp exploding a zombie Sharon Carter from the inside and Bucky slicing his best friend in half with his own shield. “Sorry pal, guess this is the end of the line,” says Bucky in a fun but frankly depressing callback.

When the characters finally arrive at their destination (hoping to locate a cure at the source of a mysterious signal) they find Vision and a cured, body-less Scott Lang. Scott, much like Peter, is constantly quipping, desperately trying to make himself laugh rather than accept the traumatic and dark events that have transpired.

It’s not long before the big twist of the episode arrives though, as Bucky investigates the familiar facility of Camp Lehigh, he discovers the unthinkable. T’Challa, played wonderfully by the late Chadwick Boseman, is being kept in captivity by Vision, to feed the ravenous zombie of Wanda Maximoff. Found lying on a metal table with one leg missing, the scene is a reference to the Marvel Zombies comic in which Ant-Man kept T’Challa as his own food supply.

Once Wanda is discovered, Vision confesses to luring innocents to the camp to feed the undead Wanda, hoping to atone he attempts to help them escape and then ends his own life by giving them the Mind Stone, the key to a cure. At this point it has to be said; does Marvel not think we have seen Vision die enough already?

Anyway, chaos ensues as a zombie Scarlet Witch shows a surprising flush of emotion staring at the corpse of Vision, Bucky tries to hold her off but obviously poses no threat as she stops bullets in a very Matrix-esque moment. As Bucky is thrown away by Wanda without being bitten, I do expect his survival in a potential continuation.

By the last few minutes of the episode, all that remains is T’Challa, Peter Parker, and the head of Scott Lang, now able to mobilize with Doctor Strange’s cloak of levitation which funnily enough, had been tagging along with the whole episode. Hulk does battle with Wanda and the remaining heroes fly off to Wakanda, the last preserved human civilization…

Or so they had hoped. As every episode has, this ended with a miserable but intriguing cliff-hanger. Thanos still came to earth for the Infinity Stones, but this time he was turned into a zombie. The last image we see is a zombified Wakanda with an undead Thanos wielding five Infinity stones waiting to take the last.

All in all, this episode was a blast. While it took me a little bit to adjust to the humor, Peter Parker’s speech made me realize it was all a coping mechanism. The heroes know it’s the worst it can be, so how can they keep going? Rather than face the existential threat of an undead world, they quip and joke and try to keep fighting as best they can. I loved that; it’s an important message which serves as a cornerstone to all superhero stories.

What If…? has given Marvel a wonderful creative opportunity and it is yet to disappoint. This horror themed episode is another example of how the writers have taken 13 years and used our familiarity expertly to tell engaging and exciting twists on the world we know so well.