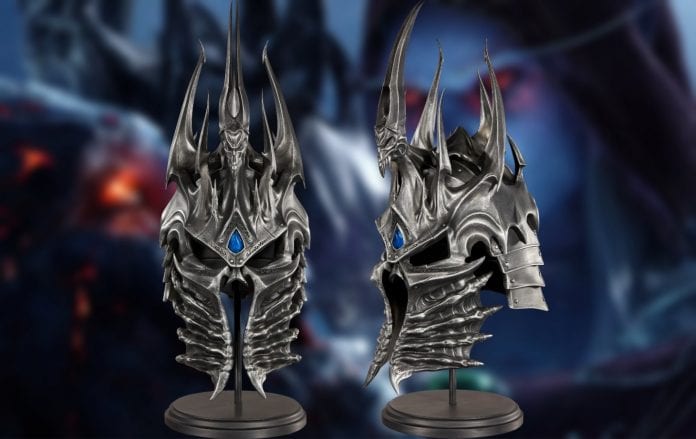 In order to help celebrate the 30th Anniversary of Blizzard, the company is releasing an impressive replica of Arthas’ Helm of Domination.

While I’m definitely not the biggest Warcraft/World of Warcraft fan on the site, but there’s no denying the insane awesomeness of this replica helmet. Blizzard has revealed the upcoming collectible (which is over 15 inches tall) as part of their 30th Anniversary celebration.

At over fifteen inches in height (nearly seventeen inches in stand), the Arthas Helm of Domination Blizzard Exclusive Replica brings to life one of Warcraft’s most powerful artifacts. Forged according to the Jailer’s will, the Helm of Domination was to be the vessel of Death’s influence on Azeroth. The Nathrezim imprisoned the spirit of the orc chieftain Ner’zhul within the helm, granting him command over a vast army of undead Scourge. The fallen Prince Arthas Menethil freed the Helm from the Frozen Throne, donning it to take up the mantle of the Lich King.

Fans will be able to purchase the Helm exclusively from Blizzard’s Gear Store on February 19th starting at 3 PM PT. This just so happens to coincide with BlizzCon Online!