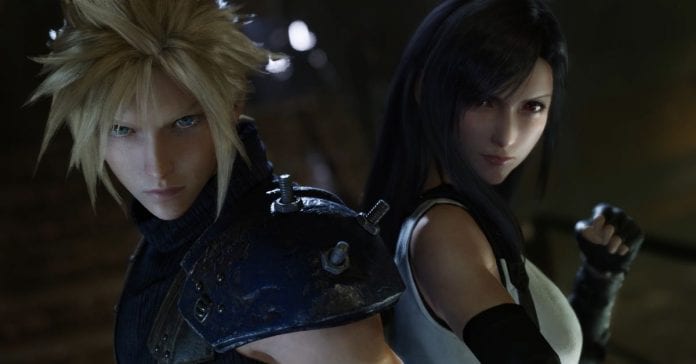 With the opportunity to finally dive into the Final Fantasy VII Remake, diehard Final Fantasy fan, Matt, delivers his impressions on the title.

After roughly three or so years of waiting, we finally got our first taste of Final Fantasy VII Remake! Over night, Square Enix released the Final Fantasy VII Remake Demo on the PlayStation Store. Unless you’ve been to E3 2019, PAX East or any other event where Square Enix was showing it off, this is the first time most got to experience the title. And IT. IS. FANTASTIC!

The Final Fantasy VII Remake Demo kicks off right where the upcoming game and the original begin, with Aerith on the streets of Midgar. Meanwhile Barrett, Avalanche, and their newly-hired merc, Cloud attempt to destroy the nearby Mako Reactor.

For starters, I absolutely loved the ground-level approach they took with this mission. The original game had players looking down at each level, as a type of overseer, but this view gives players a direct line of sight as to what’s going on. It makes you feel part of the action, like never before.

The action takes players down the familiar pathway to the Mako Reactor’s core, featuring some of the iconic scenes the original game was known for. However, it’s not exactly a step-for-step remake. The demo featured a few additional scenes with the President and a few more Cloud visions than I anticipated. Both were welcome, as the scenes with the President added to his nefarious ways and the scenes with Cloud provided a lot of foreshadow for what’s to come. I also really enjoyed how they approached the banter. In the original, the conversations between the crew were there to read, but they’re given more prominence with cinematics and even in conversations you can eavesdrop on. Plus, it’s really cool how the Final Fantasy VII Remake team made it to where you never miss it. They placed subtitles to the side, even if you want to get straight to the next part of the story.

What’s even more awesome is the voice acting and overall emotion from each character. Admittedly, I wasn’t sold on Steve Burton’s Cloud in the trailers, but hearing him in the demo is spot on. I openly laughed when Wedge is trying to endear himself to Cloud, to which Cloud responds “Not interested.” Thus, shutting him down completely. You couldn’t ask for a better Cloud Strife.

Plus, John Eric Bentley’s Barret is everything you’d ever want it to be. He’s passionate, stubborn, and when he preaches to the Avalanche team while Jessie and Cloud roll their eyes, it is just excellent. Finally, it was brief but I really like how Square Enix gave Jessie more of the limelight. You can tell in this expanded remake, she’s going to have a somewhat bigger role and I thought Erica Lindbeck played her really well.

Final Fantasy VII Remake is a major departure from the original in terms of combat mechanics. The classic turn-based style has mostly been done away with in favor of a hybrid free-fighting style. In it, you run around freely attacking whoever you like. Where it becomes a hybrid is how the game slows down for you to select specialty actions like Abilities, Spells, Items, and even Limit Breaks. You’re unable to perform these actions if your ATB gauge isn’t filled. It’s a major adjustment compared to the original, but I found myself really liking how fast and fierce each fight was. Plus, juggling multiple enemies was a lot of fun!

Something else that takes a bit getting used to is switching between characters, mid-battle. It’s not terribly difficult to do so, but it’s definitely an adjustment. Often times, I was trying to have Barret cast Thunder on enemies, but his ATB filled slowly. It took switching to him to fill it up faster to use his abilities more often. The transitions are fast and smooth, but it’s a mechanic that requires some practice.

One imperative function of switching is how each team member can help the other and how specialties can help prevent enemy attacks. For instance, there was a moment when Cloud was stuck in the Guard Scorpion’s grasp. Switching to Barret and shooting the enemy released Cloud and prevented further damage. Also, when the Guard Scorpion jumped on the wall for a long-distance attack, having Barret fire his own long-distance shots stopped the boss from attacking. That right there is teamwork!

Square Enix and the Final Fantasy VII Remake team found a way to make each ability feel heavier than they did previously. Cloud’s Punisher Mode heavy strikes, while slow, felt noticeably stronger than normal slashes, and the same could be said for specialty abilities like Braver. Barret’s Overcharge was no slouch, either. It hit like a tank!

While it is an adjustment, I had an absolute blast with the new combat mechanics. They’re fast, fun, powerful, and put the fate of winning or losing in your hands. That said, if that’s not really your speed, Final Fantasy VII Remake also has a “Classic Mode”, which essentially puts Cloud into auto-pilot to attack whenever he wants to and let you sit back and mainly control abilities, spells, and items when the ATB gauge is full. I personally didn’t like this mode, as much. It was entirely too hands-off for me.

Will ‘The Last of Us Part II’ Be a PlayStation 5 Launch Title?

Music for Camping in Space, an Interview with Andrew Prahlow about ‘Outer Wilds’

Oddworld’s Munch Deserves Another Chance at the Spotlight