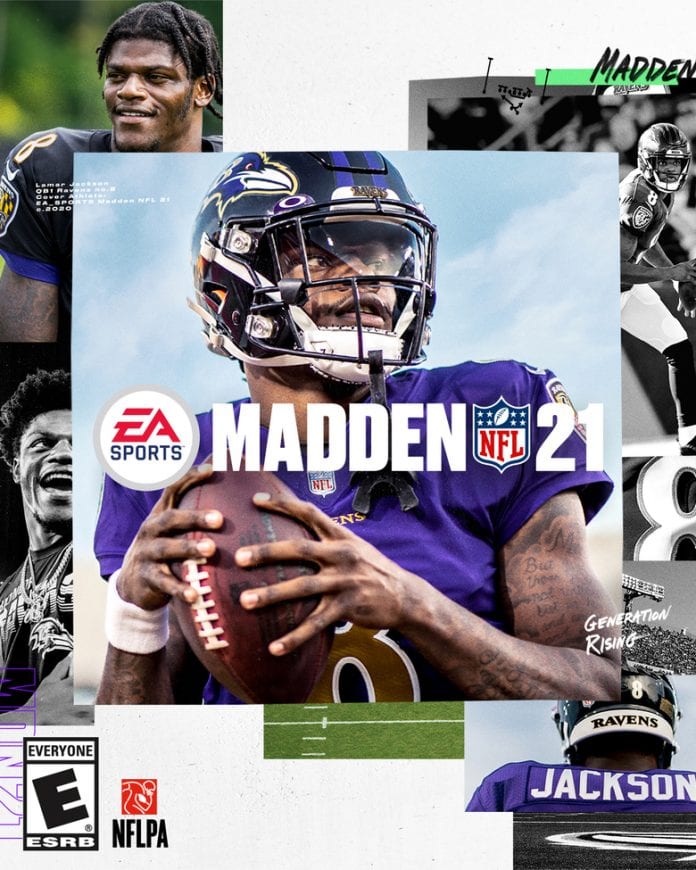 We’re still a little over a month away from the full game of Madden NFL 21 releasing on Xbox One, PlayStation 4, and PC. However, EA Sports invited us to preview the latest edition of their annual football game by taking part in a Madden NFL 21 Closed Beta. Here are our hands-on impressions of the beta. As Smooth & Authentic As Advertised (So Far)

Last month, the Official Gameplay Deep Dive for Madden NFL 21 highlighted a lot of new features EA Sports was bringing to this year’s Madden. Things like improved ball-carrier and enhanced D-Line mechanics, Realistic Open-Field Tackling, and new player-controlled celebrations. These are all improvements fans have been clamoring for, for years. Especially everyone who had a meltdown over an ill-timed ankle tackle.

I’m happy to report everything is as advertised in Madden NFL 21 (so far).

The Madden NFL 21 Beta only featured four teams, the Atlanta Falcons in their ugly new uniforms, the Tom Brady-led Tampa Bay Buccaneers, the Super Bowl Champion Kansas City Chiefs, and the Madden NFL 21 Cover Athlete and NFL MVP Lamar Jackson’s Baltimore Ravens. As with most betas, I was very limited with what I could do. Only Exhibition games against CPU and Online Head-to-Head were available to play. That said, I could play full games and I played them on All-Pro and All-Madden.

In my time playing the beta, I found the game felt a lot smoother in terms of playing as the ball-carrier. Whether I handed the ball off, passed it to a wide receiver, or just rolled out like Lamar Jackson, the new mechanics handled very well. I felt as if I had far more control in both the open field and backfield than I’ve had in previous Madden titles.

In the exhibition games played, I could choose precisely which hole I wanted to run through at the line of scrimmage and zoom past the opposing D-Line untouched. While that seems relatively simple, I found I was able to do this consistently and with plays I’ve notoriously had little success with. That said, when the likes of Ndamukong Suh or Calais Campbell blew through the O-Line before the play could get started, there was little I could do there, but those moments were few and far between. Another aspect of the new and improved ball-carrier mechanics are how smooth jukes and spin moves are. In the official trailer, they showed Lamar Jackson spin around an incoming defender, effortlessly. I had one of those same moments with Jackson and it was amazing. I also tried jukes with several running backs and I made a lot of DBs look foolish. It was an awesome feeling.

The last bit about the ball-carrier mechanics I’ll rave about is the new reaching ability ball-carriers now have. On most plays, players with the ball will reach for a few more yards. In some cases, I actually got first downs because of it. That’s completely different from previous games. I had far more 4 & inches in those instances. Now, I just get first downs, which is far more welcome.

While the offensive side of the ball felt smoother, overall, the features enhancing the defense were a refreshing, much needed change. In previous iterations of Madden, pass rush abilities were limited to pressing buttons multiple times to get past the offensive line. With a powerful enough lineman, it was relatively easy to produce sacks or tackles for loss. You could forget about it, if it was with anyone else. At times, it would be so difficult, you’d resort to having to just send a Defensive Back instead. What I loved about the enhanced D-Line mechanics is that all pass rush skills are relegated to just the right stick. It makes the experience so much easier and I found Defensive Ends and Tackles melting off of Offensive Lineman. I even produced several Tackles for Loss in my games. That said, the ball came out so fast in passing situations that I actually produced zero sacks with anyone on the defensive line. These new D-Line mechanics definitely disrupted plays, but it’ll be interesting to see if more sacks come from them when the full game releases.

Sticking with the defensive side of the ball, EA Sports is also working to insert more authentic tackling in Madden NFL 21. Despite a few bugs, I’ll be mentioning in the section below, Madden NFL 21 puts a bigger emphasis on form tackling. It seemed very natural how the players pursued and enacted on tackling the ball-carrier. That said, it was also very sensitive and there was hardly any room for error when diving at a player. I missed a lot of tackles, just by lunging too early.

Another part of the Beta I really found refreshing was the new crop of celebrations added to the game. EA Sports is FINALLY allowing players to celebrate every major achievement in the game of football. First Down. Do your Signature Celebration. Break up a pass. Flex on ‘em. Caught a 50 yard bomb in double coverage. Show some swagger. Score a touchdown. Celebrate with the whole team. In every meaningful moment, Madden NFL 21 lets you decide how to celebrate and it’s a lot of fun. It’s important to reiterate this was a beta. Therefore, a lot of issues and bugs I had will, no doubt, be corrected by the time the game releases in late August. This is just an overview of the oddities I experienced playing this early build of the game.

During my time with the Madden NFL 21 beta, the two major issues I had were skipping and switching players. The skipping I experienced within the games I played occurred often at random moments. It could be at a hand-off, passing play, tackling situations, whenever. When skipping occurred, it was often very brief and seemed as if the game jumped a few frames before returning to action. It was more of an annoyance within plays, more than anything else. That said, it happened every single time I went to kick a field goal. After I selected the power of the kick, the bar would almost always skip, throwing off your timing to select accuracy. This never hindered my games, but I did miss a small handful of kicks because of it.

What did hinder my games was the very suspect player switching I experienced. On defense, I’d often switch players to attack the ball-carrier. However, Madden would switch to someone either too far away or had already missed a tackle. This was an infuriating part of the beta and actually cost me big plays. I didn’t have this issue much in Madden NFL 20, but this is a frequent occurrence in Madden games that came before. I hope by the time the full game releases, both of these problems will be non-issues.

The rest of the problems I had were very minor in nature and mostly stemmed from graphics. Some players didn’t look natural. Even Lamar Jackson on the menu screen looked weird. These types of issues are normally corrected by the time the main game releases. It wouldn’t even surprise me if a lot of the things mentioned and more have already been perfected in the in-house build at EA Sports. When I played and reviewed Madden NFL 20, I deemed it the best Madden game EA Sports has developed in years. As this is just a beta, I can’t pass that crown to Madden 21, just yet. However, it has a lot of the same qualities that I loved about 20. The passing mechanics are flawless, the X-Factor and Superstar abilities are fun, and the real-time updated playbooks make it far more strategic. Now, add in the improved ball-carrier, d-line, and tackling mechanics, along with the added celebrations and it’s got a ton of promise.

The offensive side of the ball feels ridiculously dangerous with the new, smooth ball-carrier mechanics. Mix that with the already impeccable passing mechanics from the previous year and it has the makings of an unpredictable disaster for opposing teams. In fact, my play style became so unpredictable for my opponents that I was throwing 50+ yard bombs after running circles around them in previous plays.

Furthermore, with the improved tackling and the disruptive way in which Defensive Lines can affect plays, the defense also feels very formidable. In two back-to-back games, the defensive line disrupted so much that it caused hurried throws and, consequently, a lot of interceptions. Five interceptions to be exact, three of which went back for Touchdowns. That right there is balance.

That said, not balanced are a few of the players. Lamar Jackson is an absolute cheat code. The Madden NFL 21 Cover Athlete has the makings of being unstoppable. He’s so smooth and fast running out of the pocket. He’s also really accurate on deep balls. I torched so many teams with the Jackson-Hollywood Brown combination. Plus, the Ravens playbook perfectly compliments him. He’s no Patrick Mahomes II, Madden NFL 20’s Cover Athlete and cheat code, in the passing department, but he’s still an absolute beast and both are terrifying to play against.

I’m looking forward to the official player ratings releasing in the next few weeks, as rookies and players coming off of a stellar 2019-2020 campaign will impact the game. With those on the way and fixes coming to the complete Madden NFL 21 game, we could be in for another special Madden season.

Madden NFL 21 releases on August 28, 2020 for Xbox One, PlayStation 4, and PC. With Deluxe and MVP Editions, players can play Madden 21 three days early on August 25, 2020. Thanks to Electronic Arts’ Dual Entitlement program, players who purchase Madden NFL 21 for current-gen consoles will be able to upgrade their copy to Xbox Series X and PlayStation 5 for free, provided it’s for the same console brand, not physical to digital, and before Madden NFL 22 releases next year.

5 Shows That Should Return With G4TV