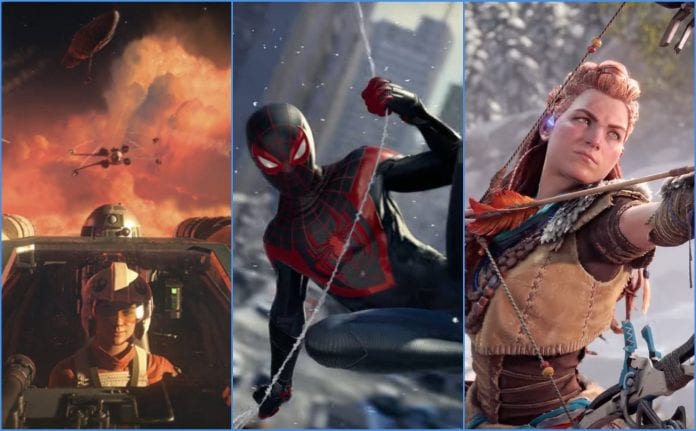 The past week has featured a slew of great looking games. As the Summer of Gaming continues, I’m breaking down the titles I’m most excited about.

Even though there’s no E3 this year, there’s been no shortage of game news and reveals. In fact, there may actually be MORE than usual. With developers doing their own virtual presentations, there’s a lot for gamers to feast their eyes on. Beyond that, we aren’t limited to a single week of big announcements either, but instead spaced out over the entire Summer.

As such, I can’t do my normal E3 Hype list. Instead I’ll be breaking it up into multiple parts as we continue to get more big virtual events down the road. From the upcoming EA Play to next month’s Xbox 20/20. For today, however, I’ll be sharing some thoughts on the most hype-inducing games revealed over the past week between The Guerrilla Collective and PlayStation 5’s big reveal event.

I don’t have these picks in any specific order, but I will say I have Horizon Forbidden West listed first because I don’t think I’ve been this excited in a long time. In fact, I think the last time I was this hyped was when the first Horizon game was revealed. Despite knowing this game was in development, this was the reveal trailer that blew me away. Once Aloy popped on the screen, I literally jumped out of my seat during the livestream.

The first game is such an amazing treat. On top of featuring an immersive world/characters, and ridiculously fun gameplay, it’s open world format feels genuinely rewarding to explore. This trailer looks to take all those elements I loved and takes them to another level. Beyond the amazing looking new creatures, I’m very excited about expanding the story and seeing those weather elements come into play. I don’t even need another trailer, this is an instant purchase.

I can’t think of a better way to kick off the PlayStation 5 showcase. Insomniac’s Spider-Man game is not only one of the best comic book games around, it’s easily one of the best games of the generation. Based on its sales numbers and critical reception, a sequel is a sure thing.

While there was some confusion around whether it was an expansion to the first game, DLC, or what (it’s a standalone in the same vein as inFAMOUS: Last Light and Uncharted: Lost Legacy), it’s no less exciting. Getting to play as Miles Morales in his very own Spider-Man game is pretty damn awesome. It’s nice to see the continuity of that story (and gameplay) still moving forward. Though it won’t be a full on sequel, it will definitely help keep us occupied while we wait for one.

Look, I’m a relatively simple man. I see sim management games, I’m interested. Give them a Sci-Fi slant and throw in some grand scale base-building to boot, and you can almost guarantee I’ll be picking it up.

That seems to be the case with Per Aspera, revealed as part of the Guerrilla Collective. Gamers are tasked with helping to both colonize and terraform the planet mars. So not only are you building up a base, you’re trying to manage multiple colonies and weather conditions to ensure the survival of a whole planet. Couple that with some alien enemies to combat with and there’s a lot to love.

The gameplay, just based off the brief trailer we saw, looks to keep the perspective fairly wide. This may not appeal to everyone, but I definitely dig the more simplistic aesthetics that allow for deeper diving into actual strategizing.

Please just inject this game directly into my veins. I’m a sucker for space combat games and have been since the original Star Fox. Rogue Squadron remains one of my all time favorite Star Wars titles (along with its sequels and Jedi Starfighter) and the genre has been sorely missing from the new slate of Star Wars projects.

Thankfully, despite only getting this one trailer for now, I can say it looks like my prayers have been answered. From the deeper dive into strategy elements of flying (balancing power between engines/shields/weapons), impressive visuals, and a new story after the fall of the Empire, there’s a lot to be excited about.

Not to mention getting to see familiar faces like Wedge and Hera Syndulla and some other connections to the Star Wars Alphabet Squadron books…While it’s a smaller game (only $40) there’s some real potential in Squadrons to deliver an experience many of us have been clamoring for.

This debut title took my breath away during the PlayStation 5 event. From a visual standpoint, it looks stunning and like you’re playing through an intricately animated movie. The blend of fantastical elements are dazzling; and even with it’s “softer” visual flair, there are hints of a deeper and darker storyline worth exploring.

Not to mention the gameplay elements itself. The developers, Ember Lab, describe it as a story driven action/adventure title, all of which I normally love. Combine that with some world manipulation for puzzle-solving and some platforming elements and I almost don’t even need to see any more.

There are PLENTY more game reveals on the horizon (some even this week), so I’ll keep my picks for this first round down to five. Which of the recently revealed games are you most excited about playing?