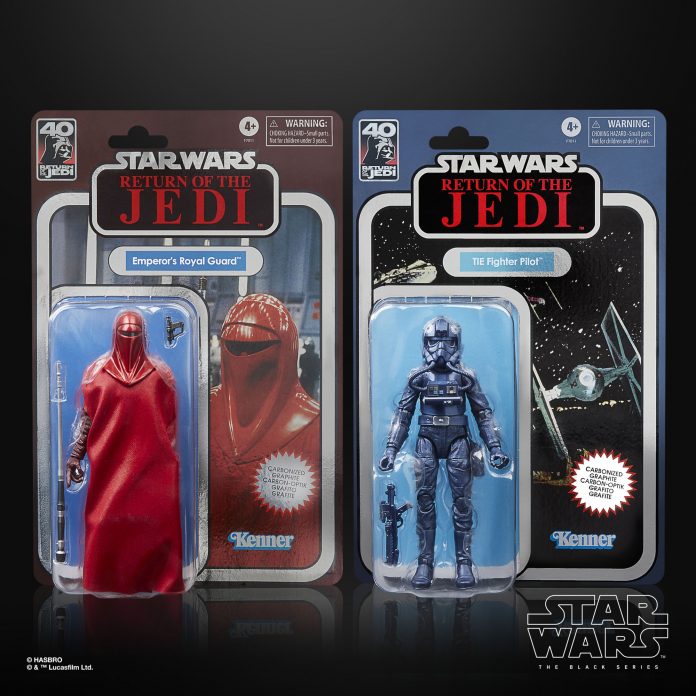 As part of the weekly Bring Home the Galaxy reveals, Hasbro pulled the curtain back on a new Amazon exclusive that’s bringing back the carbonized Black Series figures!

[Update: The post has been updated to include the links (affiliate ones) to pre-order.]

Look, I understand I’m largely in the majority of collectors who enjoyed the Carbonized series line. Yes, I get they’re just sparkly repaints, but they look cool!

As such, I’m super excited to see this line getting more love and attention as part of the upcoming 40th Anniversary Return of the Jedi line of figures. Like the previous 40th figures, they’ll be recreating the original figure packaging, but this upcoming two-pack (which is exclusive to Amazon) will add the Carbonized twist:

Resplendent in crimson robes and armor, the Emperor’s Royal Guard protected the Emperor. Imperial pilots were treated as expendable, but the Empire treated its TIE pilots as important parts of its war machine. STAR WARS fans and collectors can imagine scenes from the STAR WARS galaxy with these premium 6-inch scale ROYAL GUARD & PILOT figures, inspired by the characters from STAR WARS: RETURN OF THE JEDI. Fans and collectors can display these fully articulated figures featuring a sleek metallic finish and premium detail with multiple points of articulation, in their collection. Includes 2 figures and 2 entertainment-inspired accessories.

These figures are set to arrive in Spring 2023, and pre-orders will go live TOMORROW, November 16th at 1pm ET.