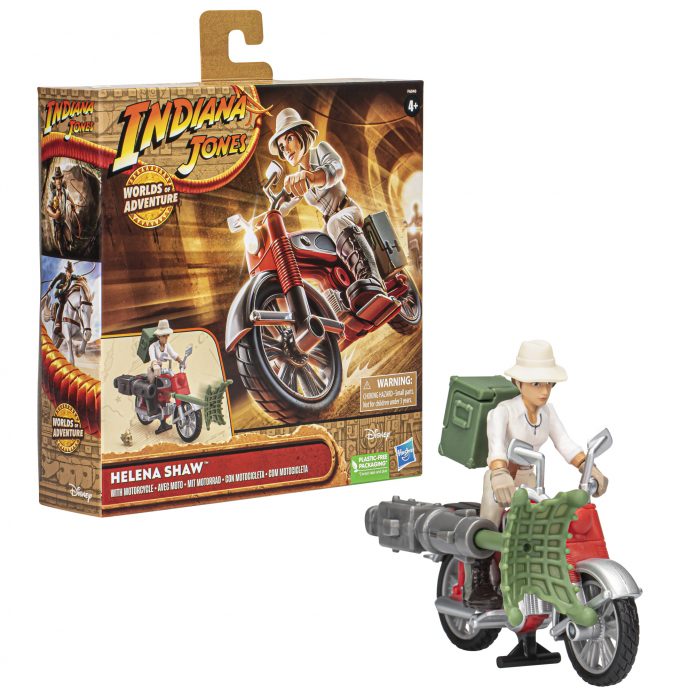 During a livestream this morning, Hasbro revealed even more Indiana Jones toys coming to fans/collectors later this year!

This past October, Hasbro revealed they’re ramping things up with all new lines of Indiana Jones themed toys as the world preps for the all new film. This morning, they offered fans another glimpse at the stuff they have cooking up including more of the Retro Series figures, the six-inch line, a new series geared towards younger kids, and more.

Let’s talk about the new ‘Worlds of Adventure’ line-up. This one is designed for younger players with the figures coming in at just 2.5 inches (much like the Star Wars Mission Fleet line). I know they’re for children, but I REALLY love these line of figures. It includes some fun accessories, the designs are sleek and fun, while also allowing for a new generation to get in on the fun.

As for the next set of six-inch figures, from the Adventure Series line, Hasbro has revealed two new figures based on The Last Crusade. There’s Indiana Jones dressed up in his college professor attire, and then there’s the villainous Walter Donovan. Not going to lie, it’s ridiculously cool to see the Donovan figure includes an alternate head sculpt that captures his rapid-aging death from the film’s conclusion. Just a neat extra detail I’m sure collectors will be all about.

Both of these are Walmart exclusive figures set to hit Spring 2023. And speaking of exclusives…

Here’s the ‘Club Obi Wan’ Indiana Jones figure, featuring his attire from the opening scene in Temple of Doom. This will only be hitting Target (Spring 2023 as well) with pre-orders going live tomorrow afternoon at 1PM ET.

If you’re looking for some fun play factor stuff, Hasbro also revealed this new 12-inch Indiana Jones action figure that includes various sound effects/dialog AND whip-cracking action! Like the others, this will also be hitting store shelves this Spring.

For collector’s looking to pick up those swanky Retro collection figures, you’ve got a few more to put on your list when they launch this Spring. There’s Rene Belloq (Ceremonial), Marion Ravenwood, Toht, and the German Mechanic (propeller blade sold separately).

Lastly, there’s a new role-playing toy for kiddos to pick up in the form of the Action-Crackin’ Whip. Because, you know, all parents want to buy their kids a whip! Don’t worry, however, as it’s not a functional whip, but still has some coll elements to let kiddos (safely) re-live their favorite moments as the iconic archeologist.

Which of these new Indiana Jones toys are you looking forward to most?