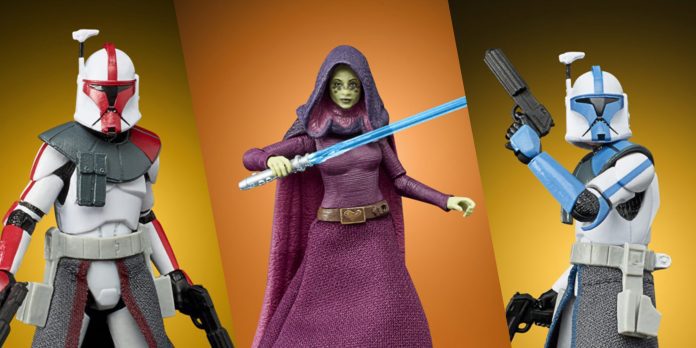 If you haven’t had enough Star Wars toy reveals this morning, then you’re in luck, Hasbro has more to give your wallet the shakes.

Easily the thing I’ve loved most about Hasbro’s Lucasfilm 50th Anniversary line of figures, is how it’s given ALL eras of Star Wars fans something to enjoy. From using classic packaging, to even giving us characters based off the books/comics, it’s been great to see the love thrown around.

Now, Genndy Tartakovsky’s Clone Wars “microseries” is getting some of that same attention:

Fans of the series will be excited to see a new line of Vintage Collection figures are coming based on their interpretations in that cartoon. I’m loving the cardbacks for these, and feel my resolve on picking up 3.75 inch figures vanishing.

It’s a bummer we don’t get to see what these figures’ packaging looks like, but I’m very excited to see what these Black Series interpretations will look like. Would have loved to get Aayla, Bariss, and Luminara in the 6-inch scale (we’ve only got a bunch of Dude Jedi from the Prequel time period), but hopefully we’ll get those at some point.

All of these figures will launch in Spring 2022 and are coming exclusively to Walmart (I know, I know) with pre-orders live now. Which of these will you be picking up?