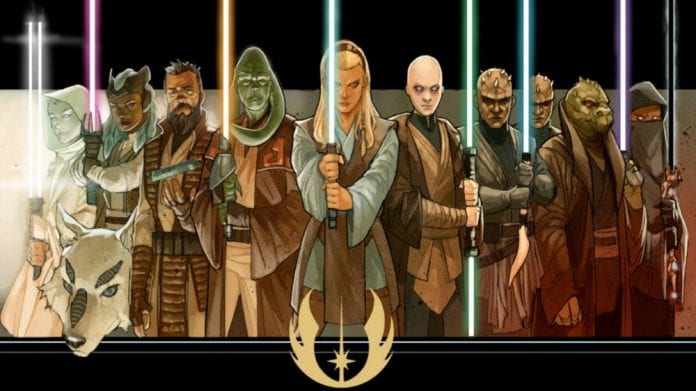 As part of our week-long celebration of Star Wars: The High Republic, we’re breaking down the best new Jedi characters.

One of the more exciting elements of Star Wars: The High Republic is getting to explore the galaxy far, far away with (almost) all new characters. Unburdened by the family drama of the Skywalkers, the initial offering of The High Republic stories introduce a ridiculous amount of great new heroes—and villains—for fans to latch onto.

Despite the deluge of new characters, the authors have done an excellent job of making each of the newcomers feel distinct and almost instantly engaging. Since we’re celebrating The High Republic this week (to mark it’s arrival) I thought it’d be fun to take a look at some of my favorite new Jedi characters and why they stand out to me.

Since the books just launched I’m going to still veer away from any plot spoilers, though some teeny-tiny tidbits might sneak in there. Overall, I think you’ll be fine reading on, but if you want to go into the stories 100% blind, maybe come back later….

Even though Light of the Jedi is an ensemble story, the cover-adorning Jedi Master feels about as close to a “main character” as the book gets. Avar feels specifically designed to be the Jedi character we all fall in love with. Well, the mission was definitely accomplished.

While she’s young for a Jedi Master, Avar is already well-revered within the entire Order. Her poise and determination set the standard and her skills give others something to aspire to. In many ways, she feels like the ideal Jedi; the epitome of what the best of the Order can, and should, be. She’s a showcase for the good the Jedi can do to the rest of the galaxy’s denizens, while still feeling relatable.

Porter has a smaller role in Light of the Jedi, but even so, he made quite the impression on me. Engle is an Ikkrukkian (sadly, no picture of Porter has been revealed yet, so what you see above is an example of the species) who’s something of a legend among other Jedi. In his 300 years as a Jedi, he’s done just about everything, but now enjoys a quieter life as a cook in the Outer Rim for the Jedi’s Elphrona Outpost.

Porter feels like a grandfatherly character, always looking out for the younger generation, while keeping “the adults” in line. Don’t mistake that charm for weakness, however, as Porter is also known as the “Blade of Bardotta.”

Sadly, we don’t get any specifics on how the Jedi acquired this name (though it probably has something to do with how he lost his eye and got a wicked scar along the face), but the implication is clear. He’s a badass. Even in his advanced age, he can make quick work of any threat. He’s a Jedi with a story I hope we get to learn more about.

Orla is an Umbaran Jedi with a sleek sense of style who appears in Claudia Gray’s Into the Dark. She likes to forge her own path and has designated herself a “Wayseeker” which is a Jedi who doesn’t follow the mandates of the Jedi Council.

There have been a few Wayseekers within the Order and it essentially boils down to Jedi who feel their destiny lies elsewhere, or doesn’t completely line-up with the strictures. They’re still welcomed as part of the community but are essentially left to their own devices to figure out how they can best serve the Force.

Orla’s reasoning is interesting itself (and spoiler-filled so I won’t go into it here) and left me very eager to see where her personal journey goes next. Not to mention the fact she wields a double-bladed hinged Lightsaber like the one we saw Rey’s dark side manifestation use in The Rise of Skywalker. I’m a simple man and that factor alone is just about enough to put her on this list—but there’s much more than that to love about Orla.

This is another who features prominently in Light of the Jedi and has a close relationship with Avar Kriss and Stellan Gios (who takes the focus of the next full novel, The Rising Storm). The trio grew up together and formed a tight bond as Padawans, one that has continued into their adult years.

Where Avar and Stellan have already attained the rank of “Master,” Elzar remains behind, mostly due to his thoughts on how the Force should be used. He dislikes using the Force the same way twice and spends much of his time researching Jedi abilities that have been lost to time. He’s always experimenting and things don’t always work out. As such, he’s seen as a bit unreliable, which holds him back.

This alone makes for an interesting character, as he provides a perspective that feels different yet relatable. His easy-going, non-chalant attitude is also compelling. Feeling like equal parts Qui-Gon Jinn and Rael Averross (from Claudia Gray’s Master & Apprentice), Elzar is easy to love and generally feels like a person I’d love to hang out with.

Though only a Padawan, Reath Silas quickly became one of my favorites. He’s the primary focus of Into the Dark and goes on a whirlwind journey. Where so many Jedi of this era are presented as high-powered superheroes, Reath feels like an Average Joe. He’s not particularly strong in the Force and knows he has to work/study harder than his peers to keep up.

This persistence makes him instantly relatable, and his perspective as one still learning makes for a perfect POV for readers. I loved seeing him grow throughout the book and excited to see him return in the next YA novel. He’s still a bit naive, but his sincerity makes him impossible to dislike.

Okay, technically I’m cheating here, but Ty Yorrick is way to cool to not give a mention. Technically, she’s not a Jedi. Instead, she’s a Force-sensitive “Saber for Hire” who works as a Monster Hunter. She’s not set to debut until The Rising Storm, so we don’t have much information to go on, but from what little I’ve seen, I’m beyond excited.

For one, she looks badass, with a super cool Lightsaber hilt. Secondly, I LOVE monster stories/adventures, and Yorrick seems like our gateway to getting into some of those. Combined with a mysterious past that has seen her grow to prominence even outside the Order, and I’m having a hard time waiting for her debut in June.

It’s crazy to think these first few The High Republic stories introduce so many awesome Jedi for fans to love. I could keep going on this list and still not cover all the ones who caught my attention (and that’s not even getting into the compelling villains/non-Jedi). Based off the announcements yesterday, it looks like we’ll be spending plenty of time with them all for years to come.

Which new Jedi are you most excited to learn more about from The High Republic?