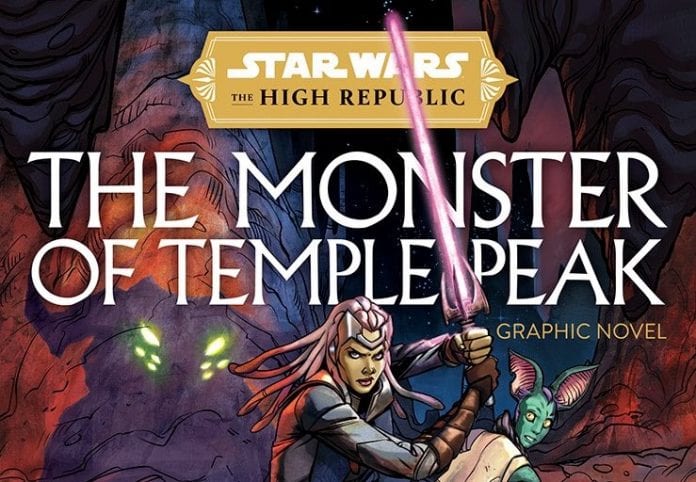 During this morning’s live-stream to celebrate the launch of Star Wars: The High Republic, new novels, graphic novels, and cover art were revealed!

[Update: A little bit after posting this news, we got word on a pair of release dates!

The original story follows below.]

To help ring in the new era of Star Wars storytelling, The High Republic, a live-stream with the authors/creative team behind the initial stories was held. As they shared their thoughts on the upcoming era, the fun they’ve had along the way, the end of the stream also brought eager fans MORE great looking books to look forward to:

Cavan Scott and Rachael Stott are developing an original graphic novel called The Monster of Temple Peak! Super excited about this one, as I love graphic novels, and it’s something we haven’t seen in the modern era of Star Wars. Also, I’m all about monsters and monster hunting.

On top of continuing work on the IDW comic series, Daniel Jose Older is writing a “middle-grade” book, Race to Crashpoint Tower. This book takes place during the same timeframe as the previously announced novel, The Rising Storm.

The next Young Adult book is coming from Justina Ireland with, Out of the Shadows, which is a play on Claudia Gray’s Into the Dark. The novel will include characters from Into the Dark as well as from Ireland’s own, A Test of Courage.

Ireland is keeping busier still by also working on an original Manga story (from VIZ Media) called The Edge of Balance. Co-written by Shima Shinya with art from Mizuki Sakakibara, this is the first part of a new series. Star Wars manga isn’t exactly new, but so far it’s all been adaptations of other novels, so it’s exciting to see a completely new story in this medium.

If all that’s not enough for you, they announced that Star Wars Insider will continue to publish serialized The High Republic stories (focused on the non-Jedi characters) in their magazine. Suffice it to say, there’s a LOT of stories to look forward to in this era, and apparently ALL of these are slated to arrive this year/Summer. Sadly, we don’t have firm release dates just yet, but that’s exciting nonetheless.

We also learned that all of the books currently announced (including these above) are part of Phase I of the storytelling initiative, which will go through the year and into 2022. The last big announcement made was the reveal of their THREE phases:

So yeah, this is a big multi-year, multi-medium endeavor and I couldn’t be more excited. The initial slate of books are incredible and if they manage to keep it up, Star Wars fans have some incredible years to look forward to.

Which of these new announcements are you looking forward to most?