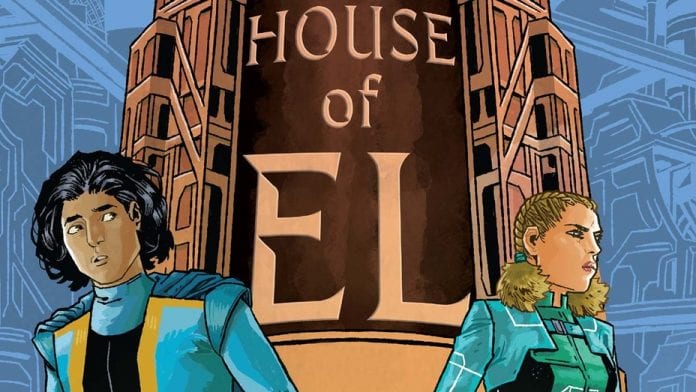 *warning: minor spoilers for House of El Book One: The Shadow Threat below

If you’ve been looking for a new story set on Superman’s home planet of Krypton, then do I have a story for you, in the shape of House of El Book One: The Shadow Threat.

I primarily know Claudia Gray as a writer of Star Wars novels, being a particular fan of Master & Apprentice and Leia: Princess of Alderaan. But when I saw in a comic book ad that Claudia Gray had also written a DC comics story set on Krypton before it ripped itself apart, I instantly knew I needed to check it out. For one, Claudia Gray’s writing is simply wonderful, so I know I’ll like most stories by her. And for another thing, I feel like there could always be more stories set on Krypton, and I’ll happily read anything that sheds more light on Krypton’s civilization before its destruction.

As the name implies, House of El Book One: The Shadow Threat, is the first installment in a series, a trilogy in this case, one that takes us to Krypton in its final months of life (though very few know that as yet). But rather than focusing, as other DC comics have done, on Jor-El and his quest to save his son Kal-El (though Jor-El, it should be noted, does appear), Gray’s story primarily follows Zahn-Re, an elite member of Krypton’s upper caste and Sera-Ur, a soldier from one of Krypton’s lower castes. Together, in their own ways, they’re slowly discovering that something is seriously wrong with Krypton, both with its government and the planet itself.

There are details in this story that are eerily appropriate given what’s been going on in American politics for the last few months. A major element of the story is the Kryptonian government consistently denying the existence of massive quakes that are slowly but surely ripping Krypton apart. Repeated messages essentially ask the Kryptonian public to disbelieve their own eyes (sound familiar?) and deny that the quakes are a sign of any underlying issues with the planet. It seems almost unbelievable that a civilization this advanced could have leaders so stupid but Gray explains the root of the problem quite well (with a little assistance from Jor-El).

The entire story is tinged with sadness, as any fan of DC comics knows that Krypton is ultimately doomed no matter what the heroes attempt to save it. It’s interesting to see how Zahn and Sera are reacting to being caught up in a situation that has them both way in over their heads. Zahn is a somewhat naive idealist who goes on one time too many about “hope” while Sera provides a refreshing counterweight of cynicism to balance it all out. What’s really intriguing to me is how the obvious answer (i.e. Krypton is doomed) is looming in front of everyone’s faces but no one sees it or, if they do, is willing to say it out loud. Gray has created a fantastic world that lives in a state of denial that feels very sickeningly familiar, a reminder that even the most “advanced” civilizations can have fatal flaws.

It was also a good choice to have two main characters from opposite sides of Krypton’s caste system, as this gives you a good feel for how different life on Krypton can be depending on the cast you were born into. It’s made very clear that life on Krypton, while it can be amazing for those at the top, is also severely messed up for pretty much everyone below that (which, again, should feel familiar to American readers).

The art style of House of El is really pretty. As you might expect with a story set on Krypton, there’s a lot of scenery devoted to showing off the beauty of Krypton, as well as the not so pleasant parts where the lower castes live. I will say Jor-El’s character design is a little different from what I’m used to seeing for the character, but that’s really nitpicking if I’m honest. One other nitpick? I wish the book was slightly larger in size to allow more space on each page for Eric Zawadzki’s beautiful artwork.

House of El Book One: The Shadow Threat is a great story, one that promises a lot more intrigue to come in the next two installments. Once you check out this book, you’ll never look at life on Krypton in quite the same way again.