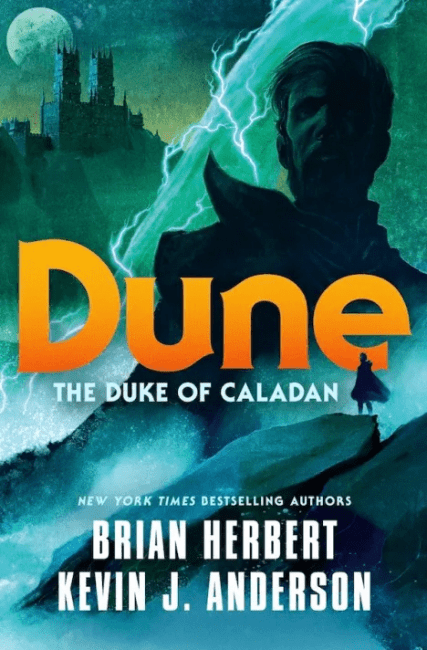 The lead up to the new Dune movie is bringing long time fans all sorts of goodies to enjoy, even though the film itself has now been pushed into late next year. From toys, comic adaptations, and even a new trilogy of novels from Brian Herbert and Kevin J. Anderson. The writing pair are no strangers to Dune, having written more books set in the Dune universe than the original series from Frank Herbert! For several years, however, they backed away from the series in pursuit of other projects.

Now, they’re back with Dune: The Duke of Caladan, an all new prequel that tells a story preceding the main events of the classic novel.  The story this time around takes place roughly just a year before the events of the main Dune story. That’s not a whole lot of time to work with, but they’ve managed to bring up some interesting ideas throughout.

The story kicks off with Duke Leto traveling to see the Emperor’s new Museum, built to celebrate his family’s 10,000 year rule. When an organization dedicated to bringing down the Imperium stages a brazen, and brutal, attack on the opening event the universe is thrown into chaos.

Having barely escaped, Leto returns home to contemplate his own place within the hierarchy of the universe. While he’s content to rule his planet of Caladan, he cannot escape the events of the larger Empire, especially as other enemies begin to see the Duke potentially rising to “undue” prominence.

Elsewhere, the Bene Gesserit witches are still working to correct the path of their breeding program, one thrown in flux when Jessica birthed Paul. As they work their machinations to control the situation, along with the leaders of the Landsraad, the pressures of the Duke begin to mount. Soon he must decide what the best course of action for his family, and heir, will be…Or risk losing it all.

I don’t want to get into any spoilers, so I’ll keep the plot down to that, but as is the case with any Dune book, there are a lot of things going on. Wheels within wheels, if you will. The expected cast of characters appear, including Baron Harkonnen, Gurney Halleck, Duncan Idaho, and many more. On top of these familiar faces, however, the novel manages to introduce a host of new characters into the mix to flesh out both the story and overall world we know.

It seems a silly thing, but one of the things I liked most about Duke of Caladan was the fact that it comes in just a little over 300 pages. Normal page counts for this duo’s previous Dune novels came in at least around the 500 page mark. That’s not necessarily a bad thing, but makes it tough to get those re-reads going.

Their writing style definitely feels more directed, leaving out some extraneous elements (which held back many of their previous novels) and staying focused on the story being told. It felt more concise and flowed smoothly, resulting in me breezing through this novel much quicker than anticipated.

Even though it’s easily their shortest novel, I think they managed to pack in just as much action and story intrigue as their other novels. There’s a surprising amount of action to be found, ranging from personal one-on-one style sequences, to full-scale epic Sci-Fi battles. There’s still plenty of political intrigue going on, motivating it all, but the action helps move the book along at a swift pace you won’t want to put down.

Even better, it feels inclusive even for readers who haven’t read their previous prequel novels. While there are references in abundance to events from those books (specifically the Prelude to Dune trilogy as well as the in-between-quel Paul of Dune), they don’t feel like required reading to enjoy this one. Just a knowledge of the initial Dune novel feels like enough. Considering this is built as a way to move directly into the main story–and next year’s movie–it’s nice they were able to keep it friendly for newcomers, while still offering some deep references for long-time fans to enjoy.

That said, Duke of Caladan manages to stumble in some all too familiar area for long-time readers. Namely, it’s a story that feels too big for the novel. It’s very much the first book in a trilogy, rather than working on its own. Considering the majority of the original Dune novels were able to work individually as well as together, it’s an issue fans have dealt with through all of Brian and KJA’s novels.

That doesn’t mean they’re necessarily bad, but it gets a bit frustrating to know you’re only getting a part of the story. It makes the novel itself feel incomplete rather than something I can enjoy on its own merits. That said, I love the story being set up. It has some interesting ideas that haven’t been explored just yet, adding a new angle to the characters we know and love.

The other nagging issue I had with the novel has to do with the timeline. Prequel stories always face an uphill battle, especially when so much lore has already been established. Their early Dune novels mostly avoided this by setting the action far enough in the past (both when Leto was Paul’s age and several thousands of years prior) that minor details wouldn’t be conflicting.

Duke of Caladan, however, gets as close to the original novel as possible. In fact, it doesn’t seem possible. There’s a much bigger story teased in this novel than I can see play out within just the year time span they have to play with over the next two novels. Hell, I’m not even sure how much time has passed in this novel. It feels like months (or at least several weeks) have passed during the events of the story.

It’s a distraction. More than that, it also steals any real tension from the events in the book. Even as it presents seemingly insurmountable tasks, just knowing that a few months later they’ll be together and heading to Arrakis, takes some of that thunder away.

Don’t get me wrong, I’m interested in HOW these plot points will be resolved, but the sense of urgency/danger just isn’t there. I found myself thinking more about how the time frame is going to work, rather than certain events in the story itself.

I’m a big fan of Dune. Much like it is with Star Wars, I’m more than happy to gobble up any new story set within the Dune universe and be happy to see it’s not dead. Duke of Caladan manages to be one of Brian Herbert and Kevin J. Anderson’s best Dune novels. By tightening up the story and writing style they’ve delivered on a more dynamic and fast paced adventure that’s simultaneously easy for newer fans to the franchise and those who’ve been around for a while.

Bringing in a host of familiar characters, the story offers some unique ideas and story beats that I’m eager to see play out. A lack of tension and inability to tell a complete story on its own feel like all too familiar problems for those who’ve read their previous books. I’m very eager to get the FULL story out of this trilogy, but it certainly leaves Duke of Caladan a bit weaker for it.