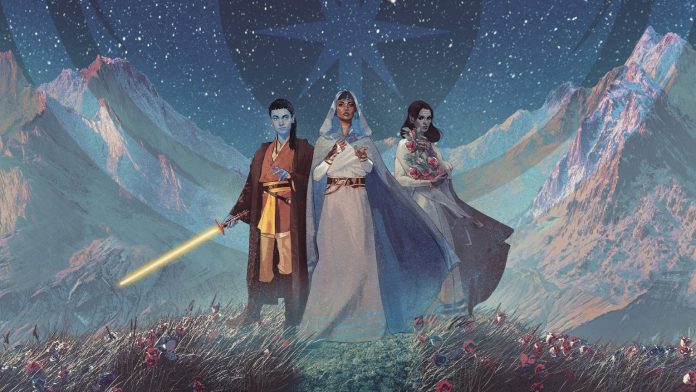 Star Wars: The High Republic returns this week with the launch of Path of Deceit, which gives Phase II a thrilling start.

The High Republic publishing initiative has been one of the best things in Star Wars. With every book hitting the bestsellers list and all the comics going for multiple printings, it’s safe to say the engaging new characters and time period have resonated with fans. It’s been damn good.

With the close of Phase I dramatically altering the path of the story, fans are understandably eager to dive back into it…but Phase II isn’t giving up the goods that easily. Rather than picking up where we left off (with Starlight Beacon underwater and Marchion Ro seemingly victorious), instead we’re going back even further into the past.

Path of Deceit brings fans 150 years before the events of The High Republic‘s first phase. The Republic is working to expand their influence, and Pathfinder teams traverse the Outer Rim of the galaxy to chart new hyperspace lanes and uncover new planets/species they can help. When Force-related artifacts begin to go missing, or are outright stolen from others, and Jedi Master Zallah Macri and her Padawan, Kevmo Zink, are tasked with investigating.

Their search finds them on the Outer Rim planet of Dalna where they come into contact with the Path of the Open Hand; one of many groups dedicated to the Force in their own way. Difference here, however, is the Path believes NO ONE should be allowed to use the Force, and thus they see the Jedi as dangerous wielders actively hurting the Force and throwing things out of balance.

It’s an interesting concept, and I loved how this book explores the idea of all these different Force-sects (or Cults depending on how you look at things) existing in the galaxy in tandem with the Jedi. Considering we’ve spent so much time in Star Wars during an era where the Emperor has done everything he can to suppress ANY knowledge of the Force outside his own power…it’s refreshing to see how diversified the beliefs are.

Among The Path’s followers are a pair of Evereni (the same race as Marchion Ro); cousins named Yana and Marda Ro. Yeah, I’m sure there’s nothing at all ominous about those names or anything…

Yana seeks to escape the Path and venture out on her own, while Marda is among the group’s most ardent believers. When the Jedi arrive on the planet, both of them see a chance to prove themselves and get what they want. Yana, a chance for her and her girlfriend to live the life they want, and Marda the opportunity to show her faith by trying to convert the young Jedi Kevmo (who she just so happens to be smitten with).

All of the Path answer to “The Mother” a relative newcomer to the Dalna, but with her gift of “Prophecy” and almost supernatural charimsa has placed her in charge of the entire Order. As the Jedi investigation brings them closer to the Path, Mother’s machinations begin to take shape and unfold.

There’s a lot going on in this book, and I don’t want to get much more into it to avoid risking major spoilers. Between a blossoming young love, a growing mystery, and a surprising amount of action, Path of Deceit does a lot despite being contained (mostly) on a single planet. It’s a blast.

By and large, Path of Deceit keeps the central story pretty focused on the Jedi’s investigation to the missing artifacts and events happening on Dalna. While it alludes to bigger events within the galaxy, it keeps things tight on the central characters. Even so, it’s easy to see how the events within the novel (especially in the final third) have massive implications for the story going forward…

On the surface, it seems like a weird choice to have Phase II jump 150 years into the past. All these big things happen, you essentially end on a cliffhanger, and then you slap another prequel—with an all new set of characters—right in the middle of it all. Yet…it works.

I won’t go into any specific story details on how, but I was really impressed with how connected these new stories still feel to the “main” events of The High Republic. In many ways, despite knowing Path of Deceit is 150 years earlier, it felt like I was returning to the era/story I love.

There wasn’t any setup needed to get us primed and ready for the new time period like we needed when THR initially started. Thanks to all the hints and references to things in the past from the previous phase, we’re able to dive right into the thick of things without feeling lost. Combined with several specific/direct connections to certain events in the other books (maybe even an answer or two), and the writers have managed to make this all new story, with all new characters, feel instantly familiar.

Thanks to some publishing delays, this Phase of The High Republic is starting off with a Young Adult novel, rather than the adult novel that typically lead the way for each story wave. Having also had the opportunity to have read the OTHER books in this wave (Convergence and Quest for the Hidden City), it feels like Path of Deceit is actually the most logical starting point for it all.

The basic story and conversations we see with the main characters offer insight into the larger galaxy and how things currently stand at this point in time. Even though it jumps right into things, you never feel lost in the larger scale of galactic events. You’re given enough heads up about other events/characters that by the time you get to the other books covering those aspects, you feel like you’re ahead of the game, and right where the larger story wants you to be.

It’s important to note even with ALL that going on, Path of Deceit still manages to work as a general starting point for fans. You won’t have to speed-read through all of The High Republic Phase I in order to enjoy the story being told here. While there are deeper connections for those who have, it remains an accessible adventure story for those who are just now dipping their toes into this era.

A big reason for this boils down to the writing skills of Authors Tessa Gratton and Justina Ireland. Ireland has already dominated Star Wars with some impressive outings, and it’s clear she hasn’t missed a step here. The pair work wonderfully together and manage to craft a seamless story filled with engaging characters.

Seriously, I’m not big on the romance aspect of Young Adult books, but I’ll be damned if I wasn’t the biggest cheerleader for Kevmo and Marda. Even though it’s a whirlwind, puppy-love situation, and you know how things must go considering he’s a Jedi, it’s still fascinating to watch them interact with each other. Their youth and passion for their convictions make it easy to root for them, while also providing crucial insight into BOTH of their Orders (without any need for heavy exposition dumps).

Subtle worldbuilding like that, and how effortless the prose flows between dialog and action, makes Path of Deceit a ridiculously quick read. Even though the pacing of the story isn’t breakneck, you’ll find it hard to put down for the evening. It’s one of those, “one more chapter” kind of reads and before you know it…it’s over.

If there’s anything in Path of Deceit that didn’t completely work for me, it’s the ending. Not the ending of the story itself or where the characters wound up, but how clearly it sets the stage for whatever comes next. One of the things I love most about The High Republic books is that, aside from a couple stories, everything manages to work on its own. While they contribute to the larger overall story, the books managed to tell their own stories that felt complete on its own.

Path of Deceit, however, very much feels like it ends as a setup for more rather than being a standalone story. But perhaps that’s just my initial thoughts speaking…

The ending felt a bit weird at first. Not anti-climatic (a ton of stuff happens), but certainly off. But the more I thought about it—dwelling on certain events, even writing this review—something became abundantly clear: the characters I thought were the focus of the story, were actually secondary. Once I shifted my perspective onto the actual central characters, I looked back on the book in an entirely different light.

I know I’m probably not explaining this the best way, but I’m trying to keep things vague and not spoil anything. Regardless, this revelation hit me like a ton of bricks and had me reevaluating numerous scenes/events in the book. I don’t know entirely if the authors designed Path of Deceit this way, but not having this epiphany until later on took a book I enjoyed and turned it into one I loved and can’t stop thinking about. Who knows, perhaps I’m just dumb and should have seen it from the start!

Either way, it’s a great little twist on the Star Wars stories we’ve seen so far, especially in The High Republic era. It makes for some genuinely surprising moments and I suspect will make a future re-read all the more enjoyable.

Though it may not have originally been intended to kick of the second Phase of The High Republic, Path of Deceit is a wonderful starting point. Not only does it bring eager fans back into this era with ease, it works just as well for those looking to get started altogether. With excellent characters, fun lore, an engaging story, and impressive writing, you’ll be done with this book before you know it and eager for more.

Don’t skip out on this Star Wars novel.