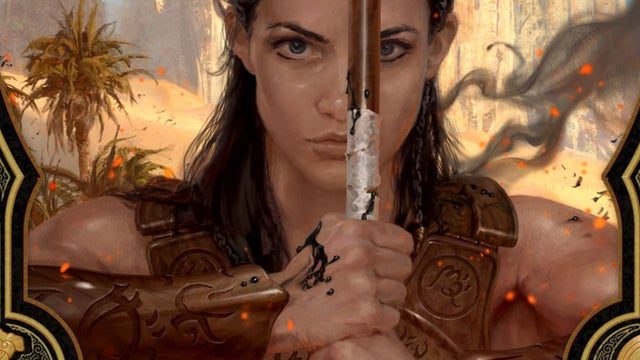 Peter V. Brett returns to the world of the Demon Cycle with The Desert Prince; an all new tale focusing on the next generation of heroes…and it’s pretty great.

There are few fantasy book/story tropes I love more than the “next-generation” one. Not just new characters set within the same world, but taking the children of the heroes we grew to know and love and giving them an adventure of their own. I firmly blame the Dragonlance books on sparking my joy for those kinds of stories, then Sara Douglass’ Wayfarer Redemption, and whole bunch of others.

No matter what it is, feed that children picking up the story stuff straight into my veins. As such, when I heard that Peter V. Brett was developing just such a story for his previously released Demon Cycle series, I knew I HAD to get in on it.

It’s quite fortuitous actually, as I just read the entire five book series just last year. I missed out on them when they initially launched (kicking off in 2008), but once I started, I couldn’t stop. The unique world crafted, and engaging characters kept me glued to the story, page after page. While the ending given was satisfying on its own, and felt like it brought the story to a solid conclusion, the rich world held plenty of room for more.

The Desert Prince not only manages to take the elements that made the previous books so enthralling, but sets up a brand new story arc that feels like it could be just as epic.

The Desert Prince picks up the story 15 years after the events of the the final novel in the Demon Cycle, The Core (if you haven’t read those, well, I’ve got some spoilers for you). The story is divided between two perspectives, putting the focus on Olive Paper and Darin Bales, both of whom of the children of the people who saved the world from the Demons.

The war is long over, and the world has begun moving on, but the weight of their parents’ legacy are weighing on the kids. Olive, who’s mother is the famed “Duchess of Hollow” Leesha Paper and father is the Krasnian leader, feels trapped in her life as a princess. With little to no freedom, having her movements watched at every step, seeks some level of normalcy.

Darin, the son of “The Deliverer” Arlen Bales, knows he fails to live up to his father’s almost mythological status. Arlen was the one who found the magic necessary to fight back against the Demons, and ended up becoming one of the most powerful men on the planet. Darin, however, wants only to live a quiet life and be more of an entertainer than anything else.

These seem like your typical teenager problems in a world that has changed drastically from before. Yet, as they seek to escape the shadows of their legendary parents, a new threat comes into focus. While the Demons (or Corelings) were beaten back and repelled 15 years prior, they’re far from dead. In fact, they seem to be rallying and turning their attention directly onto Darin and Olive.

The threat becomes big enough that Olive and Darin’s parents head out to investigate the sudden resurgence in the hopes of averting a second all out war. When they fail to return however, and Olive mysteriously vanishes in the night, the kids will have to step up to save each other and discover what happened to their parents. The path forward, however, will bring them up against an enemy even their parents couldn’t defeat…

At a little over 600 pages, there’s obviously a whole lot more going on in the story than that. I’m trying to veer away from spoilers, however, so I think I’ll leave it at that. What you end up with is all of the impressive action and heart that made the original books so great. Though the previous characters you already know are still around and play some important roles, the novel does an excellent job of ensuring the younger generation is front and center, never overshadowed.

Where The Desert Prince takes its basic idea from a typical fantasy novel trope, it manages to change it up to feel entirely refreshing. Where the story ended up going was nowhere what I imagined even 100 pages into it.

Beyond telling a new adventure, and setting up the return of a world-altering danger, the novel is very much a coming-of-age story for these kids. Having been burdened with their family’s heritage, they must come to terms with who THEY are as individuals and their place in this world. They most definitely aren’t their parents, but they have their own set of abilities in a world intent on making them fit into a specific mold.

This seems to be the novel’s central theme, as each character (even those beyond our primary perspectives) seek to shake off the shackles of expectations and discover who they can be. What I loved most about this approach, is how Brett ensured that each of the characters had similar problems, but come about them in different ways. They have unique problems, but in each other see the “freedom” they so desperately seek.

As the story continues, leading to bigger revelations, we get to see them grow into their own. Not only becoming heroes in their own right, but becoming the people they wish to be. I loved how it took that approach to the story and characters. It managed to expertly weave together familiar elements with entirely new aspects that will clearly have a dramatic impact on the world going forward.

From a fan perspective, this gave me time to get adjusted to the new main characters and come to care about them on a level beyond simply being connected to my favorite characters. Rather than feeling like an all new beginning, The Desert Prince managed to feel like a continuation of the story I already loved. The result of this combination, the novel was instantly engaging and ridiculously hard to put down. Seriously, I managed to breeze through this novel in just a week. I didn’t even read the original novels that fast!

Speaking of, I should probably mention that it would be best to read the Demon Cycle novels before diving into The Desert Prince. Though it’s the beginning of a new story with it’s own protagonists and antagonists, and intended to be accessible to newcomers…it definitely benefits from the previous story.

The magic system in place is fairly intricate and without the knowledge of the previous books, I wouldn’t have understood how it works in context of the story. It takes shortcuts with other parts of the story and characters that fans of the series wouldn’t notice, but would seem odd to those starting out on The Desert Prince. That said, consider this as my recommendation to read ALL of them if you haven’t already.

Overall, I love Peter V. Brett’s writing style and approach to these stories. He manages to deliver exciting characters and bring thrilling action that feels ripped straight out of a movie. Combine that with an interesting world and unique magic system and there’s no wonder why his books have captivated so many.

In The Desert Prince, it feels like Brett is in top form and improved even from his previous work. There were some….problematic elements in the first couple books, but you can clearly see how he’s moved on from those aspects and brings a more mature approach to certain bits of the story. He even mentions having sensitivity readers this time around in his acknowledgments, showing his willingness to be inclusive and aware of potential issues. Considering some of the things being dealt with, like Olive’s intersex nature, it was great to see the level of growth and self-awareness from the author.

By and large, the novel shows how Brett has grown as an author, bringing his already stellar prose to another level. Even so, there’s still one niggling problem I had while reading. It’s an issue I had with some of the previous novels and deals with the pacing. While the book shifts the focus between characters, there comes a point where it stops for a long while and only gives us the one perspective. When it jumps back to the other characters, we play a little bit of catch-up over what they’ve been up to in the weeks/months our attention was elsewhere.

It bugs me. It felt like too much of a character at once, and there were a handful of times I found my attention wandering as I was eager to know what the others were up to. By the time the perspective finally shifted, I was so invested in the other story that I didn’t WANT to go back.

All in all, it’s a relatively minor issue and might only be something that’s a problem for me personally. Considering it was something that bugged me in the previous novels, it was just kind of frustrating to see it pop up again this time around. Even so, this is far from a deal-breaking issue. With the breakneck pace the book sets, you’ll be past that part quick enough to be forgiving.

I really loved The Desert Prince. I was excited to be able to dive back into this beautiful world and it absolutely delivered. It feels like Peter V. Brett didn’t miss a beat in returning to these characters, and managed to introduce new ones who are just as endearing. The novel works wonderfully as its own thing, though it masterfully sets up an all new story arc that has the potential to eclipse the original.

I’m hooked, and I think you will be too. If you’re looking for some great fantasy fiction to end your Summer reading on, The Desert Prince is an excellent choice.