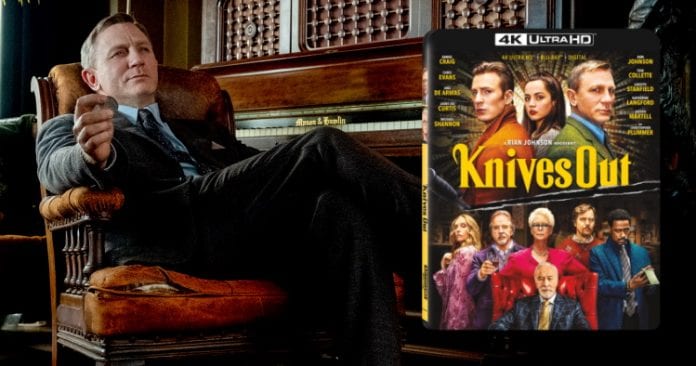 Written, produced, and directed by filmmaker Rian Johnson (Star Wars: The Last Jedi, Looper), and produced by Ram Bergman (Star Wars: The Last Jedi, Looper) and Johnson through T-Street, the film is Certified Fresh on Rotten Tomatoes™ at 97% (as of 1/21/20) and has received awards from AFI, National Board of Review, New York Film Critics, Philadelphia Film Festival, The Hollywood Critics Association, Rotten Tomatoes’ Golden Tomatoes Awards, and more. The circumstances surrounding the death of crime novelist Harlan Thrombey are mysterious, but there’s one thing that renowned Detective Benoit Blanc knows for sure—everyone in the wildly dysfunctional Thrombey family is a suspect. Now, Blanc must sift through a web of lies and red herrings to uncover the truth.

Take home Knives Out and immerse yourself in the mystery with special features including audio commentary and in-theatre commentary by filmmaker Rian Johnson, two never-before-seen deleted scenes, the eight-part “Making a Murder” documentary, the “Rian Johnson: Planning the Perfect Murder” featurette, a Q&A with the director and cast, and so much more.

Experience four times the resolution of full HD with the 4K Ultra HD Combo Pack, which includes Dolby Vision, bringing entertainment to life through ultra-vivid picture quality. When compared to a standard picture, Dolby Vision can deliver spectacular colors never before seen on a screen, highlights that are up to 40 times brighter, and blacks that are 10 times darker.

Additionally, the 4K Ultra HD Combo Pack features Dolby Atmos, which will transport viewers from an ordinary moment into an extraordinary experience with moving audio that flows all around them. Fans will feel like they’re inside the action as the sounds of people, places, things, and music come alive with breathtaking realism and move throughout the space.

Click here to order Knives Out on 4K UHD from Amazon!